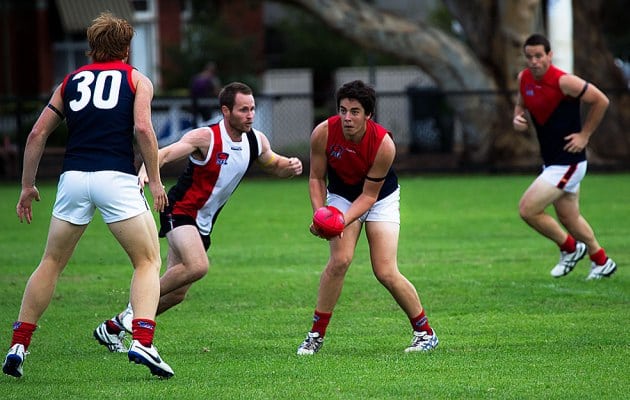 Tweet
DIVISION 1 - ROUND 1 WRAP-UP will be available following the completion of Round 1 (Good Friday match to be played between Heatherton and East Malvern).

The 2014 season is underway and round 1 saw a few surprise results but also laid the foundation for an exciting season.

After an unbeaten 2013 season, the Doveton Eagles suffered their first loss in a year when they went down to the Caulfield Bears by 24 points. Despite leading by 35 points at quarter time, the Eagles were outscored 13 goals to 4 the rest of the way to see their unbeaten streak end. The class of the Bears midfield shone and they showed that they are potentially a side to watch out for. New Bears recruit Joel Butler was among the best with 2 goals.

In recent years, Oakleigh have had the wood over Springvale in the battle of the districts but the Demons got one back after fighting off a late surge from Oakleigh to win by 4 points at Princess Highway Reserve. The Demons lead by 24 points at the third quarter break but a 4 goal to 1 final quarter by the Oaks nearly stole them the game. Dylan Bramble was among the best for Springvale with 4 goals while ever reliable Paul Fermanis was the best for Oakleigh.

In one of the few blowouts in round 1, Murrumbeena had a resounding 59 point victory over Moorabbin Kangaroos at Widdop Crescent Reserve on Saturday. After spearhead Daniel Willis left the club, questions were raised about the Beena’s ability to kick a high score. Those questions were answered as the team piled on 12.26 with 10 different goalkickers. Mitch Walder led the charge with 3 goals.

In a match-up of two of the premiership favourites, the Bloods put their foot down and declared themselves early favourites for the 2014 flag with a comfortable 41 point victory over Highett at Turner Road Reserve. The Bloods lead from start to finish as their midfield dominated all day and new recruit James Morris having the perfect start to the season bagging 6 goals.

In a battle between two clubs destined for finals contention, the Skye Bombers took out a close round 1 match-up against Hampton at Carrum Downs Reserve. A close contest all day, the game was tied going into the final quarter but a strong defensive effort from Skye saw them victorious by 13 points. Ben Walker was the best for Skye with 2 goals while Brendan Bennett had one of his better games as a Hammer booting 5 goals.

Endeavour Hills made it two wins in a row, allowing Hallam only three behinds in the final quarter at Barry Simon Reserve. This was the only close result in this round of lopsided matches. The Falcons’ winning margin was 10 points, over a Hawks side that has been competitive in both its matches. Shane Peake booted three goals for the Falcons, adding to his five last week, and Neil Peake was their best.

At home, Lyndale has kept second spot on the ladder, comfortably accounting for Dandenong. Like last week, the Redlegs were close until the first change and then fell away, losing by 52 points. Brad Carroll put through five goals for the Pumas and was named their best player.

After the excitement of an away win, South Yarra failed to maintain its momentum at home, despite being within a point of Black Rock at three quarter time. The Jets took off in the final term, unleashing a nine-goal assault, whilst the Lions managed a miserable two behinds, with the final margin blowing out to 55 points. Tom Dewar kicked five goals for the Jets and was named as one of their best, behind Jay Williams.

Following a round 1 scare, Carrum Patterson Lakes left nothing to chance this time, jumping out of the blocks with six goals before the first change, whilst Sandown managed one.  The Lions were never challenged and claimed a 64-point victory. Trevor March had a day out at Roy Dore Reserve, falling only a goal short of double figures, and was not surprisingly named their best player.

National Geographic’s website warns, “mountain lions do not like to share their territory and are constantly on the look out for invaders.” Unfortunately, Ashwood discovered what happens when invaders visit Mt Waverley’s home ground. The Mountain Lions had 11 goal kickers including James Gough, who booted seven. He was also named in their best, behind Ben Stacey and Ben Beecroft. The Magpies were left 115 points adrift, and the Mountain Lions boast an astounding percentage of 515.25.

2014 certainly began with a bang in the Under 19 competition, with five teams having convincing round one victories.

Bentleigh had no troubles dismantling Carrum Patterson Lakes, finishing 97 point winners. The Demons kicked eight goals to none in the first quarter, and Nicholas Lowrie finished with six for the day.

St Pauls travelled to Turner Road to face Highett, and the teams were locked at three goals apiece at the first change. The Doggies however, proved to be too strong, getting off the leash and running away with a 12 goal victory. Carl Herbstreit and Connor Wilson were the best on the day for St Pauls.

In what was perhaps the closest match of the round, Chelsea Heights held off a determined Skye outfit to record a 40 point victory. Skye had brought the margin to only 21 at the final break, but outstanding performances from Erish Uthayakumar and Lachlan Dobson ensured that the Heighters went home with the four points.

It was a real war of attrition at Meade Reserve as Clayton defeated Cheltenham by 45 points. Goals were flowing in the first half and the Clays took a 34 point lead into the major change, but only two goals were kicked in the second half, both to Clayton. The Clays had eight separate goal kickers and Billy Van Den Ham was best afield.

Finally Dingley kept Hampton goalless for the entire day, and Warwick Nichols kicked five in a big 128 point win for the Dingoes.

Skye and Cerberus fought out a close one, with Skye eventually holding out as nine point victors. Only one point separated the teams at three-quarter time, but a great display from Matthew Chaplin ensured victory for the Bombers.

Cheltenham had a big victory away from home as Clayton couldn’t kick a major. 70 points was the final margin; Tim Lawson and Brenton Poole were the best on the day for Cheltenham.

Ten individual goal-kickers for Dingley resulted in a huge win over Dandenong at Souter Oval. The Redlegs' only goal came in the final quarter, and the 115 point final margin would have delighted Dingoes fans.

There was another massive win at Mayfield Reserve; Mount Waverley kicked 24 to Doveton’s two. Despite displaying dominance all day, Mount Waverley never took their foot off the gas, with eight goals in the last quarter.

Black Rock recorded a comfortable victory over South Yarra, however the margin could have been larger had the Jets kicked more accurately. 14 goals and 20 behinds meant the margin was limited to 77 points.

Finally Sandown held off a fast finishing Moorabbin to record their first victory of the season. The Roos kicked five goals to none in the last term, but it was too little, too late, the Cobras would hold on. Four goals to Matthew Mccormick was a highlight for Sandown.