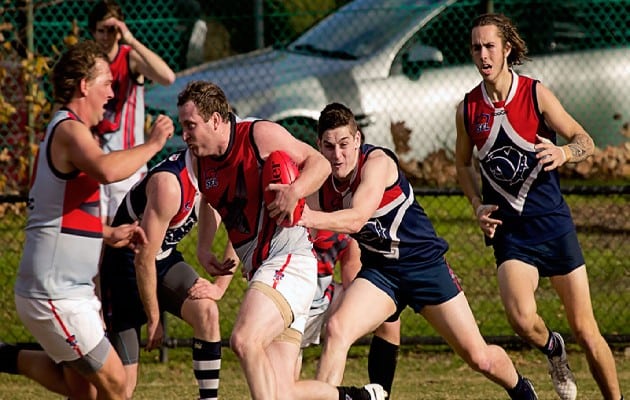 St Pauls has consolidated third spot on the ladder after downing a gallant Bentleigh outfit by 32 points at McKinnon Reserve. The two sides traded goals in the first half before the Doggies gained the ascendancy in the premiership quarter through the brilliance of Harley Ambrose. Dale Hynes and Mitch Allamby kept the Demons in the contest for most of the afternoon, but eight goals from Luke James and Travis Ridgeway ultimately proved the difference.

Chelsea Heights strengthened its grip on that all-important fifth spot with a percentage-boosting win over Clayton at Beazley Reserve. The Heighters were hot from the get-go, with a five-goal-to-nil opening-term salvo setting the scene for the 57-point rout. Ash Beasy slotted a lazy seven majors for the home side, but it was four from Luke Newton that stole the show. Alex Johnston impressed for the Clays.

East Malvern’s year of improvement continued as it defeated St Kilda City by 26 points at Dunlop Reserve. The Panthers kept the Saints goalless in the first half to take an unassailable 44-point lead into the sheds. Kristian Economou led the visitors’ charge in the second half, but it wasn’t enough to as Paul De Koeyer and Matty Carroll guided their side to their fourth win of the season.

Over at Jack Barker Oval Dingley proved too good for the fourth-placed Rosellas. The undefeated Dingoes blew the game open with a seven-goal second term, and with Jackson Peet and Adam Stock in scintillating touch they cruised to a seemingly effortless 46-point victory. Ben Fahey and Pat Bolger were among the best for Cheltenham.

The final game was as one-sided as you are likely to see; East Brighton embarrassing Heatherton by a colossal 181 points. Superstar Vampire Dean Williamson blew out the cobwebs with a stunning seven-goal, best afield performance while teammate Damien Lynch booted six. Cameron Moon’s efforts were a rare shining light for the Tunners, who were held scoreless for the first three quarters.

As the season ticked over halfway, the top 2 is all but finalised while it appears the race for the remaining three spots is down to four teams.

Mordialloc remained on top of the ladder with a convincing 69 point victory against Doveton at Ben Kavanagh Reserve. After a low scoring grinding victory against Skye the week before, the Bloods were back to their blistering best kicking 15 goals. They also played a good defensive game restricting Doveton to only 5 goals for the match. Carey Neville was among the best for the Bloods kicking 3 goals.

Caulfield may have secured a chance at a finals berth while dashing the finals hopes of another with an impressive victory against Murrumbeena away from home. Caulfield displayed excellent forward pressure in the second half, resulting in a 5 goal third quarter. Though they failed to score a major in the final term, the Bears managed to hang on to victory and a top 5 spot. Adam Connell had 5 goals for the victors.

Hampton moved to within half a game of a top 5 spot after defeating Oakleigh Districts at the Tool Shed. The Hammers got away to an impressive start kicking 6 goals in the opening term and restricting Oakleigh to only a solitary point. After quarter time, Oakleigh managed to outscore Hampton 10 goals to 6 but it wasn’t enough as the Hammers ran away 19 point winners. Chris Worner had 4 goals for Hampton.

Springvale moved into 3rd spot on the ladder after a comfortable victory against Moorabbin at Springvale Reserve. The Demons were less than convincing in the first half before flicking the switch in the second half kicking 17 goals to 7. Springvale’s midfielders did the majority of the damage and showed how dangerous they are going to be come finals time. Gav Vassallo and Clint Brooks combined for 13 goals.

Skye bounced back from their first loss of the season with another grinding victory against Highett away from home. After a goalless first quarter, Skye kicked 4 goals in the second to take a 15 point lead into half time. After the break, the Bombers turned their defence into offence, kicking 8 third quarter goals to seal the game before resorting to their tried and true defensive methods in the final term. Luke Mcguinness finished with 5 goals for Skye.

Black Rock was not daunted by the task of taking on Carrum Patterson Lakes at Roy Dore Reserve, and skipped out to a 22-point quarter time lead. The Jets still held the lead at the long break, but only by a couple of points. Unfortunately for them, it proved to be another valiant effort without reward as CPL got home by 10 points. After making the Lions work so hard for a win in both clashes this year, the Jets will feel in with a good chance if these teams meet in the finals. James Dent was again impressive for the Lions, being their best for the second week running, and Joel Dalton went one goal better than last week with six.

Lyndale hosted Sandown, and at three quarter time the Pumas led by 19 points in a low scoring contest. The Cobras struck back in the last term with five goals to one, claiming an 11-point victory. Their best was Jake D’Atri. For the beaten Pumas, Trevor Kumetaitis contributed four of their seven goals.

Away team Hallam took it up to South Yarra in a hard-fought battle, clinging to a one-point lead with a term to go. The Lions finished the match strongly with five goals to one to record a 22-point win. Jordy Cellini kicked three goals for them, and their best player was Tom Hanney.

Ashwood is getting used to winning, making it two on the trot with a 13-point triumph at Endeavour Hills’ home ground. It was a close contest throughout the day, and was anyone’s game with the Magpies leading by two goals at the last change. Chris Meyers starred with five goals, and was the winner’s best player ahead of Tim Smith.

Dandenong faced a mammoth task on Mount Waverley’s home turf and the Redlegs fought hard in the first quarter, being only seven points behind at the break. Just as in the round 1 clash between these sides, Dandenong failed to trouble the scorers in the second quarter. Things got progressively worse for the Redlegs, and by the final siren the Mountain Lions had completed a 104-point demolition. Ben Beecroft was named their best and Joey Rickard booted five goals for them.

It looked as if we had a close match on our hands when Chelsea Heights lead Clayton at quarter time at Beazley Reserve. However, it wasn’t the case as the Clays exploded; kicking 20 goals to two from that point for a 125 point win. Mason Lambert was unstoppable with nine goals and Tom Looi was also instrumental.

St Pauls took it all the way against the previously untouchable Bentleigh, and nearly caused the upset of the season. Five goals to the Doggies’ Zac Spencer was key, as was the five kicked by the Dees’ Liam Dimattina. Bentleigh hung on by four points, and St Pauls proved they can take it to the best sides.

Carrum Patterson Lakes cruised to a comfortable against Hampton as they ran out 46 point winners. Cam Neale and Liam Swift both kicked bags for CPL, and seven goals in the last quarter was too much for the Hammers to handle.

Both of Highett and Skye showed some excellent defensive abilities in their clash, with only eight goals being scored at half time in what was looking like an arm wrestle. However, the Bombers opened the floodgates in the second half, kicking 14 goals and winning by 71 points.

In a very similar match, Dingley did what they had to do to get the points over Cheltenham, but it wasn’t pretty. A 16 point half time margin blew out to 50 by the final siren, the Dingoes holding onto their position of second on the ladder.

A six goal to none final quarter by Dingley against Cheltenham was the perfect capping to a previously close fought match. The Rosellas were impressive, but the Dingoes had too much run in the legs, winning it by 56 points.

Cerberus were far too strong for Sandown, winning by an impressive 77 points. Matthew McCormick kicked all of the Cobras’ four goals, but Cerberus had nine individual goal-kickers, and are now a game clear in fourth.

Hallam took care of South Yarra to the tune of 56 points, the Hawks restricting the Lions to three goals for the entire game. Matthew Jester and Luke Bowen were excellent for the Hawks in this crucial victory.

Dandenong picked up the unwanted title for ‘first scoreless team’, recording duck eggs against Mount Waverley. The Redlegs just couldn’t get on the scoreboard, meanwhile the Mountain Lions kicked 22 goals and won it by an even 150 points.

Endeavour Hills were matching it with the undefeated Skye, trailing by just five points at three quarter time. Yet, as they’ve done all year, the Bombers ran away with it in the last, kicking four goals to none and winning by 30 points, and remaining unbeaten.

There was a big 115 point victory by Black Rock of the Eagles of Doveton, and perhaps it would’ve been more if the Jets didn’t kick more behinds than goals. Daniel Golding was exceptional, with seven goals and best on ground honours.

Clayton have kept their finals hopes alive after an 81 point win over Moorabbin. The Clays were in control from start to finish and will hope they can carry on this form in the second half of the year. Dean Green battled hard all game for Moorabbin despite the scoreboard.