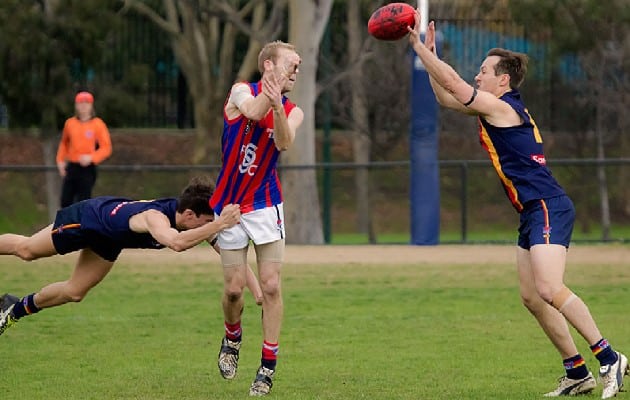 Bentleigh and East Malvern played out an absolute thriller at Bentleigh Reserve with the home side getting up by less than a kick. Superb performances from Tremaine Tohiariki and Matty Carroll helped the Panthers set up a handy 27-point buffer at the final change. But with their backs to the wall the Demons stormed home booting five unanswered goals in the last quarter to win by just three points. Matt Troutbeck was easily best afield with a dominant five-goal display while Sam McGarry was also a solid contributor.

Over at Ross Street Reserve St Pauls defeated Heatherton by 37 points. This was a margin that should have been a lot greater given the Dogs registered 17 more scoring shots than their opponents but the Tunners worked hard to keep them to just one goal after halftime. Cameron Moon was the standout for Heatherton and although Peter Mercoulia won plenty of the footy for St Pauls, it was the mercurial Luke James that proved the difference, booting five of the Doggies’ eight goals.

Cheltenham consolidated its spot in the top four with a comfortable win over St Kilda City. With Ben Moloney running rampant the Rosellas extended its advantage at every change before cruising home to win by 45 points. Pat Nicholls also stood out for the winners with four goals on what was a difficult day for the big fellas while Shane Reid was among the Saints’ best.

Dingley extended its winning streak with a comprehensive 49-point belting of Chelsea Heights at Souter Oval. The Dingoes defence led by Andrew Frost kept the Heighters to just one goal for the first three quarters, despite the tireless efforts of Chris Moloney. Marcus Freeman and Jackson Peet ran rampant in the middle and finished with a combined six majors for Dingley.

The final game saw East Brighton claim the four points with a 35-point win over Clayton at Meade Reserve. Just one solitary behind separated the two sides at quarter time, but it was one-way traffic from then on as the Vampires held the Clays to just two behinds for the rest of the game. Skipper Ben Douthie was the star with four goals to get his side home. Alex Johnson was one of the few shining lights for Clayton.

Round 8 provided a few surprise results that are bound to shake up the ladder at the end of the season.

They have been threatening to do it for the last month but Doveton finally got their upset win when they defeated Murrumbeena by 27 points. The Eagles kicked 5 goals in the first quarter which set them up for the win. Matt O’Callaghan and Matt Fristad doing some damage in the midfield while Peter Dye continued his good form in front of goal kicking 6.

Highett moved into the top 3 with a tight victory against Oakleigh Districts at Princess Highway Reserve. Neither team were able to pull away from the other, despite several lead changes, and the Dogs were able to hold on for the victory despite a poor final quarter. Oakleigh were unable to capitalise on their superb defensive effort throughout the game. Pat Singh and Aaron Harris were superb through the midfield for Highett.

Hampton got their season back on track after a 66 point victory against Moorabbin. The Hammers have been disappointing for the last month but will gain some confidence from this dominating display. Hampton dominated through the midfield with the likes of young gun Josh Burbidge and Todd Crane playing well. Justin Isaacs also had his best game of the season kicking 4 goals.

Springvale moved back into the top 5 after a 6 goal second half led them to victory against Caulfield on Saturday. The Bears led at halftime but were restricted to just 3 points for the quarter. Springvale upped their intensity after halftime and it showed, their pressure efforts helping them get over the line. Leighton Ross was among the best on the ground kicking 3 goals.

The game we were all waiting for, the top of the table clash turned into a game of who had the best defence. Mordialloc defeated Skye by 12 points but in a game where only 6 goals were kicked for the entire match it’s fair to say a lot of this game was played between the arcs. But take nothing away from Mordialloc, they built up a 13 point lead at halftime and were able to hold on for the remainder of the game and move back onto top spot on the ladder. Nick Corda was best afield for the Bloods.

Sandown triumphed by four points against a wayward Black Rock at Edinburgh Reserve. The Jets managed six goals for the day, but finished with 17 behinds. Clint Sheedy had another good day, with four goals for Sandown, and the Cobras’ best was Anthony La Rocca. The Jets are clinging to third place on the ladder, but the Cobras are only behind them on percentage.

At Barry Simon Reserve, Dandenong raced to a 25-point lead at the long break against Endeavour Hills. By three quarter time the Redlegs were still in command with a 21-point margin, but the prospect of a seventh straight loss stirred the Falcons into action. They slammed on seven goals in the last term, getting up by 14 points. Byron Hoe was the winners’ best. Allan McPherson booted five goals, and Shane Peake four for the relieved Falcons.

South Yarra was unable to match the efforts of Ashwood in the last quarter. The Magpies managed five goals to two, winning by four points. It was the first time since round 3 that the Magpies were able to sing their song. Ten players contributed to Ashwood’s total of 16 goals. Jacob Barker managed four of these. The best player for the Magpies was Brett Figas.

Hallam was never in the match against Carrum Patterson Lakes. The Lions cruised to a 76-point win. Joel Dalton kicked five goals for the winners and Justin Olaman four. Unfortunately, the Hawks could only manage four goals for the game. James Dent was named best for the Lions.

Lyndale was at home, but never threatened Mount Waverley. The Mountain Lions remain unbeaten, and on this occasion won by seven goals, more than doubling the Pumas’ score. Star full forward James Gough was held to three goals for the winners, with Lachlan Morrey also kicking three. Taryn Dawson was the Mountain Lions’ best.

After a week off the players returned rested and refreshed as the home ground factor played a big part in the round 8 results.

Bentleigh did it again, beating Hampton by 91 points. A seven goal last quarter to the Dees blew out the score line, and they remain unbeaten on top of the ladder.

The closest match of the round took place between Carrum Patterson Lakes and Cheltenham. The Rosellas led by seven points at the final change after leading for most of the match, however CPL snatched the win by six points. Jordan Watters and Andrew McCormack were key to the victory, which leaves CPL just outside the five.

Skye had no such troubles dismantling St Pauls, despite many predicting the game to be a lot closer. Tyson Ross and Ryan McConville both kicked bags as the Bombers stormed to an 84 point victory.

Clayton delivered a workman-like performance to get the points against Highett. Although the Clays only had two goals at half-time, a ten goal to five second half was enough to beat the winless Doggies. The Clays are still searching for the bigger wins they need to catch Bentleigh and Dingley on percentage.

The scores were tied at halftime in the encounter between Dingley and Chelsea Heights, yet it wouldn’t stay that way. As they’ve done all season, the Dingoes were too strong in the second half, and won by 65 points, thanks to seven last quarter goals.

The two unbeaten teams in Thirds continued their spectacular form, both winning again.
It was Skye who had a big 98 point win over Cheltenham, however it should have been more: the Bombers were very inaccurate, kicking 14 goals and 26 behinds.

Conversely, Mount Waverley were pushed all the way by an impressive Moorabbin performance. Through Jack Begbie the Roos were in it the whole way, however the Mountain Lions found a way to win, by nine points.

Despite being level at quarter time, Clayton eased to a comfortable win over Doveton. The Eagles couldn’t keep up with the Clays, succumbing by 59 points. Luke Romanelli had a match to remember, with three goals.

Dingley flexed their muscle with a strong 96 point victory over Hallam. The Dingoes only conceded one goal for the entire match, ensuring the Hawks were never in the contest. Peter Rizzi kicked five for the home side.

Sandown have made a habit of being in close matches this year, and their match up with Black Rock was no different. There was a clear scoring end, with 12 of the match’s 15 goals coming from the end the Cobras were kicking to in the last quarter. This worked perfectly for them, as they overcame a nine point deficit at the last break to win by six points.

Big wins for Cerberus have become a regular occurrence too, this time against South Yarra. The Lions were held goalless after quarter time, while Cerberus piled on 14 in that time. Aaron Pawley kicked a handful in a good individual performance.

Endeavour Hills had no problems pushing aside Dandenong, running in a 73 point triumph. Nathan Proctor kicked six goals, the Redlegs’ defence had no answers for his excellent display.