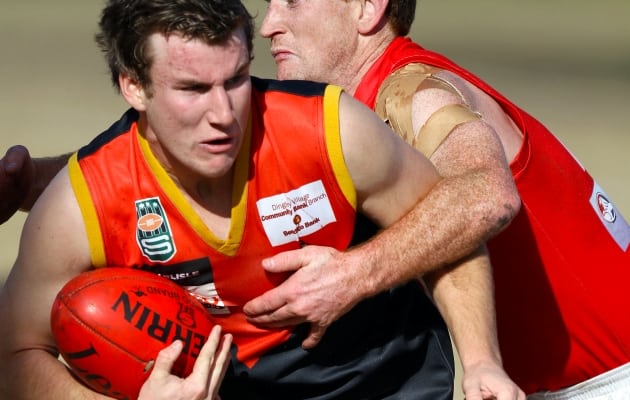 It’s here! The finals are upon us as the race for the 2013 premiership begins. The intensity will lift as each team has a shot at becoming the premiers.

The first match-up of the 2013 finals series features two teams who have had very different seasons. East Brighton had a slow start to the season losing 3 of their first 6 games but since then they haven’t lost. Their winning streak has reached 12 games and they are clearly the in-form team of the SFL. Dingley on the other hand had a hot start to the season but a few late season losses saw them drop to 3rd on the ladder. Still, this is their best finish in Division 1 and this young team has what it takes to challenge for the premiership.

Both sides feature highly talented midfields who have the ability to go forward and kick goals. Dean Williamson (EB) and Luke Bartholomew (D) are two such players and are a key match-up for this game. But the X-factor for each club remains on the half forward flank. Dan Reid (EB) and Jackson Peet (D) are two players who have the ability to go under the radar and can be very damaging. This is going to be close but it’s hard to look past the Vampires.

Don’t let each teams' win/loss record fool you. This will be a close game. These two teams have fought close battles in the finals countless times over the last few seasons and this game will be no different. Luke Manders will be a key factor in this game as he has kicked 6 goals in the two meetings these teams have had and is coming off a career best 63 goals, placing him 3rd in the Division 1 goal kicking tally. The Saints don’t have a bonafide key forward they can rely on but their forward flankers are solid contributors week in and week out and will be looked upon again to provide the majority of the scoring.

As it always is with these two teams, the midfield battle will be highly important with the likes of Jayden Attard, Brad Gilder and Travis Johnstone going head to head with Gary Johnstone, Max Bruin and Jon Stinear. Each team’s midfield and their ability to drift forward and kick goals will be the determining factor in this game and will provide for a highly entertaining contest, but Chelsea Heights look the goods for this one.

Who wins the opportunity to match it with Bentleigh in the Second Semi next week? Oakleigh won both the encounters with Mordialloc during the season proper. They also had an emphatic win last week over Moorabbin, after a couple of so-so performances prior to that. Mordialloc weren’t quite as impressive in disposing of South Yarra, but they still managed a 10 goal victory. I think Oakleigh District will reign here and will get to take on Bentleigh next week, seeing Mordialloc taking on Springvale Districts next week in the 1st Semi if my tipping is any good this week.

With the home and away season done and dusted we can now look forward to four weeks of what is sure to be a tremendous finals series!

This Saturday is the highly-anticipated Qualifying Final between Dandenong and Carrum Patterson Lakes. This will be a terrific contest between two very evenly matched sides; in fact a cumulative total of just 15 points has separated both sides after their two previous meetings in 2013, with Dandenong getting home on both occasions. The Redlegs have been much-improved this year – its 13 wins are as many as it won in 2011 and 2012 combined. Carrum Patterson Lakes, on the other hand, has been the Cinderella story of Division 3 with its maiden finals appearance in its debut season in the SFL. This will be another close finish, but I reckon it will be Dandenong playing Doveton next week for a spot in the decider.

Mount Waverley and Ashwood face off in a cut-throat Elimination Final on Sunday. Unfortunately, neither of these sides are bringing particularly good form into this all-important clash. The Mountain Lions were flying early in the season, winning seven consecutive games before a poor second half of the year cost it the double chance. Ashwood are also struggling, having lost its past three matches. The Magpies eliminated the Mountain Lions in this same fixture last season, but I reckon Mount Waverley has been the better of these two sides this season and will reverse the result in 2013.

All Division 3 finals matches are played at Jack Barker Oval.

Congratulations to the sides playing finals footy in 2013 and to those that missed out I wish you the best of luck for next season.

Skye and Murrumbeena kick off the 2013 finals series on Saturday with the Qualifying Final at Springvale Reserve. Beena has been fortunate enough to be gifted the bye a week before finals, so that will help them recharge their batteries. However, Springvale is a huge ground, which is more likely to suit the Bombers. I am expecting a fierce contest here between two very good sides, but I think Skye will be too strong.

On Sunday is the cut-throat Elimination Final between Dingley and St Pauls, also at Springvale. Not much has separated these two sides during the home and away season and I’m tipping another close finish here. The Dingoes got the points in their previous two meetings and unfortunately for St Pauls, I think they will make it three wins from three starts with another victory here.

Finally, I just want to thank the clubs for a terrific season of Under 19s footy. Congratulations to the teams competing in this year’s finals series and for those that missed out I wish you the very best of luck next season.