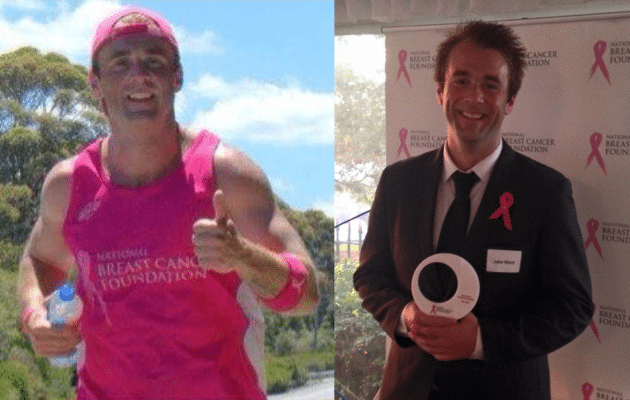 Tweet
Lyndhurst Lightning’s inaugural captain, Jake Ward, is now just days away from setting off on the journey of a lifetime.

As reported back in May, the cancer crusader will embark on a gruelling month-long, 1500km run from the Gold Coast to his house in Cranbourne starting on November 1, all in the hope of raising valuable funds for the National Breast Cancer Foundation.

Ward flies up to Queensland on Monday, and rather than enjoying the festivities of Melbourne Cup Day like the overwhelming majority of Melburnians, he will instead be commencing his epic run home from the Sunshine State.

And Ward says he is excited, rather than nervous, about the monumental challenge that awaits him.

“(I feel) like a kid before Christmas. I can’t wait,” he revealed.

“(I’ve) been talking about for ever so can’t wait to get started.”

Ward has always had a burning desire to help others, and currently works as a carer for people with intellectual disabilities, a personal trainer and a case manager for a work-for-the-dole program. He is also a devoted supporter of the work of the NBCF, having lost two relatives to breast cancer.

He is also no stranger to long-distance charity running. Ward has previously completed a torturous 1000km trek on foot from Sydney to Melbourne in September 2014, as well as blazing a 110km trail around Melbourne’s south eastern suburbs in December 2013 to raise money for NBCF.

However, this year’s challenge is some 500km longer than his previous endeavour, and consequently will require much greater effort, but Ward says he is up for the challenge.

“I already know what these big runs entail so (I’m) just going through it, just making sure I’m ready in all areas, mentally and physically,” Ward said.

“I feel really good now, just trying to get through these next five days.”

Ward has done a mountain of work over the last few months to physically prepare his body for the rigours of the run. In addition to playing football and basketball, his exercise regime has included both short and long distance running, bike riding and weights sessions, with plenty of variation to maintain interest and motivation.

But with all of the intense training now behind him, Ward is now in recovery mode, with stretching and pool work helping ensure he is niggle-free and in the best possible condition to tackle the epic journey.

While fine-tuning your fitness may be the most obvious way to prepare for such a punishing physical endeavour, having strong mental fortitude is just as important. Ward says he has been drawing on the experience of his previous runs, as well as the memory of those lost to the insidious disease to steel his mental resolve in readiness for the long road ahead.

“Mentally, it’s just a matter of revisiting what happened last time. Because it’s a longer distance, you know, what happens if the body breaks down early? Can I push through like I did last time?” Ward explained.

“I’ve got a really good support crew and I’m pretty perspective kind of guy, so even if I am getting sore, you know, I’m getting messages from all over the world telling me about the loved ones they’ve lost and things like that and I can only look to my family who have lost a couple to breast cancer (which helps me through it).”

Ward credits his fantastic support team for their assistance to date in sorting out the logistical components of the run, which has allowed him to focus on his own personal preparation. He is also deeply appreciative of the many generous backers, including the Lyndhurst Football Netball Club, that have got on board to support him with the things he needs for the trip.

"The footy club have been great. We had (a NBCF) fundraiser during the year... and lately, our senior assistant coach, Les Wooderson, tried to pass the hat around and splurged a bit of cash himself to buy me three new pairs of runners,” Ward said.

“I had a sponsor, Hoka One, they donated a couple of pairs, and my girlfriend bought me a pair, which was nice of her.

“Andrew’s Autos in Pakenham have donated a car for me to borrow, and he’s actually driving up to Queensland this Friday to hand (the car) over to my driver.

“He organised a car show/BBQ at his work, which generated a bit of money and he also donated $5000 out of his own pocket. He’s an absolute superstar.”

A few of Ward’s mates have since decorated the car in stickers to promote the fundraising mission, including an image of Ward on the back door, which he has enjoyed getting around town in.

“Mates of mine work down in Progress Signs in Mornington and that was their donation, all the stickers on the car, which has been a bit fun driving around to be honest!” Ward said.

"I’m real happy with it, and everyone seems to like it and I get a few toots as I’m driving around, which is good.”

While much of the logistical support has already been taken care of, there remains one thing that he believes he needs more than anything to help him through the lonely days pounding the pavement.

“What I probably need is someone else to do the run (alongside me). That would probably be nice!” Ward said.

“I’ve got one mate he wants to come up and do a day or two. You get people saying they’ll come up, but just like the last run, it’s very difficult to (entice people to) come out in rural Victoria or rural New South Wales and spend the day.”

Donations can be made by visiting Ward’s NBCF Everyday Hero page here: nbcfsports.everydayhero.com/au/jakewardgc

Ward's support car, donated by Andrew's Autos, has been given a NBCF-themed makeover by his mates at Progress Signs.[/caption]