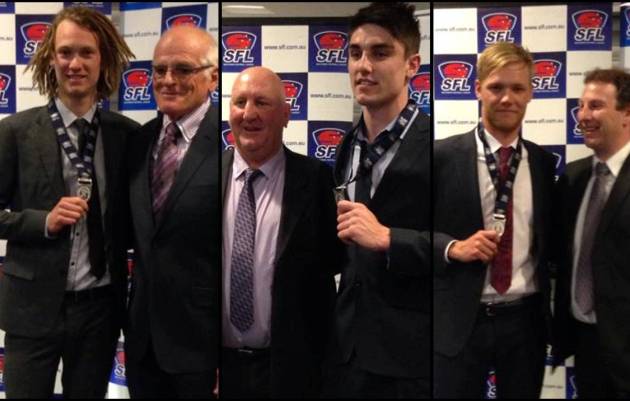 Tweet
In front of the largest crowd ever assembled for the Annual SFL Awards Dinner, Dingley Football Club's Lucas Walmsley was the runaway winner of the Ellis Medal for the Best and Fairest player in Division 1.

Taking out the award by seven votes (on 25 votes in total), Walmsley finished ahead of runner-up Andrew Gilbert (St Pauls - 18 votes), whilst Bentleigh's Scott Lawry and East Malvern's Tremaine Tohiariki finished one vote further back on 17.

In the Bennett Medal, for the Best and Fairest Player in Division 2, Skye's Daniel McEwan capped off a stellar season with a two vote victory over Oakleigh District's Paul Fermanis.

In the Flack Medal, for the Best and Fairest Player in Division 3, Mount Waverley's Ben Stacey came from five votes behind (and sitting equal fourth) with two rounds to go to pip team mate James Gough and Black Rock's Jay Williams by one vote.

In the Sparrow Medal, for the Best and Fairest Player in the Under 19s, Dingley's Luke Heywood strung seven consecutive best-on-ground performances in a row to close out the home and away season and see him win the Medal by eight votes to Clayton's Jack Day, with Bentleigh's Chris Yenofkian one vote further back.

In the Netball Best and Fairests, Division 1 was taken out by Bentleigh's Michaela Russo, Division 2 by St Kilda City's Jacqueline Baker, Division 3 by Lyndale's Jaimi Paton, and Division 4 by Bentleigh's Christie Roberts.

Other notable winners on the night were:

All voting chart tallies can be viewed via the links below: