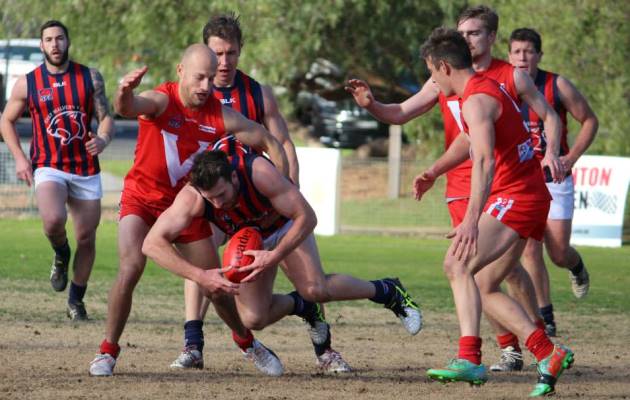 Vampires Prevail in the Battle of the Easts

Tweet
East Brighton pulled away in the final term of a tight struggle against East Malvern to triumph by 22 points at Hurlingham Park.

Barely a kick separated the sides for three quarters in what East coach Ben Murphy described as “a tight game that was a bit messy’’.

“There was a fair bit on the line for both teams and plenty of pressure,” he said after the game.

“We were a little bit off early and started to click in that last quarter.

“To be fair, it was probably due to their pressure. We were trying tot execute our game plan all day, but it was only in the last quarter that we did it successfully.”

Damien Rayson put in one of his best games for the season for the Vampires.

“He came to the fore when we needed him,” said Murphy.

Phil Smith was also instrumental in East Brighton’s victory with five goals, while Steve Murphy was good all day. The ruck duel between Hamish Dahl and the Panthers’ Matt Terech was a highlight, with honours about even. Ben Douthie was named among the Vampires’ best at centre-half-back, yet his opponent, Michael Cooke was named East Malvern’s best.

“You don’t see that too often, but both players deserved it,” observed Murphy.

The consistent Daniel Reid and hard-running Dave De Luca also impressed for the winners, while Jessie Finnen, Lewis Fitzgerald and Paul de Koeyer were among the Panthers’ better players.

Murphy believes the stage is set for an intriguing finals series.

“I think the top five are more even than many may think.” he said.

To listen to the SFNL Radio team's call of the big game CLICK HERE.

As always the Sunday Football Netball Show reviewed all the weekend's action. Listen to their show HERE.