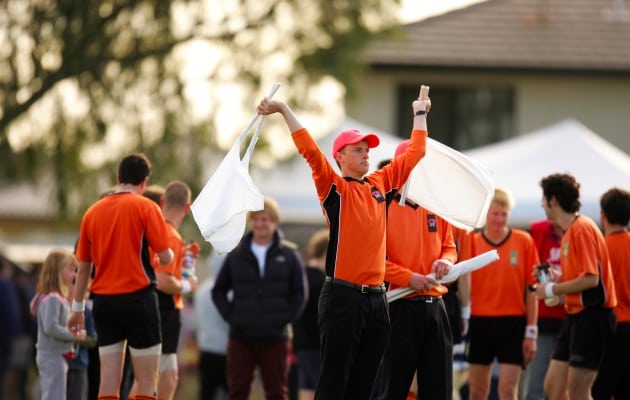 2014 has been a successful year for football umpiring in the Southern Football League. On Wednesday night almost 200 people celebrated the season at the SFL Umpiring Grand Finals Appointments and Awards night.

Director of Umpiring for the Southern Football League, Peter Mair, thanked all stakeholders across the league who assisted with delivery of the umpiring program, including the SFL Board and Administration, the Umpiring Department coaching and administration team, the SFL Umpires Association, all Umpires, the SFL Coaches Association, Presidents, Coaches, Captains and Players.

A number of Awards were presented during the evening.

Andrew Scott was awarded the Most Dedicated Umpire, for excellence in preparation and training.

Games milestones were recognised, together with two Umpires being awarded life membership of the SFL Umpires Association.

Carmel and Nigel Thompson (Canteen) and Kevin Mitchell (Uniform Shop) were recognised for their volunteer efforts, by receiving a community umpiring recognition award provided by the AFL.

The evening concluded with the announcement of the 2014 Grand Final Umpires across all grades.

The SFL Umpiring Department has announced the Umpires for this Sunday’s Division One Grand Final.

Annie will umpire her first Division One Grand Final this weekend, after umpiring the Division Three Grand Final last year. Annie is also a member of the AFL Victoria Female Umpiring Academy and combines her SFL duties by officiating in the Victorian Women’s Football League, where she recently won the prestigious Golden Whistle Award.

Joining Annie in the middle on Sunday are Sam Bridges and Andrew Scott. Both Sam and Andrew are lining up for their second Division One Grand Final after umpiring the 2013 decider. Sam won the SFL Umpiring Golden Whistle this year, while Andrew was awarded the most dedicated umpire for 2014 and has been nominated to trial with VFL Umpiring for season 2015.

The Boundary Umpires are Ben Priggen, Fraser Somerville and Tim Fierenzi. Ben lines up for his third Division One Grand Final in a row, while Fraser and Tim are officiating in their first.

In the Goal’s, experienced Umpire Dan Bomford has been selected to umpire in his sixth Division One Grand Final, while Nick Bridges will umpire his first.

All Umpires in the Division One Grand Final are accredited to Level 2, as part of the National Umpires Accreditation Scheme, which is the highest standard in community football.

Congratulations to all Grand Final Umpires in all Divisions, across all grades.