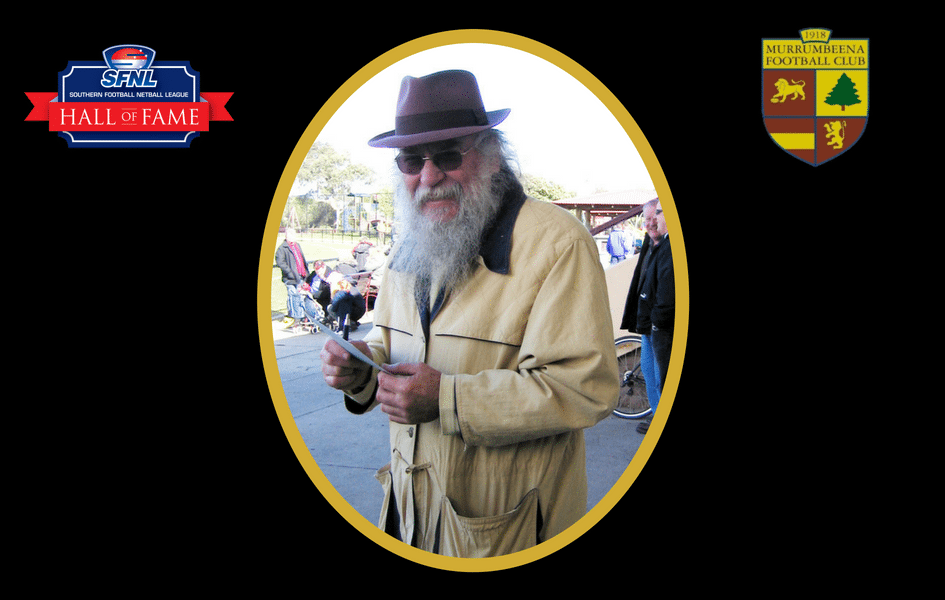 "He'd huff and puff his chest out going for the ball and a lot of blokes would get out of his way,” recalls friend and fellow Murrumbeena identity Steve Barnes.

But that outward appearance in the heat of battle didn’t define Gould as a person.

Gould’s induction into the SFNL Hall of Fame pays tribute to a man widely admired by those who came to know him.

Although he passed away too soon in 2014, aged in his early sixties, his contribution to Murrumbeena Football Netball Club and the SFNL was monumental.

In reserves and seniors, he played 354 games for the club.

Many of those games were at reserve level, including his appearance in the 1975 Beena premiership side.

“Ross wasn’t an A grade footballer. He was an A grade human being,” Barnes says.

If not the most naturally gifted player, Gould brought other attributes to the field.

That was never more apparent than in Murrumbeena’s hour of need in 1977.

The Barnes’ coached senior side was due to play in the grand final, but its regular ruckman was taken ill and withdrew from the side.

Gould was accustomed to playing as a backman, but his size led to him being called into the side and into the vacant ruck role.

“Ross played out of his skin against Ashburton 41 years ago, played the game of his life,” Barnes declares.

Gould’s honours as a player include twice being chosen as the most consistent reserves player of the season.

He was also voted Murrumbeena’s best player in the 1986 reserves finals series.

Gould was captain coach of Beena’s 1988 reserves grand final side and he won the reserves best and fairest in 1990.

His onfield contribution went beyond pulling on the Murrumbeena jumper.

He umpired over 100 reserves games for the club.

"He used to umpire with a cap on, still a colourful character and very assertive on the footy field," says Furlong.

Furlong makes it clear that if a free kick was there, Gould would pay it whether or not a Murrumbeena player or rival was the beneficiary.

Off the field, Gould filled administrative positions at the club.

His approach was summed up in the book released to celebrate the club’s 2018 centenary.

"It was a position that he carried out with distinction characterised by fair mindedness and a penchant for detail and accuracy."

Whilst that description related to Gould’s time as secretary, in truth it captures the essence of his approach to people and to tasks in general.

His organised and meticulous record keeping undoubtedly helped ensure the smooth running of the club.

In addition to his years as secretary, Gould also held the positions of club president and treasurer.

But it was his manner with people that endeared him to so many.

"I think he just had that instant respect which comes from a culture of the way he used to go about treating people, and I've never known him to not treat anyone with respect," Furlong says.

Gould had the ability to put people at ease and make them feel important.

This helps explain his success as Student Welfare Coordinator at Melbourne High School.

"At his school he was so respected because he was a great counsellor and he would listen to people and he would act on what they'd say," Gould’s friend Paul Callery says.

Callery attended university with Gould prior to a successful career as a rover, representing Melbourne and St Kilda.

Speaking to Callery it is clear Gould always had a strong work ethic, without losing sight of the need to enjoy life.

"Ross was a terrific academic. He didn't leave any stone unturned. He'd have good fun, but when he had to apply himself he really could."

After university, Gould continued to apply himself as a teacher of physical education, English and history.

He used his aptitude for history at Murrumbeena, tracing the club back to its inception and creating a pictorial display of the club’s past, which can be viewed in Murrumbeena’s common room.

Gould is also credited with the research needed for the club’s detailed honour boards.

Despite his extraordinary passion for Murrumbeena, his contributions went beyond club level.

"Even though he was a Murrumbeena man he was a football man first and foremost," Furlong says.

Gould’s organisational skills and energy came in just as handy at league level as they did at his club.

"When I happened to be asked to coach the SFL interleague side, Ross just turned around and said, 'You've got your team manager' and I couldn't have thought of anyone better than Ross Gould. It left me nothing to worry about other than trying to get it right on the field with our boys," Barnes explains.

Having twice been named Best Club Person, the trophy for that award was renamed the G.R. Gould Shield in his honour.

As a member of the Hall of Fame and long-term contributor to the SFNL, Barnes sums up his thoughts on Gould.

"In my journey in football mate, Ross Gould is a standout. Ross is simply the best and the most humble man and sadly he was claimed prematurely, but a beautiful human being who just got it."

Callery also pays tribute to Gould as a person.

"I just know that he was an unbelievably decent person. He was a thorough gentleman when it came to other people. It was a two-way communication. It was never all about Ross.”

Ross Gould is a welcome addition to the SFNL Hall of Fame.