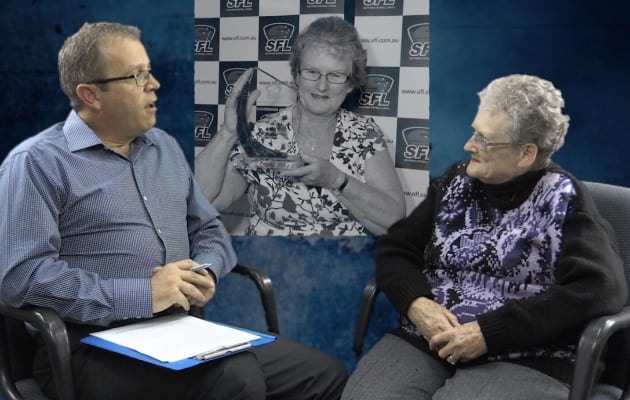 
Don't miss your chance to see Margaret and the five other worthy inductees honoured at the 2016 SFNL Hall of Fame. CLICK HERE for further details on the event and to book your place.

There wouldn’t be many people that have contributed more to their local community sporting organisation than Margaret Torpy has to the Moorabbin Kangaroos Football Club.

Since 1988, Torpy has gone above and beyond for the club in myriad off-field roles, and is almost single-handed responsible for keeping the club in existence.

Torpy’s unwavering love for the Kangaroos will see her become the first woman inducted into the Southern Football Netball League Hall of Fame.

It is an honour that is richly deserved for the much-loved Moorabbin figure and one Torpy herself is extremely proud of.

Torpy’s life in football began back in 1975 when her sons Greg and Anthony began their junior football careers. She then followed Greg to Moorabbin West, as the Kangaroos were then known, in 1987 and has remained there ever since. Anthony joined the Kangaroos soon after.

Not one to stand by idly, Torpy took on the role of Assistant Secretary of the club in 1988, her second season at Widdop Crescent. In the years that followed she has held positions as club Secretary, Treasurer and, at times, both at once, as well as serving on the club’s committee. Torpy remains the club’s Treasurer in 2016.

She is not afraid to roll her sleeves up on match day either, helping out in the canteen and as umpire escort, as well as preparing the players’ jumpers each week.

But her biggest contribution to the Kangaroos came when she twice saved the club from the brink of implosion.

In 2009 the club was on its knees. The entire committee had stepped down, leaving Torpy as the only remaining office bearer. She was instrumental in the formation of a new committee that not only resurrected the stricken club during its darkest hour, but allowed it to prosper, culminating in the 2012 Division 3 Senior premiership.

A similarly dire situation again occurred in September of last year with another mass exodus of committee members. Once again Torpy was the saviour, helping appoint a new President and a new committee to help the club off the canvas and drive it forward.

Many would have been tempted to throw in the towel in the face of such adversity, but Torpy said her love for the club fuelled her tireless efforts to keep it afloat.

“We were on the brink of extinction and I would have been heartbroken if we had have folded,” Torpy revealed.

“I was determined that the club wasn’t going to fold and I was going to do everything within my power… to make sure that Moorabbin went forward."

Remarkably, Margaret has been there for all three senior premierships in the club's history - 1993, 2005 and 2012. She rates these flags as the highlights of her time at Widdop Crescent and each one is special to her for different reasons.

“Well 1993 was a highlight because the seniors and reserves both won (their first) premierships, so that was a really great thrill,” Torpy recalled.

Torpy has over the years been recognised with many awards and accolades, including a prestigious AFL Merit Award, a SFNL Chairman’s Award and Life Membership of the Moorabbin Kangaroos. She was also a finalist in last year’s inaugural SFNL Women’s Achievement Award.

But her induction in the SFNL Hall of Fame is the ultimate reward for decades’ of devotion to her beloved Kangaroos.