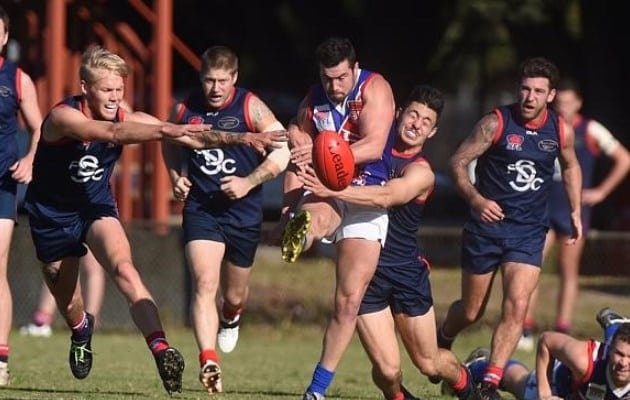 The King of Keysborough

East Malvern notched its fifth victory of the year, getting home by 10 points over a fast-finishing Mordialloc at Dunlop Reserve. The Panthers took control of the match with a five-goal second quarter and by the final change had extended their advantage to 31 points. But with Sam Nichols leading the charge the Bloods slammed home four majors in the last quarter to give the home side a scare. Michael Cooke and Ryan Fitzgerald were the standouts for East Malvern.

East Brighton has jumped to second on the ladder, leapfrogging the Panthers with a percentage-boosting 88-point victory over Chelsea Heights at Hurlingham Park. The Heighters were impressive early, and with Jordy Peryman again in the thick of the action and they were surprise leaders heading into the quarter time huddle. However, the Vampires proved too strong from then on, conceding just one more goal for the game as they romped home. Big Hamish Dahl was unstoppable in the ruck while Toby Mahoney single-handedly outscored the visitors with a bag of five majors.

St Pauls, meanwhile, got its season back on track after defeating Cheltenham by 25 points at the Kennel. The Dogs led at every change in what was a tough, low-scoring arm-wrestle, withstanding every challenge the Rosellas threw at them. Rhys Peet and Ken Hall were among the standouts for the winners, while Dan Vaughan was Cheltenham’s best for the second week running. The Dogs’ win puts them just a game out of the five.

Over at Meade Reserve, Clayton bounced back from the previous week’s thrashing and climbed into the top five with a comfortable 47-point win over St Kilda City. The Clays were never really challenged, piling on 11 goals before the long break to open up a match-winning advantage before coasting home in the second half. Justin Mitrevski starred for the winners while Stewart Scanlon was a focal point in attack with five majors. City ruckman Steve Aravanitis (three goals) wound back the clock with a vintage display.

Dingley consolidated its position atop the ladder with a comprehensive 68-point demolition of Bentleigh at Bentleigh Reserve. The Dingoes were always in control as gun on-ballers Luke Bartholomew and Jackson Peet ran rampant through the middle while also combining for seven goals. Young Matt Hogan was the standout for the Demons.

Several teams made moves up the ladder in round six but Keysborough are still undefeated after a big round six win.

Keysborough got their sixth win in a row after a dominating victory against Springvale Districts. The borough were well in control throughout the game with a seven goal second quarter setting up the win. Springvale were good in patches throughout the game but were simply outclassed by a better opponent as Keysborough piled on eight more goals in the second half to win by 53 points. Tyson King was best on ground with eight goals to bring his tally up to 32 for the season.

Caulfield got their revenge on Skye after their defeat at the hands of the Bombers in the finals last season, winning their encounter at Carrum Downs Rec reserve by seven points. Playing without gun forwards Ryan McConville and Aaron Pacey, Skye had good contributors in Ben Evans and Travis Kitchin; but it wouldn’t be enough as they young Bears kicked five goals in each half to hold on for the victory. Bears full forward Adam Connell had a promising game since returning from injury, kicking three goals.

Oakleigh have kept their good form going by defeating Doveton by 53 points at Princess Highway Reserve. Oakleigh displayed their firepower up forward with a nine goal to three second half to set up the win, after a somewhat lacklustre first half effort. The districts were able to spread the goal scoring load around with nine individual goal kickers, led by David Velardo who kicked four. Luke Casey and Brody Hodic were among the best for the Districts.

Hampton has recorded its third win of the season following a comfortable 29 point win over Heatherton. The Tonners were in good form early as they got the jump on Hampton in the first half to take a five point lead into the main break. But the Hampton put the Hammer down in the third quarter kicking seven unanswered goals to take 35 point lead going into the last. Despite a comeback attempt, Hampton held on for the win. Joel Hanlon was outstanding in front of goal for Hampton, kicking seven. -Listen to the Southern FM boys call HERE

Murrumbeena have shown how much they have improved this season with a tough win against Highett. The Beena have evolved into a defensive outfit this season but were unable to clamp down on Highett early as they trailed by a goal at half time. But the screws were tightened in the second half and Murrumbeena were able to draw in front in the final quarter to record a five point win, which could have been more if it wasn’t for inaccurate kicking. Cory Hargrave was the best for the Beena.

Veteran Kelly Spratt led the way for Black Rock as the Jets’ best player in a commanding 58-point victory over Sandown. It is doubtful that another visit from Brendan Fevola could have helped the Cobras, as the winning margin would have been even larger but for a woeful 3 goals 12 behinds from the Jets in the last quarter. Nonetheless, Tom Dewar finished with five majors for the day for the winning side.

Moorabbin settled in well at Roy Dore Reserve booting three goals to none in the first quarter against Carrum Patterson Lakes. The home side did not kick a major until after half time. Despite the fact that Justin Olaman eventually managed four goals for the Lions, the Kangaroos continued to bound along, finishing 37 points ahead. It was a strong team-effort, with Trent Davey the only multiple goal scorer for Moorabbin with two. Michael Kinsella was the undefeated Kangaroos’ best player.

Despite a spirited effort in the second half, the visiting Lyndale crashed to a
31-point defeat in what seemed a winnable game against Endeavour Hills. The Falcons raced to a 49-point advantage at the long break. Both Daniel Morrison and Shane Peake had a fine day in front of the big sticks, evenly splitting ten of Endeavour Hills’ goals, and Jarryd Burke was afforded the honour of being named the Falcons’ best player.

It is heartening to report on a determined showing from the Southern Dragons at Mayfield Park, standing up to Mount Waverley and trailing by just 14 points at the long break. With Luke Galle starring with nine goals, the Mountain Lions prevailed by 46 points, but the Dragons gained respect, averting a likely thrashing.

Playing at home, Ashwood entered the final stanza holding a 27-point advantage against South Yarra. At that time, the Lions had only scored that number of points in three quarters, but they are impressing with their effort this year and gave the Magpies a real scare. Ashwood scraped home by a goal, with Frank Martinicchio again earning a mention with four goals for the day and Jeremy Nelson getting the nod as the team’s best player.

The excitement of playing at home under lights did the trick for Hallam as the team took charge from the outset, holding Dandenong to a solitary first-half goal, and building a 28-point lead by the long break. The sides added a couple of majors each for the rest of the match. The Hawks celebrated their first win for the season, with the final margin being 32 points.