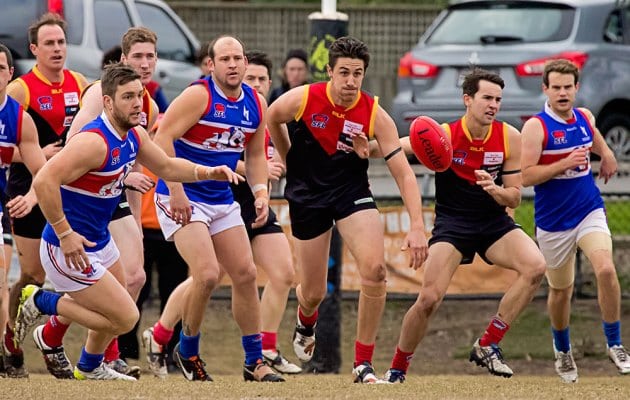 Tweet
St Paul’s cemented its place in this year’s finals series when it upset top side Dingley by eight points in a battle of the defences at McKinnon Oval.

The Doggies’ win will undoubtedly send a few tremors through the sides above them as they motor home with a full head of steam.

“We’ve been good in the past few weeks,” said St Pauls coach Mark Dessent after the game.

“The younger players are now settling in and feeling part of it all.

“We’re starting to gel after being a bit slow out of the blocks at the start of the season.”

The Doggies have now won eight of their last nine games and the scalp of Dingley is no small achievement.

“I think we beat them at ground level,” ventured Dessent.

“They’re a big, strong side and like to run. We had to focus on applying pressure and stopping their run.”

The Doggies did just that, with their blend of experience and emerging talent proving a winning recipe.

Stalwart Brad Gilder was superb through the middle, while young James Sziller, son of Steven, amazed the large crowd with his skills.

“James has just turned 17 and although there’s nothing of him physically, his skill level is exceptional,” said Dessent.

“He is very talented and a treat to coach.”

Nick Halliday, Tim Tyler and Tim Roberts are among the other talented youngsters coming through the ranks at McKinnon, but it was the older heads such as Keiran Knox, Liam Wilson and Pete Mercoulia who did the damage last Saturday. Mercoulia was always dangerous and snared four goals from a forward pocket.

Despite being well held, the Dingoes were always a chance, with Andrew Frost and James Ball making their presence felt. Lively forward Calhan McQueen was among the Dingoes’ best and finished with three goals, with Luke Heywood and evergreen Tony Lavars also prominent all day.

To listen to the SFNL Radio Team's call of the Bentleigh vs Chelsea Heights clash CLICK HERE.

As always, Wiz, Coutta and the Bug recapped all the weekend's action on the Sunday Football Netball Show. To listen to their show CLICK HERE.