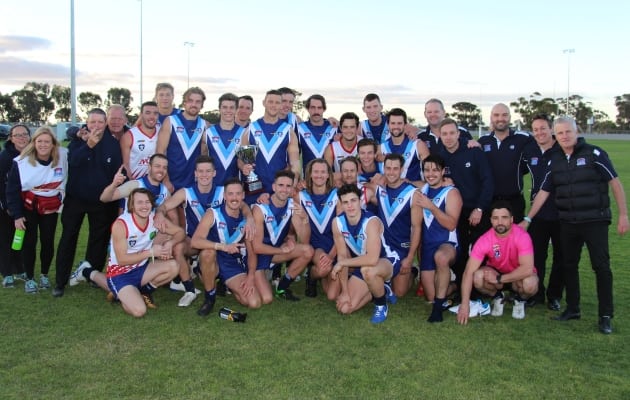 Southern has claimed its third consecutive senior interleague title after seeing off a spirited fightback from North Central FL to run out winners by nine-points in an entertaining clash at Boort Park.

It was an entertaining, free-flowing contest from start to finish, with Southern leading from go to woah, despite North Central rallying late to ensure a thrilling finish.

The visitors grabbed the early ascendancy, booting seven of the first eight goals of the match, five of which came in a dominant opening term.

The pressure applied by the Southern boys was simply outstanding, not allowing the hosts any easy possessions and continually forcing them to cough the ball up.

North Central awoke halfway through the second term and began to capitalise on Southern skill errors, and the resulting five goals in 15 minutes helped them get back into the contest.

The third term was a bit of a grind with the defensive pressure lifting on both sides, but Southern broke through with two majors late in time on to push out to a 21-point advantage at the final change.

But the hosts weren’t done and booted the first three goals of the last quarter to get back within one point at the 10-minute mark and send a scare through the Southern camp.

With the challenge laid down by the fast finishing North Central, Southern found another level. The industrious Luke Duffy slotted his second major of the day in the shadows of time on before Jordy Peryman ran into an open goal two minutes later to seal a memorable victory.

East Malvern ruckman Chris Carey was tremendous all day for the winners, working hard both in the air and around the ground to be a deserved winner of the Best on Ground medal.

Earlier, the Southern Under 19s succumbed to a late push by North Central, going down by eight points in a nail-biting curtain raiser.

There was little separating the two sides from much of the opening half, with North Central holding a three-point lead at the long break.

Southern managed to gain the ascendancy in the third term, booting three unanswered goals to take a 15-point lead into the final stanza.

But with their backs to the wall, North Central came out all guns blazing, booting 3.5 to 0.0 – including two goals in the final three minutes of the match – to steal victory at the 11th hour.

Oakleigh District’s Gianluca Cappiello was an obvious winner of the Best on Ground medal with the hard-running midfielder showing his opponents a clean pair of heals all afternoon.