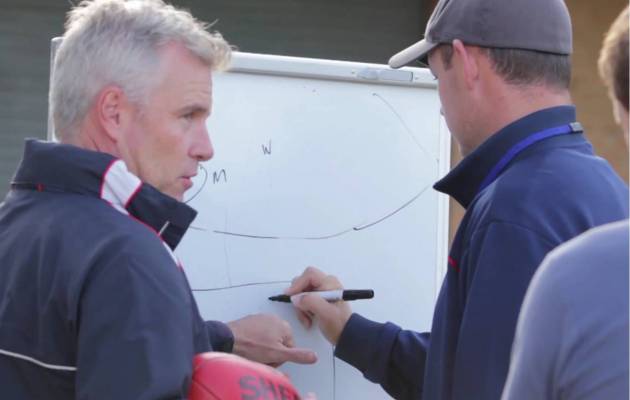 
Ben Murphy is no stranger to the big stage.

The East Brighton coach has led his side into the previous three SFL Division One Grand Finals, winning a premiership in 2012.

But after having reached the pinnacle of Southern League football, Murphy is now preparing himself for an even bigger challenge as the head coach of the SFL’s representative squad that will take on the Western Region Football League at the AFL Victoria Metro Carnival.

A man with an unbridled passion for SFL footy, Murphy said he is absolutely thrilled to represent the league he loves.

“I’ve been involved in the SFL one way or another for probably seven years, so to be asked to be involved to start with is a great honour", Murphy said.

“But (to) actually coach the side is a real privilege so I’m really looking forward to it.”

Murphy takes the reins of an incredibly talented interleague squad that features some of the superstars of the SFL competition.

One of the team’s major weapons is St Pauls spearhead Luke James. The 2013 Division One leading goal kicker, James underlined his prodigious talent with a seven-goal masterclass in last year’s Grand Final that helped his side to the premiership.

Murphy saw James’ domination in the decider firsthand and was unequivocal in his praise.

“(James’) name is synonymous with the SFL. He’s probably the most dynamic player in the competition,” he said.

“He’s just sort of freakish in his ability; what he can do in the air, on the ground and his goal sense.”

James will be assisted in attack by Cheltenham’s Chris Graham, who has incredibly strong hands for a big man.

“Hopefully the two of them lining up next to each other will give the opposition some real headaches,” Murphy said.

The reigning Kingsley Ellis medallist, Dean Williamson, headlines a star-studded midfield brigade. Murphy describes the East Brighton superstar as a “powerhouse” in the centre, and he is widely regarded as one of the best players in the SFL.

Williamson’s Vampires teammate, Damien Rayson, is another player to watch out for. Having starred at VFL level with Coburg, Rayson will bring a high degree of professionalism to the side. So, too, will hard-running St Pauls onballer, Jarryd Allan, who, according to Murphy, has been very impressive on the training track.

With such immense talent at his disposal and the players embracing the interleague carnival concept with great enthusiasm, Murphy predicted his charges will get the chocolates over the more-fancied WRFL.

“It’s going to be a hard-fought game and it will be a fairly good contest but I think the Southern Footy League will get over them and overrun them in the last quarter,” he said.

But coming into the carnival as the sixth-ranked of the metropolitan football leagues, Murphy believes that a win for the SFL will come with more than just bragging rights.

“It’s obviously going to take us up a step in the pecking order, which is a big step in itself,” he said.

“I’m proud of the league that I’m in. I know that it’s good, but I just want others to start showing (the SFL) the respect that it deserves.”

For more on the AFL Victoria Metro Carnival, CLICK HERE