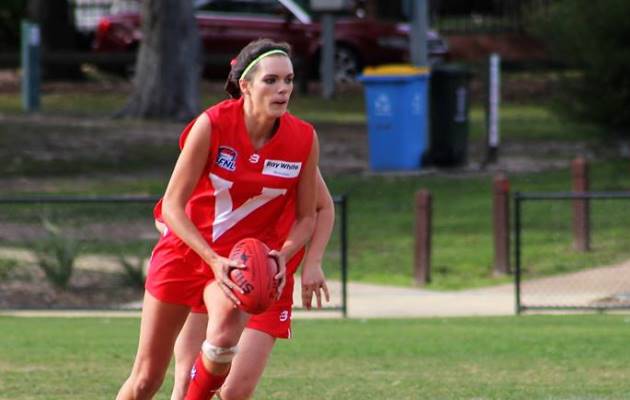 In the tightest match of the weekend, Mordialloc continued to hold off all comers with an eight point win over Oakleigh District at Princes Highway Reserve on Friday night.

After a goalless first quarter, it was Oakleigh to burst away, as their two goals to nil second quarter opened up a 10 point lead. Mordialloc woke up after half time with three unanswered goals of their own in third to take a seven point lead into the last. The Bloods added the only behind in the last to hold on.

Tanya Rosenquist, Alesha Thorne and Nat Cardamone all kicked a goal each for Mordialloc and Steph Sandoval was their best.

East Brighton continued their run towards finals as they defeated red hot Bentleigh by 53 points at Hurlingham Park on Friday night.

Sarah Burren and Marita McGregor were the Vampires’ best, as they were led up forward by Jade Barnden and Anna McDonald with three each.

On Saturday morning, Murrumbeena showed why they are one of the class sides of the competition in the game of the round with a 105 point win over Hallam at Murrumbeena Park.

Kicking with the breeze, Beena were sparked early by Danielle Wearne who kicked the first three goals of the game with one coming from inside the centre square. They would add four more in the remainder of the first quarter with two goals for Rebecca Niclasen, and one for Emma Morison and Lauren Luff.

Hallam got on the scoreboard in second quarter with two impressive goals, one for Stephanie Andersen and Kaitlyn Ligthart. They would only see the Lions margin extended from 47 points at quarter to 59 points.

Again, Murrumbeena were able to extend their lead in the last quarter with four goals to two to secure the victory. The best of the two Hallam’s final quarter goal came from Natalie Horua.

Beena’s best had a wide range of contributors, with Eliza Groves, Shanae Carter, Bridget Miller and Lauren Luff were everywhere. Danielle Wearne and Rebecca Niclasen were the dominant forwards on the ground with four goals each.

For Hallam; Natalie Horua, Michelle Thomas, Kaitlyn Ligthart and Stephanie Andersen were impressive and gave the Hawks a lot of chances in the forward 50 despite Beena’s dominance.

Edithvale Aspendale's long winless streak is over as they defeated Lyndhurst by 20 points at Glen St Reserve on Saturday morning.

It was all Lyndhurst from the start, jumping out to a 12 point quarter time lead on the back of three goals to one. But after quarter time and until the final siren they would only add another behind as Edi-Asp kicked five goals unanswered to close the game comfortably.

Jessie O'Connell, Maleah Brown and Alana Pola kicked a goal each for the Lightning.