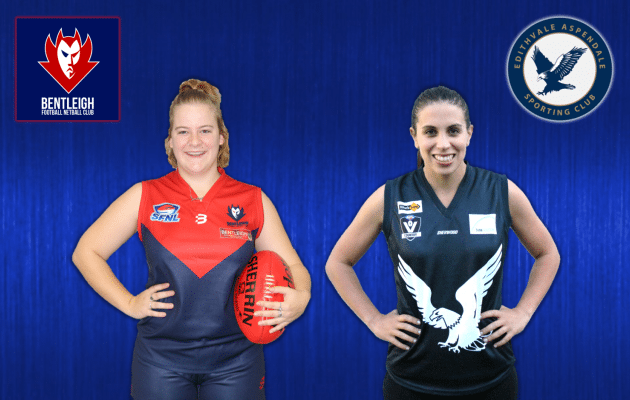 Round 6 opens with the second match up between Highett and undefeated Mordialloc again at Turner Road Reserve on Friday night.

In the first match up, Mordialloc showed their class with a 61-point victory over the Bulldogs and both sides have had differing runs since then.

Mordialloc have contended with Murrumbeena for top spot all season, being led up forward by Nat Cardamone and Aleisha Thorne, with midfielders Stephanie Sandoval and Tanya Rosenquist giving the forward line ample supply.

Highett have moved to 3-2 after back to back wins. In recent weeks, utility Ally Gilchrist and midfielders Muriel Watkins, Zoe Rossiter, Hannah Bowey and Tyra Josiah have moved the Bulldogs into finals contention. They will need to be at their best to play the Bloods close.

In the second rematch of the round, Oakleigh District this time host East Brighton at Princes Highway Reserve on Friday night.

Since that game, Oakleigh District has had a four game unbeaten run to be third on the ladder ahead of East Brighton. Danielle Wearne and Jodie Bray have been doing the damage up forward, Rachel McNamara and Jess Szalek in the middle, Alanna Brown and Alex Amzazas down back.

East Brighton has dropped two games out of their five to the top two sides. They are still led by their midfield of Monica Ward and Jessie Pham and the outside speed of Jade Barnden.

I see the roles being reversed in this match up with Oakleigh District coming away with the points.

The Falcons have been an up and down side just like Highett, dropping games against the top sides and beating the teams below them on the ladder. Renee Thomas has been a strong running option for Endeavour Hills, with Jennifer Dean and Samantha Richardson consistently supplying their goals.

Lyndhurst after their only win against Hallam have struggled to hit the scoreboard often enough. Outside Kelly Baker and Jess O’Connell, it has been slim pickings for goal scorers.

Despite their defensive strength, it will be the stronger forward line of Endeavour Hills to come out on top.

Hallam still chasing their first win will be up against it as they host top of the ladder Murrumbeena at Hallam Reserve on Sunday.

Hallam in the past two weeks have been extremely competitive and deserved to be closer to Highett and Endeavour Hills that the scoreline suggested. With Michelle Thomas and Natalie Horua in the middle, they do a mountain of work for the Hawks.

Murrumbeena are still packing on the scoring power that has seen them lead the way in the competition. Alice Kovess is their spearhead and a consistent threat, with captain Grace Bibby constantly in their best.

Hallam will try to play Beena close, but their class will take them over the top

In the Game of the Round and the final Sunday game, the winless Bentleigh side still chasing their first win face one win Edithvale Aspendale at Bentleigh Reserve.

Bentleigh like many of the sides down the ladder, have shown defensive fortitude but have lacked opportunistic forward to get them over the top of teams.

Edi-Asp has been in the majority of their games, but just allows their opposition to get away in one quarter and they pay the price.

Although I can see Bentleigh pulling an upset here, Edithvale Aspendale will come away with a close victory.