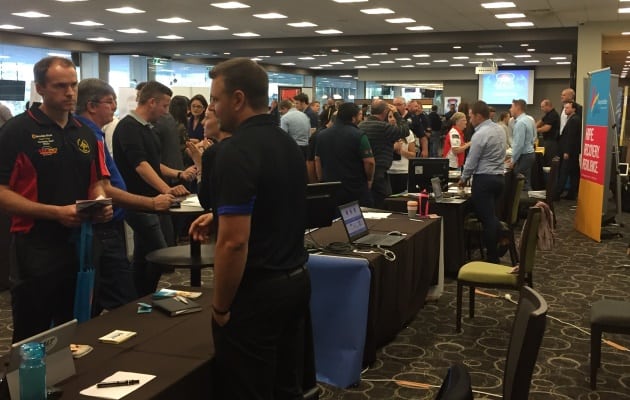 Tweet
The 2016 iteration of the SFNL Tradeshow was held last night at the Sandown Greyhound Racing Club and it proved to be a raging success.

In our biggest Tradeshow to date, 25 league partners proudly exhibited their wares to over 100 representatives from the 34 SFNL clubs.

Existing major partners Leader Newspapers, SAS Security, Sandown Greyhound Racing Club and Beiersdorf were among the 26 exhibitors with stalls set up on the night, while Red Onion, who sadly couldn't attend the evening, still offered up prizes that were awarded to clubs at the night's end.

Builders Academy Australia, who are in a partnership with the Highett Football Club, was the sole club sponsor in attendance.

SFNL CEO David Cannizzo said the event was an overwhelming success and commended both the league’s partners and clubs for their contributions to the night.

“On behalf of the SFNL I would like to thank our partners for their generous and ongoing support, as well as our member clubs for getting behind the night and contributing to its overall success,” Cannizzo said.

“The event itself was not only very well attended, but all attendees made every effort to get the best out of the night, which was fantastic to see.

“It was very pleasing to see the a great synergy between our partners and member clubs and we hope this relationship can continue to bear fruit well into the future.”

The event provided a wonderful networking opportunity for the League's partners to engage with SFNL clubs and both parties enjoyed the benefits of the relaxed and social atmosphere.

Thank you to all SFNL partners who attended the 2016 SFNL Tradeshow: