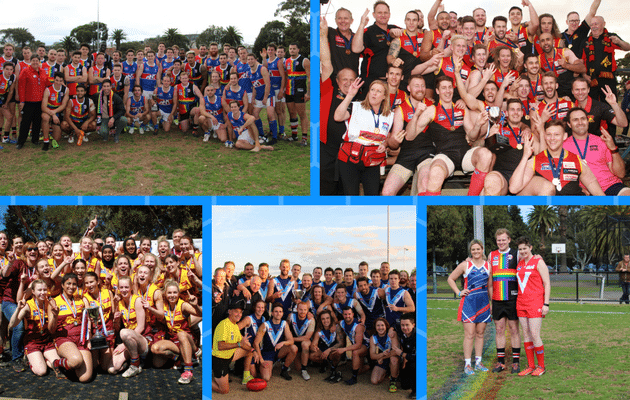 Tweet
Season 2017 has certainly been a memorable year for the SFNL, with several firsts and ground-breaking initiatives taking place. Let's take a trip back through the archives and revisit the year that was.

After much groundwork in the preceding 12 months, the SFNL Women's Football season finally launched in late April, with 10 teams making up the competition in its foundation year. After a Season Launch function at Hurlingham Park featuring several distinguished guests including St Kilda champion Nathan Burke and Collingwood AFLW ruck Emma King, the inaugural match kicked off between East Brighton and Oakleigh District under Friday night lights. The night belonged to the Vampires as they claimed a historic first win, but the Districts would have the last laugh as they improved considerably as the season progressed, and upset Mordialloc in the penultimate match of the season to advance to the Grand Final. But nothing could stop the powerful Beena girls, who swept all before them to claim the SFNL's first Women's Football premiership in a stunning undefeated season.

After the roaring success of last year's Pride Shield clash between St Kilda City and St Pauls, the SFNL's celebration of pride was this year extended to an entire league-wide themed round. It was a historic occasion, as it was the first time a dedicated Pride Round had been instituted in any sporting organisation in Australia. And the buy in was massive, with all senior mens and women's footballers, and all netballers wearing rainbow laces in their boots or runners in matches over the weekend. Additionally, through the support of eight local councils, all 20 football ovals in use over the weekend were painted with rainbow 50m arc in show of support for the LGBTI+ community. Over at the Peanut Farm, a special Pride Cocktail Event was held, with special guests including MP Martin Foley, 2017 Young Australian of the Year Jason Ball, AFL legend Russell Greene and daughter Angie, the CEO of Stand Up Events. More than 100 people attended the event, before the annual Pride Cup match between the Saints and the Doggies. All up, the Pride Round saw the participation of more than 4000 players, umpires, coaches and team volunteers from more than 100 football teams and the 32 netball teams participating in the Semi Finals.

The SFNL again had the rights to host representative football matches as part of the 2017 Worksafe AFL Victoria Community Championships, with Central Highlands Football League fixtured as our opponent in Senior and Under 19 football, and Senior and Under 17 netball matches. And it was another successful afternoon at Marriott Waters Reserve, as the Senior Football side made it two wins in a row with a narrow four-point victory over the Highlanders. The Under 19s also had cause to celebrate, as they registered their first representative victory, running out comfortable winners by 35 points. Unfortunately there was no joy for our netball girls as they succumber to Central Highlands 39-71. The Under 17 side, represented by the Springvale & District Netball Association, were 37-26 winners over the visitors.

MATCH REPORT: Southern goes Back to Back

The League will have two new entities in 2018 after the formal acceptance of Hampton Park FNC and Frankston Dolphins FNC. The Redbacks join the SFNL after the state governing body recently approved a transfer from South East Football Netball League, while the Dolphins, an established junior club with no ties to the VFL side of the same name, will enter its inaugural senior team in the Southern league next season. This league growth will see the league split into four divisions next year for the first time since 1998, with Cerberus also making a return to senior football in Division 4.

Dingley have cemented their status as the greatest Southern team of the modern era as the swept to their third consecutive Division 1 Senior premiership. The Dingoes are the first side since the dominant Balwyn from 1998-2000 to claim a hat trick of flags, and they did so in style. They finished as minor premiers for the fourth straight year, dropping four games for the season before suffering a 10-goal loss to the powerful Mordialloc in the Second Semi Final. After eclipsing a tiring Bentleigh the following week, it ensure another date with the rival Bloods in the last Sunday in September. A blustery day confronted both sides, with a five-goal breeze (conservative estimate!) favouring the Springvale Road end. It made scoring difficult, but the Dingoes mastered the conditions and rose to the occasion in the premiership quarter; they kept Mordialloc scoreless with the wind while adding one of their own - the only goal scored at the grandstand end for the match. A seven-goal final term put the exclamation mark a a stunning victory that will ensure the 2015-17 Dingoes are etched in the history books for eternity.


Chelsea Heights Rise Back to Division 1

The Heighters will be back in Division 1 next season, two years after their relegation, following their Division 2 Grand Final triumph over Murrumbeena. Chelsea Heights were clearly the team to beat all season, and it took until Round 12 for them to taste defeat for the first time, coincidentally against their opponent in the big dance. The Beena meanwhile had five losses in its first seven games, but played incredible football in the back half of the year to finish fourth and eventually progress to the Grand Final. Their red-hot form also carried into the decider, and led by as much as 20 points late in the third term. But the Heighters flexed their muscle and stormed home with the breeze to take the crown in an entertaining contest.

Division 3 Decider Goes Down to the Wire

In one of the most exciting Grand Finals you are likely to see, Doveton Eagles were crowned premiers in Division 3 after pipping Endevour Hills in a four-point heart-stopper at Jack Barker Oval. The Falcons were a story in themselves, having qualified for its first ever senior finals series since its inception in 2011, and defeated hot flag favourites Hallam to advance to a fairytale Grand Final. The Eagles, meanwhile, had their own remarkable run, finished fourth on the ladder before defeated fifth-place Black Rock, second-placed Ashwood and minor premier Hallam in consecutive weeks to reach the decider. It was a dream match up, and one that didn't disappoint. The Eagle were the early aggressors, and took a 22-point lead into the sheds, but Endeavour Hills fought back in the premiership quarter, booting seven straight goals to surge ahead in one of the most impressive quarters of Div 3 footy you will see. Confronted with a 26-point deficit in the final term, the Eagles then booted the final five goals of the game, including the match winner from former Melbourne high-flyer Russell Robertson in time-on, to complete one of the all-time great grand final heists.

In a new initiative for 2017, the League held a new pre-season tournament at Springvale Reserve, the Seymour Law Cup, which was proudly supported by former SFNL Chairman Mark Seymour. Eight teams across all three Divisions participated in the four-week night series competition, with $3000 prize money on offer for the winner. In the end, rising Division 3 power Hallam took on 2016 Division 1 grand finalist Benleigh in the Grand Final, wih the Hawks upsetting the Demons by a point to claim to inaugural trophy and winner's cheque.


Heatherton Goes Back to Back

The Tonners confirmed its status as the powerhouse netball club in the comp as it again outclassed Dingley to win its second straight Division 1 Netball premiership. Super shooter Rahni Samason took home the Best on Court Medal as Heatherton stormed to a convincing 59-40 victory. The black and whites also went back to back in Division 2 with a 47-22 win over Caulfield. Other netball premiers included Dingley (Div 3), Dingley Gold (Div 4), Caulfield (Div 5), Heatherton (Div 6), Oakleigh District (Div 7) and Keysborough (Div 8).

The SFNL again strengthened its partnership with beyondblue, with another League-wide beyondblue Round held in early July. St Pauls hosted this year's annual beyondblue Cup with a clash against local rivals Bentleigh at McKinnon Reserve, and a well-attend pre-game luncheon. In addition, all clubs were given the opportunity to purchase beyondblue co-branded socks, with proceeds raised benefitting the mental health organisation. Through these and other club-driven fund-raising activites, it resulted in more than $12,000 being donated to beyondblue.

This year saw three SFNL stalwart earn induction into the prestigious SFNL Hall of Fame - Neil Kellett, Emrys Lloyd-Griffiths and Daryl Pitman. Kellett, affectionately known to many as Ned, is one of the League's great administrators. A longtime President and Secretary of the Ashwood Football Club and precursor Burwood, Kellett's shrewd administrative nouse almost single-handedly save the club on multiple occastions. Lloyd-Griffiths, a luminary of the Murrumbeena Football Club, has a list of achievements longer than Flemington straight, but has served multiple roles on and off the field over the last 40 years, including as President, Secretary, player and coach, and most recently led the Beena girls to the inaugural SFNLW premiership. Pitman, meanwhile, is the first person to be inducted on the basis of his media work. A pioneer of community football media, Pitman not only served as the league's Media & Communications Manager, but established the Southern Footy Show on C31 (now the Local Footy Show), broadcast Southern matches on 88.3 Southern FM and made vast contributions in the print media sphere with the Leader Newspaper.