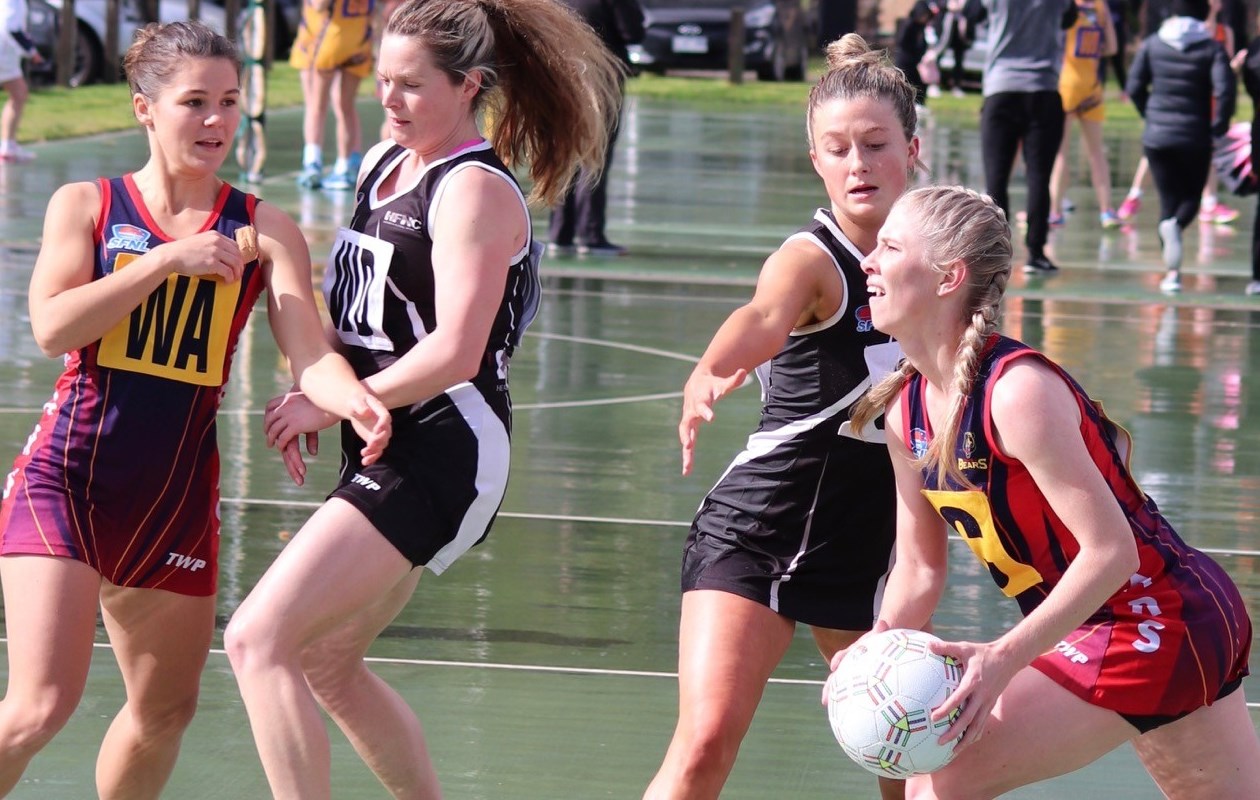 The competition is now down to two teams each in all divisions after a cold, windy and soggy Preliminary Final day. Several divisions will be fought out between teams from clubs that have never before tasted premiership success. And, for the first time since 2013, there will be a new name on the division one premiership trophy.

Heatherton controlled the early minutes of the final against Caulfield. They looked the more settled side as Ella Batish gave them the early advantage, the pressure that their mid-court brought to bear causing several misplaced passes before Caulfield were able to seize control. That they were able to owed much to the tireless running of Domica Wescombe and Steph Clemons, whilst Sophie O’Shea and Beth Wilson shot unerringly, and a 9-7 quarter time lead ensued. The evenness of the game continued in the second term, as Maggie Carlon and Brie Reichmann both set up opportunities for their shooters, but late in the quarter the break came that was to prove decisive. Sophie O’Shea landed four goals without reply to extend the Caulfield lead from one to five, a margin that was held until the main break. Heatherton looked to hit back hard in the third term but could get no closer than two goals before Caulfield would pull away once more. 34-29 was the three quarter time lead, and Caulfield looked to have the game sown up when that lead was extended to eight midway through the fourth quarter. Heatherton were to fire one last shot, as all champion teams do, going on a five goal run of their own, but it was too little too late as the Bears steadied to win by 43-39.

In the end, a long injury list and the lack of a bench hampered the defending two time champions. Would this have made any difference to the result? We’ll never know, but having defeated both Dingley and Heatherton in successive weeks no-one can deny the right of Caulfield to join fellow debutantes Mordialloc in the Division 1 Grand Final.

Heatherton did win the right to contest the Division 2 Grand Final. Murrumbeena have been a breath of fresh air in this competition, but they were well outgunned by a Heatherton side that were in no mood for pleasantries. Murrumbeena started very slickly, with Jarrah Thomson giving them the first two goals of the match, but that was the beginning and the end of the domination by the Lionesses. Heatherton took complete control with Jaime Regnier and Courtney Weiske in the mid-court, and the hard-working defensive pairing of Erin Naismith and Neomal Taufa cutting off numerous Murrumbeena attacks, as the ruthless Tunners established a 12-5 quarter time lead. Murrumbeena had to start the second term well, but Heatherton scored five of the first six goals to eventually lead 25-11 at the half, and that was that. The Beena showed plenty of spirit to be competitive to the final siren, with Paris Tatter and Megan Hendry impressive, but Heatherton won every quarter to triumph by 47-29 and earn another shot at Cheltenham next week.

Division 3 was a pulsating clash between Dingley Gold and Heatherton, in which Dingley won through to next week’s decider against St Kilda City and Heatherton wondered what might have been. The Tunners took a one goal break to the first change before the Dingley attack got into gear. A dominant second quarter saw the narrow deficit converted to a six goal half time lead. This was to be the only quarter that Dingley won for the day, and although Heatherton were able to hold their own right to the final siren they were only able to reduce the margin by four, finally succumbing by 41-39. Heatherton bow out as worthy challengers, having won in extra time the week before and only lost by two here, and had the game gone an extra few minutes who knows what the result may have been, but the top two sides meet in the Grand Final in what should be another closely run affair.

There was no such panic for Heatherton Black in Division Four, as Caulfield Yellow found this a bridge too far. Heatherton led by two at the first change, but Heidi Samason ran riot in the second quarter, netting 19 times to capitalise on the opportunities provided by the likes of Nicki Arnold and Emma Eckhardt in the mid-court. A 29-19 half time deficit was too much for the Bears to peg back, although they had the fortitude to win the third quarter and be competitive in the last, but Heatherton Black will take some measure of confidence from this game into their grand final against hot favourites Murrumbeena.

The fairy tale continued for East Brighton in Division 5 as they took on a weakened Oakleigh District, and put them away with clinical efficiency. Both sides were forced to call on troops from lower divisions to bolster their line-ups, but East Brighton rode in on the momentum that has brought them from fifth place to the last week of the season, and were not to be denied. Oakleigh District were never in the hunt here, and although they had some good passages of play the hungry Vampires would not allow them to get their fluid passing game going for long. East Brighton won every quarter, and dominated the final term against an Oakleigh side that by then had had enough to win by 44-25. Can they challenge Lyndhurst next week? You wouldn’t put it past them. We’ll soon know...

Doveton Eagles were clearly one of the two best sides in Division 6 over the home and away season. Their opponents, Keysborough, are a well-organised defensive unit that make their opponents work hard for every minute of the match, and though they started well in this match they found Doveton a little too good on the day. Trailing by one at quarter time, Doveton were only able to lead 15-13 after a very competitive first half, but there was to be no let up from the Eagles girls as they assumed control in the all important third stanza. A 26-17 deficit was too much to counter in the final act of the play, and though they remained as game as they come Keysborough were only to get as close as 34-23. Doveton Eagles therefore play Mordialloc Red for the third time in four weeks in the competition decider.

The previously unbeaten Lyndhurst side were beaten for the second week running to crash out of the competition at Preliminary Final stage. Hampton therefore play Murrumbeena in next week’s decider, neither side having tasted premiership success in the history of SFNL netball. When Lyndhurst steadied after a nervous first quarter to come into the main break even and the three-quarter time huddle one goal up, many assumed that the Lightning would do what was needed to progress, but no-one gave the script to the Hampton girls. With the mid-court taking control and goal shooter Elise Heitmann irresistible, Hampton unleashed a withering 12-3 last quarter burst to win by 33-25 and take their place in their first grand final.

It’s a Hallam derby in the Division 8 decider as Hallam Yellow came from behind to beat Lyndhurst by 39-37. It had all seemed so different in the first half as the Lightning led by six at both the quarter time and the half time breaks, but as the second half wore on it was Hallam Yellow that ran over the top of their fancied opponents. The margin was cut to two at three quarter time, and with Maeve D’Arcy lifting her team with her energy and efficiency at goal attack, Hallam took the lead early in the final term. A serious ankle injury to Hallam defender Kathleen O’Flaherty threatened to arrest the momentum, but the subsequent court change saw Hallam Yellow run the game out to join Hallam Red in the Grand Final next week.

When Heatherton scored the first five goals of the Division 9 Preliminary Final, the outlook for Lyndhurst looked as bleak as the skies overhead. However, this Lyndhurst side is made of stern stuff, and they worked brilliantly as a team here to arrest the early deficit. The lead was taken just before half time, and was not to be relinquished as Lyndhurst dominated the second half to win by 36-28. Leisa Finkelde played a lone hand in attack from Heatherton, netting 25 times, but this was cancelled out by 24 from Lyndhurst’s Jenna Bousfield, and with Montanna Schuld providing an excellent foil they were able to keep the scoreboard ticking over enough to win through to the decider against South Yarra.

This column has been very impressed by the standard of netball provided through this finals series. Here’s hoping that our fair city’s fickle weather plays its part next Sunday, and shows the play in its finest light. The very best of luck to all players, coaches, umpires and broadcasters on a momentous day for SFNL netball.