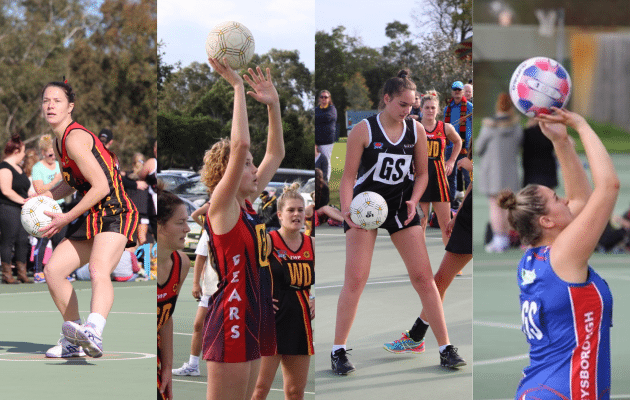 Tweet
The 2016 Division 1 Netball season will certainly go down as one of the best ever. The standard of netball took further strides forward, with standout performances from the league's best players punctuating what proved to be a tremendously even competition. The all-round strength of the Dingley and Heatherton teams helped them through to this year's Grand Final, while Keysborough and Division 1 debutantes Caulfield also showed that they have the top-end talent to challenge the best. And despite missing out on a finals berth, even Bentleigh and St Kilda City had their stars shine on their day.

And to celebrate the outstanding contributions of the league's biggest stars in 2016, SFNL Netball expert Hugh Maclean has put pen to paper to select his Netball Division 1 Team of the Year.

We’ll start off with one that might be a little unexpected, but wouldn’t be quite so for anyone that watches St Kilda City week in, week out. Fiona often battles against opponents that have her covered for size, and who are blessed to be serviced by abundant supply of good quality ball. There would not, however, be too many occasions where the opposition shooter would have said they had an easy day. For sheer consistency in difficult situations, Fiona White gets the gong for me.

Picks herself, really. Plays every match with bulldog-like tenacity; she wouldn’t give her grandmother an easy possession. There’s a bit more to her than that, though. Alicia oozes leadership without being overly demonstrative, and has the ability and foresight to direct the play in starting Dingley’s counter attacking raids. Widely regarded as one of the SFNL’s premier players, there has been little disappointing about Alicia Wise’s 2016 season, and was duly rewarded with her second Netball Division 1 Best & Fairest Medal in as many years.

Consistency personified. Wing defence is one of the more important positions on the court – the shutting down of threats before they get to the dangerous stage often being vital to the success or failure of the side. Emma Daley doesn’t have too many frills to her game – she’s not a great one for seeking the limelight. She just gets the job done. Rarely beaten and happy to perform whatever role is asked of her by her coach.

An Energiser bunny that never stops running hard, Megan Kennedy is vital to Keysborough’s success and a pivotal link between defence and attack. The Borough’s ball movement can be some of the most clinical and penetrative in the competition, and a lot of their best work comes when Megan Kennedy can get the ball into her hands. She has the smarts and the range to play the intelligent pass and set up opportunities for her shooting division.

Shae is another elite runner who continually drives hard for the betterment of her team. Her speed and fitness is aligned to the experience to know when and where to run, and the right pass to make. Having already played in four grand finals and winning three, one of the big questions of Dingley was whether they would have the hunger to go again in 2016. The form of Shae Wonnacott went a long way to showing that they had.

The joint Division 1 Best & Fairest winner is a player that commands the ball. She will often work the perimeter of the goal circle, and her accuracy from all points of the shooting area is the factor that gets her the position in this side. Mixing height with agility, Rahni is very good at being in the right place at the right time and has a shooting percentage that most can but dream of. She also has the happy knack of playing her best netball when the occasion is at its most important.

The captain of the caravan is also the captain of my team of the year. Sophie is chosen as the deeper of the two shooting options who, as with Rahni Samason, is blessed with excellent positioning. When the pass does find her, she has the height and reach to be very difficult to stop, and from her position near the post she rarely misses. She also has the quiet authority which is the mark of a natural leader.

Sara has the ability to fill numerous positions in the mid-court, and to do it with tenacity and efficiency. Possessed of the natural competitiveness not to shirk any contest, Sara plays every match as though it is going to be her last. An expert in the art of interception, she is another natural leader who could do any job asked of her and do it well.

Another who has the versatility to step into any mid-court role. Makayla is an attacking player at heart whose method is to win the ball and then to use it to the advantage of her team mates. She will often drive forward and set up play for those in the offensive positions. Makayla can win the game off her own hand and has to be closely guarded by any foe.

A commanding player in any goal circle who doesn’t mind mixing it when any defender looks to get physical, Abby Mackie provides the perfect foil for any shooting partner. She has height, strength and competitiveness on her side, and when she does get the ball she has the ability to make her opponent pay on the scoreboard.

A tall young player who has the versatility to play in both the attacking and the defensive goal circle. Tobi is an excellent natural reader of the ball who can either capitalise on the work of those in the mid-court, or be given the job of stopping an opposition shooter, and do it with equal aplomb.