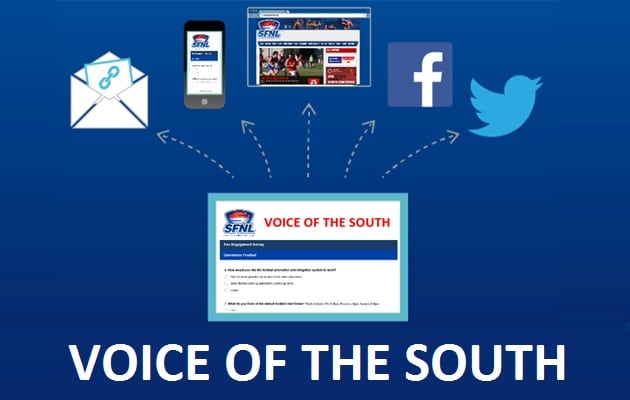 SFNL launches Voice of the South

Tweet
The Southern Football Netball League (SFNL) today officially launches Voice of the South, a League initiative to continue to evolve the SFNL through a series of fan engagement surveys with the input of various stakeholders.

The surveys will feature a wide range of questions on all areas of the League that will be broken down into six short monthly surveys, with each month focusing on a different topic. The first phase of the survey is designed to give SFNL players, officials and fans an opportunity to provide feedback on the operations of the League regarding fixtures, tribunal and umpiring.

In addition to players and officials, many SFNL supporters will be engaged via email, SFNL TV, social media, on match days across all divisions and online at http://bit.ly/SFNLVOTS.

The SFNL’s vision is to remain a strong, successful and sustainable League. The SFNL wants a legacy that past, present and future generations can continue to be proud of and believes an imperative step towards achieving this is to engage with and listen to the views of as many stakeholders as possible.

To commence this journey, the League is asking all players and officials to take a few minutes to complete the short survey, which will give them the opportunity to share current thoughts and opinions with the SFNL. It will also reward the club that submits the most completed surveys each month a credit of $500 into their account. To qualify, a minimum of 50 surveys must be competed each month per club.

We are also rewarding two lucky people each month with a $50 gift voucher just for completing the survey. The launch of this survey is just the start of the SFNL’s plan to enhance fan engagement and we look forward to greater stakeholder input.

Own the South by being part of Voice of the South