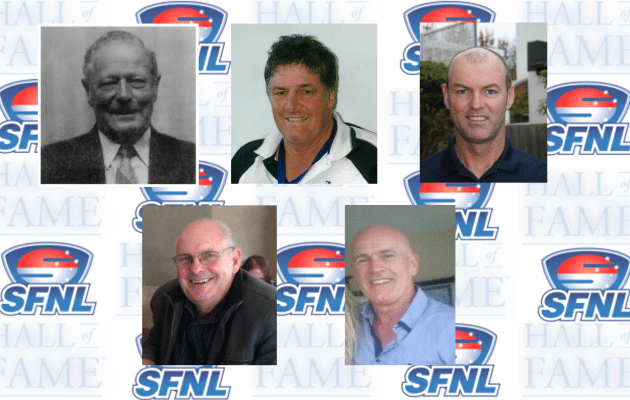 The ‘Jim Meneilly’ medal honours perhaps the most influential person in SFL history.

Across all three divisional grand finals, the medal is presented to the player on the field that best represents Meneilly’s contribution and achievements. To walk off the field with the ‘Jim Meneilly’ medal is truly special.

Meneilly’s influence on the league dates back to the 1960’s. With help from people at his church, he built Bentleigh Methodist FC in 1965. The football club’s aim was to provide an engaging, positive activity for his sons and other youth. Meneilly loved sport and getting the boys involved.

Under Meneilly’s presidency the club thrived. In three short years, Bentleigh Methodists FC won their first grand final by 98 points. Jim continually wanted to inspire his team, organising people like Dick Reynolds and Tom Hafey to speak at the club.

Fairness was very important to Meneilly. He loved to see good spirited football, which was echoed by his team. Contests with clubs like Donvale United in the ‘70s were always great matches with terrific skills. The era saw generally rough football; yet the crowd was always treated to great sportsmanship when the two clubs played.

Meneilly’s efforts saw the club travel up through the divisions in the Churches league. In 1975 Jim was invited to join the leagues committee. His attention shifted to all the clubs, rather than just his own.

He was a regular fixture at many club game days, joined by a team of volunteers. Mending woolen jumpers, preparing food for spectators, the organiser always had great help.

Meneilly was league president by 1983. His style of management benefitted all the people around him: encouraging his colleges whilst challenging them. Working as an investment group manager, Meneilly had many skills that benefited the league.

Needing a place to meet, the committee hired a building. When it went up for sale, Meneilly suggested they buy it. The committee explained they didn’t have the money. Jim replied, "I’ll get you the money and I’ll teach you how to pay if off."

Purchasing the building was a pivotal milestone in league history. Jim spent hours at the league office doing handy-work. He believed it was worth saving money if he could fix things himself. He added large meeting rooms, constructing much of all the timberwork himself.

President until 1989, Meneilly left the league in very capable hands.

Following his passing in 1990, the league established the medal in his honour. Every year, Jim’s sons travel to each divisional grand final to personally award the winner with their father’s medal.

The boys describe Jim as the ‘fix-it’ man. He led by example, he looked out for everyone with a readiness to teach. He stood for fair play and good sportsmanship. Nobody encapsulates the spirit of the Chelsea Heights Football Club more than Neil Lockhart.

For more than three decades, Lockhart bled navy and red and established the Heighters’ standing as one of the premier clubs in the SFNL over the last 15 years.

A full forward/centre half forward, Lockhart joined the club as a player in 1981 back when they were part of the South West Gippsland Football League and he topped the competition’s goalkicking in 1982.

But when a spate of shoulder injuries curtailed his career, Lockhart decided to make his mark off the field. He joined the football club’s committee in 1985 (while he was still playing) and assumed the Presidency in 1997. With the exception of a year off from the club in 1992, he remained in both roles until the end of last season.

During his time he has seen the club go from strength to strength. Among the highlights were senior SFNL premierships in 1995 (Lockhart was runner that day) and 2000, which saw the club ascend from Division Three to the top grade.

Lockhart was also instrumental in initiating and facilitating the redevelopment of the amenities at Beazely Reserve. Such is his standing at the club they named these new facilities in Lockhart’s honour.

“We (built) brand new rooms about seven years ago. They were fantastic, on the wing,” Lockhart said proudly.

“A terrific facility, we went from the old rooms to, you know, electronic scoreboard, new cricket nets... so it’s a pretty good complex.”

Along the way Lockhart has earned almost every accolade the club could afford him, including life membership and induction into the club’s Hall of Fame.

Lockhart’s longevity at the club is remarkable. But as the old adage goes, behind every great man is a great woman, and he credits his wife with helping him stay at the club for so many years.

“The wife was a big help. She was in the canteen for about 20 years. So she was on board so that was sort of our life,” he said.

Although Lockhart’s affiliation with the club has ended in an official capacity, his love for the club hasn’t diminished one bit. He can still be found down at Beazley Reserve on Saturdays pitching in where possible.

“(It’s hard to walk away from the club) because I’ve been involved for so long,” Lockhart admitted.

“I go down to games and help them where I can.”

Key defenders are close to the most important players in any footy side, yet they are often typecast as unfashionable and never get the kudos they deserve. Especially when it comes time to hand out gongs.

You have to go all the way back to 1983 to find the last time a key backman won the Brownlow Medal (North Melbourne great Ross Glendinning), which is what makes David Martin’s achievements so extraordinary.

To win one league Best and Fairest while playing as a tall defender is a terrific effort. To win six in a row across two separate competitions is frankly unbelievable. But that’s exactly what he did with Bentleigh in the late 90s and early 2000s.

Martin, a 6-foot-3 centre half back, joined the Demons in 1995 and quickly established himself as one of the side’s most influential players, earning himself the nickname ‘freak’ – a nickname Bentleigh President Garry Matlock said he thoroughly deserved.

“He was a freakish player. At local community level to see that type of player running around and playing on the quality players that he played on... yeah he was a freak,” he said.

“He was an outstanding mark... He wasn’t a leaper, he didn’t leap over players all the time, but his judgement was incredible.

“We used to sort of say ‘we don’t need anyone else there in the backline because we have David’ because he just had this ability to read the play.”

In his second year at Bentleigh he won the first of seven consecutive club B&Fs, before going on to claim three SFNL Division One Best and Fairest awards in a row between 1997 and 1999.

The Demons transferred to the VAFA in 2000 and Martin’s dominance continued, winning comp Best and Fairests in Divisions Four, Three and Two in successive years.

The ultimate success, however, unfortunately eluded Martin during his time at the Demons, though twice they were runners up in the VAFA (2000 and 2001).

Martin was officially recognised for his illustrious career when AFL Victoria presented him with an Outstanding Individual Achievement Award in 2008. He is also a life member of the Bentleigh Football Club.

Matlock described Martin as a “scrupulously fair player” and was unequivocal in his praise of him as a person.

“He is a real gentlemen and a lovely fella. Tremendous guy,” Matlock said.

He also praised Martin’s loyalty to the club, which was most evident when he stuck by his mates as the club transitioned into the Ammos, rather than chasing the big bucks he could have commanded at other SFNL clubs.

A humble and unassuming champion, Martin’s induction into the Hall of Fame is a just reward for one of the SFNL’s greats. Dennis Malcolm’s substantial contribution as a football administrator has previously been recognised by the SFNL naming a medal in his honour. The Malcolm Medal is awarded to the best player in the Division 1 Reserve Grand Final.

He was awarded life membership of the SESFL in 1977 and has been a life member of the SFNL since 1997.

Malcolm is currently overseas, but his daughter Anthea Mete speaks of his passion for the sport of football and his involvement in suburban footy.

“It’s definitely been something that has meant a lot to him. He’s always been quite proud of his involvement and taken it quite seriously,” she said. Mete describes football as one of her father’s “true passions” and adds that he takes pride in presenting the Malcolm Medal each season.

In the year 2000, Malcolm received an Australian Sports Medal for services to the AFL.

Football is not his only sporting passion as he is also interested in horse racing and breeding, and water skiing.

The SFNL is grateful that during his busy professional career Malcolm devoted so much time and energy and expertise to the smooth running of the league and it is fitting that he has been inducted into the Hall of Fame.

A more humble champion than Ian Birkett you will not find.

Affectionately known to most as 'Rabbit', Birkett was an out and out superstar of the ESCFA, the dominant player of his era. But you will never hear him say as much. In fact, he will likely be slightly embarrassed reading this article, such is his modesty.

However, there is no denying his standing as one of the all-time greats of the ESCFA.

His well-known nickname was given to him by his first coach at Burwood United, who coincidentally was fellow 2015 SFNL Hall of Fame inductee Jim Honey. Birkett, aged just 11 at the time, was playing in the Under 15s with his older brother when Honey likened him to a rabbit because of his smaller body, his zip and his willingness to burrow in for the footy. It has stuck with him ever since.

From those humble beginnings Birkett went on the win the ESCFA Under 17s league Best and Fairest and soon developed into a supremely versatile senior footballer with a penchant for the spectacular. He played his best footy as a blisteringly quick onballer, but was equally dangerous up forward and was a renowned goalkicker. With strong hands, lovely foot skills and ability to play multiple positions, Rabbit was the complete package.

“He was pretty much known as the superstar of the ESCFA in the A-Grade sides,” Honey recalled.

“He was a magnificent mark of the ball and he could take screamers over packs and things like that and did so on a regular basis throughout his career.”

Birkett proved remarkably durable over his career too, playing over 400 games with both Burwood United and the now-defunct SFNL club Mt Waverley-Burwood. In his prime he won four ESCFA A-Grade Best and Fairest awards between 1985 and 1990 and was also crowned the ESCFA’s leading goalkicker in 1985 (84 goals) and 1987 (70).

But Birkett said that his career highlights were undoubtedly the two flags he played in with Burwood United. He won his first premiership medallion in 1983, before taking a hiatus from footy the following year to go travelling overseas with a mate. He returned to the club in 1985 and was a dual premiership player by season’s end.

“That’s what you play for, you know,” Birkett said.

“I was lucky enough as a junior we were in a lot of finals. We were pretty strong back then, Burwood... but to win the senior (flag) obviously that’s the ultimate.”

Birkett may be loath to speak about his glittering career, but those that witnessed him will agree that he was one of the greatest ESCFA players of his time.

To read about our other Hall of Fame inductees CLICK HERE