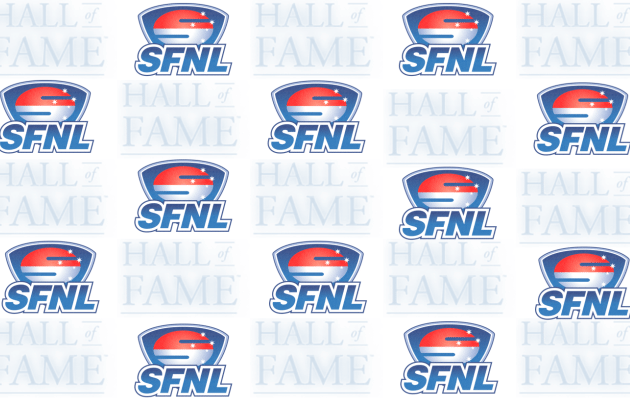 Tweet
Every football person is charmed by the notion of the local hero who “could have made it” in the big time of League football.

Kevan “Icy” Hamilton’s tale goes one step further than that. He actually did make the grade at the highest level in a major way, but suddenly fell out of favour and headed back to local footy where his impact was enormous.

He was recruited from McKinnon by the all-conquering Melbourne, but the legend has it that he was axed after arguing with famed coach Norm Smith at training. Picked up by Carlton for the 1956 season the tall rover and forward pocket made an instant impact with eight goals across his first two games, but he didn’t retain his spot consistently and finished with a season total of 11 games and 22 goals. That 22 goal total was enough to earn the ranking of Carlton’s leading goalkicker in a low scoring era. The Blueseum website notes that he once triumphed in a charity day kicking contest at Williamstown by roosting a footy 75 yards

In 1957 he languished in the Carlton reserves without adding a senior game and was cleared back to McKinnon at the end of the season. At his original club he had a mercurial career winning no less than five competition best and fairests in the Federal Football league.

Now Icy Hamilton is one of 22 inaugural inductees to the Southern Football Netball League Hall of Fame. The SFNL Hall of Fame was launched earlier this year to recognise and celebrate people who have made significant contributions to the SFNL or its forerunner competitions. The inductees have been selected from their involvement in the SFNL and its ancestors – the Federal Football League, Eastern Suburbs Churches Football Association and South East Suburban Football League.

The SFNL Hall of Fame sub-committee received over 60 nominations which were carefully considered and attributed to different categories of player, administrator, official, coach, umpire, media or life time achiever.

The quality of the nominations was outstanding and made for an extremely difficult task for the SFNL. The sub-committee assessed the nominees over many areas including longevity, quality of performance, integrity, sportsmanship, good character and promoting the values of the SFNL or the forerunners FFL, ESCFA and SESFL.

SFNL Board Chairman Mark Seymour believes the inductees selected are a wonderful representation of all the volunteers in community football in the last 60 years.

“The SFNL very much look forward to celebrating and recognising the 22 inductees at the inaugural Hall of Fame function in July,” Mark explained.

“Volunteers are the lifeblood of community sport and the SFNL are delighted we have the ability to honour these outstanding contributors to the SFNL and its forerunners.”

• The SFNL Hall of Fame function will be on Wednesday 8 July at Sandy by the Bay, Trevor Barker Oval, Sandringham. Tickets are available for $55 per person through the SFNL office on 9553 5644.