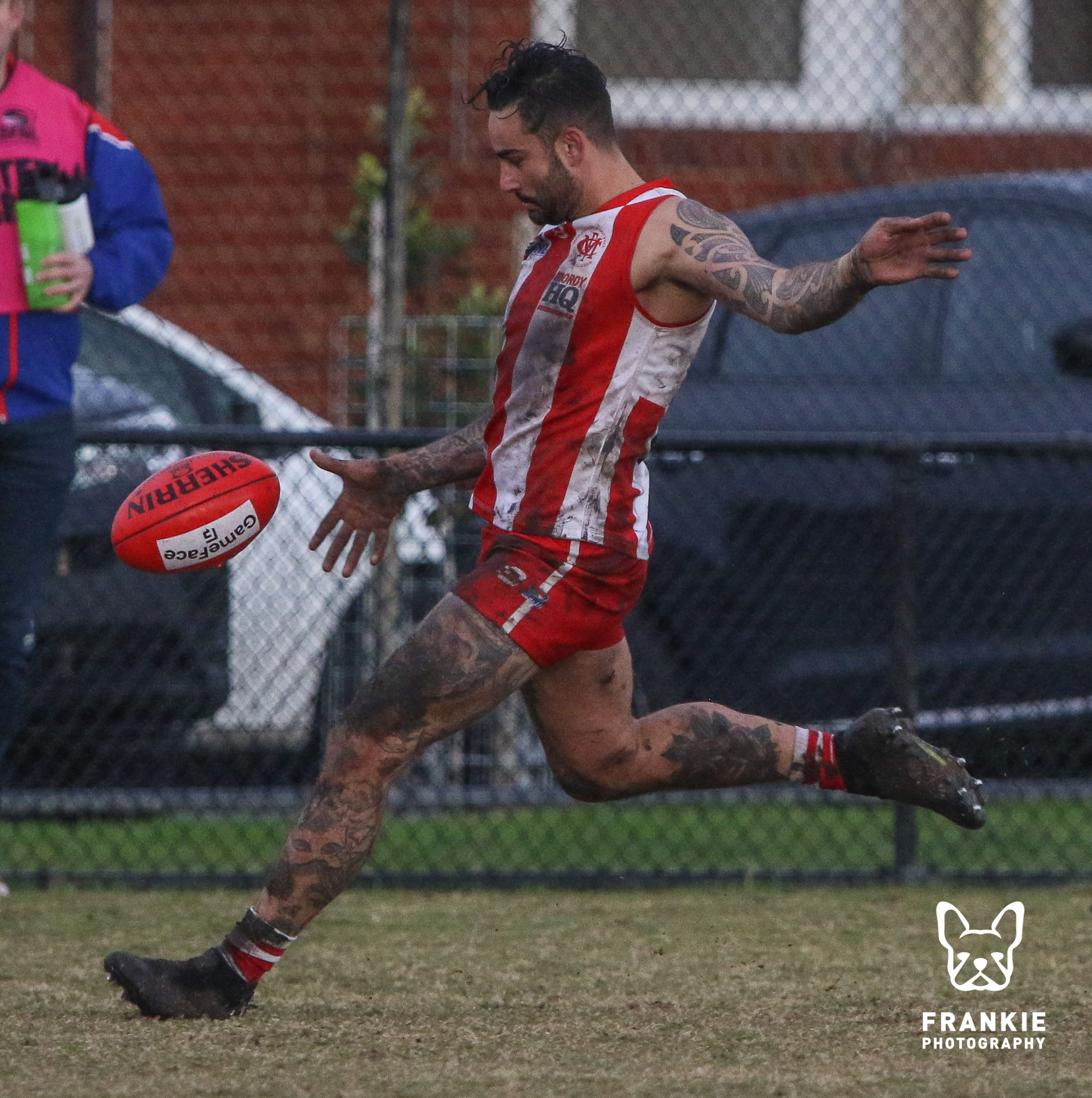 Mordialloc has leapfrogged into the top five after a scintillating second half lifted it over the top of Port Melbourne Colts at Ben Kavanagh Reserve.

The margin was just eight points at half time, before the Bloods piled on eight goals to two in the second half to run out 52-point winners.

James Morris had his highest scoring output since round two with four goals, while Justin Summons was best afield.

East Malvern made it three wins from its last four games with a 24-point win against Bentleigh at Dunlop Reserve on Saturday.

After a tight opening quarter, the Panthers sprinted away to lead by 41 points at the final break, with Mackenzie Bristow bagging four goals as one of the hosts’ best.

In the battle of the Dogs, Highett kicked the first two goals of the game, but from there it was all St Pauls with Nick Halliday and Brendan Dawes starring alongside Muller.

Cheltenham has outlasted a gallant Oakleigh District’s outfit at Jack Barker Oval, booting four goals to one behind in the final term to win by 37 points.

The Rosellas led by just nine points going into the final term before surging home, with Dylan Weickhardt and Charlie Kelso starring.

Dingley has overcome an improving St Kilda City outfit by just nine points at Souter Oval, in what was an entertaining game of footy.

The Saints had the better of the Dingoes in the first half, leading by 11 points at half time, before the experience of the hosts shone through in the second half.

Danny Ades and Lucas Walmsley were Dingley’s best while Aaron Purvis stood out for the Saints.

East Brighton has moved up into sixth spot on the ladder following a narrow 13-point win against Skye at Carrum Downs Recreation Reserve.

The two sides could barely be separated throughout the afternoon, but the Vampires’ stood strong when the Bombers made a desperate attempt to comeback in the fourth term.

Brad Wescombe was outstanding for the victors with four goals.

Springvale Districts has escaped a possible upset with a stirring final quarter to overcome a gallant Caulfield side by 27 points at Koornang Park Reserve.

The Districts trailed by 12 points at the final change, before slamming home eight goals to two in the last term, with Matt Wetering leading the charge, tallying five goals for the match – including four in the final stanza.

Murrumbeena has produced possibly its best performance of the season to run away 35-point winners against Keysborough at Murrumbeena Park.

The Beena were simply too strong for their rivals leading at every change and rarely looking troubled, as star recruit Nick Brazil slammed home five goals while Matt Lello was best on ground.

Hampton has produced the upset of the round, stunning Doveton Eagles by 11 points at the Toolbox on Saturday.

It was the win the Hammers needed to launch themselves into a genuine finals run and they did it with aplomb as star Mark Devereaux put his team on his back with a three-goal best on ground effort.

Jarrod O’Neill was pivotal for the Eagles with six goals.

Heatherton has come away with a remarkable victory, it's second for the season, against Chelsea Heights at Ross Street Reserve, winning by eight points despite not registering a major in the second half.

The Tunners booted seven goals to two in the first half and were steadfast defensively in the second half as the goals dried up.

Jacob Flannery and Ben Clark-Henry were named Heatherton's best in the result.

Ashwood has caused the upset of the round in division three, defeating Endeavour Hills by seven points in a thrilling encounter at Essex Heights Reserve.

The Magpies led throughout the afternoon, but had hearts in their mouths when the Falcons booted the last two goals of the game, before holding on for the win.

Pat Carroll led the way for the victors with three goals, while Brett Figas was named best on ground.

Another day, another victory for Hampton Park as the Redbacks won their 10th straight game to start the season, beating Cerberus by 159 points.

The ladder leaders finished the game with six multiple goalkickers, led by Peter Dye with six, while Sean Winsall and Ryan Pearson were best on ground.

The Clays led by 11 points at the half time interval, before Black Rock booted two goals to one behind in the third to lead by four points, before the visitors surged home for the win.

Xavier Ewington played his best game for the Rockers for the season, booting five goals.

Lyndhurst climbed back into top spot on the ladder with a percentage boosting 104-point victory against Lyndale at Barry Powell Reserve.

The Lightning never trailed throughout the game, booting 12 goals in the second half with David Ford and Hamish Browning combining for eight majors.

The Lions cruised to their seventh win of the season, with a six-goal third term showing how good they can be, with Brandon Bird starring with a seven-goal best afield haul.

A seven-goal final term has lifted Frankston Dolphins past Moorabbin to the tune of 41 points at Overport Park on Saturday.

The Dolphins led by just five points in a close encounter to three quarter time, before piling on seven goals to one in the final term.

Sam Turner was best on ground for the victors, while Lachlan Fielding booted five goals.

Hallam has climbed back into the top four with a decisive 69-point victory against Dandenong at Hallam Reserve in round 10.

The Redlegs were competitive against the Hawks for much of the first half, before the hosts sailed home in the second half, with Jack Sharlassian booted four majors in a best on ground performance.