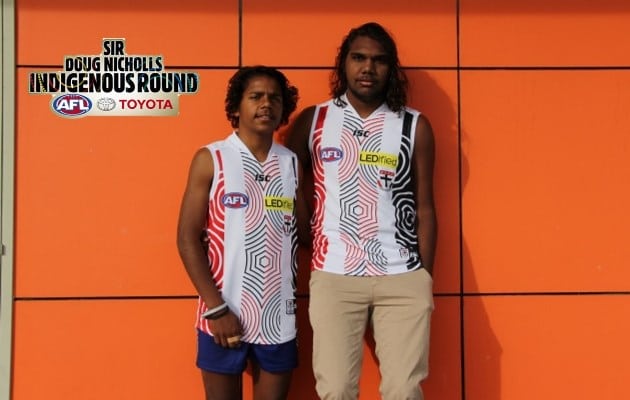 AFL clubs have been doing it for years, but for the first time a Southern Football Netball League club will take to the field in a special commemorative jumper in recognition of indigenous culture.

St Kilda City will on Saturday run out onto the Peanut Farm wearing St Kilda’s 2015 AFL Indigenous Round guernsey for their clash against Mordialloc as part of this weekend’s Sir Doug Nicholls Indigenous Round celebrations.

The initiative was instigated by first-year club president Nick Porter, who is a trustee of indigenous youth exchange program the Kajji Foundation, and has been supported by the St Kilda Football Club, who have been keen to engage with indigenous programs at a local community level.

The guernsey was designed by indigenous artist Marcus Lee and represents the six clans of the Boonwurrung, the traditional custodians of the land around the St Kilda and Port Phillip area.

St Kilda City has a number of indigenous players on its list, including talented youngsters Jesse Firebrace and Kane Plummer.

Firebrace said he was thrilled to don a guernsey that recognises and celebrates his people and their storied history and culture.

“I hope I can do the jumper proud, do the club proud and I feel blessed that I have the opportunity to wear it.”

Firebrace is a well-spoken 16-year-old that is immensely proud of his Aboriginal heritage. He is a part of the Yorta Yorta people and spent his early years in Shepparton before moving to Melbourne at age 12.

And he is fast become a role model and a leader in the indigenous community through his involvement in the Laguntas Program, which supports cultural strengthening and leadership and provides education, training and employment pathways through the Korin Gamadji Institute (KGI).

“I pride myself in my culture, it’s something I’m really deep in love with and something I really cherish,” Firebrace said.

“I like to be known as an Indigenous Australian, break stereotypes and be proud of who I am.”

A supremely talented footballer, Firebrace has progressed through the ranks at St Kilda City’s juniors, starting in the Under 12s, before this year progressing to the senior club’s Under 19 team alongside Plummer.

The dashing defender has shown that a diminutive stature is no disadvantage, dominating against players several years his senior and more than twice his size.

Last Saturday Firebrace won the medal as Southern’s best afield in their Under 18 Interleague clash with Ellinbank after a dazzling display.

He idolises Cyril Rioli and possess many of the same traits as the Hawthorn champ, including blistering speed, slick evasiveness and sublime skills.

He also wants to follow Junior Boy into the big league, but is circumspect about his prospects.

“Obviously I want to play AFL. That’s the ultimate dream, but if that’s not the case then I’m more willing to push to (reach) my best potential and be the greatest player I can be,” he revealed.

The Lagutas program also provides football talent pathways in conjunction with the Richmond Football Club, which affords Firebrace the opportunity to take progress his footy to the highest level he can reach.

But regardless of where his football takes him, Firebrace has already left a profound mark on his current club, and one that will likely remain long after his playing days at St Kilda City have come to an end.

Firebrace and his younger brother Jake have been immortalised on a mural painted on a wall of the Peanut Farm pavilion by celebrated international street artist Adnate.

The mural recreates St Kilda AFL star Nicky Winmar’s famous stand against racial vilification, where he lifted his jumper and pointed to his skin in defiance of racial taunts from the Victoria Park crowd in 1993.

The mural also depicts Bunjil the eagle, the creator spirit for the local Boonwurrung people. The indigenous mural at the Peanut Farm featuring the Firebrace boys, Jesse and Jake.[/caption]

Plummer, meanwhile, hails from Tennant Creek in the Northern Territory and has joined the Saints through Porter’s involvement in the Kajji Foundation, which derives its name from the word for guide (Kajji Nyirin Jurrah) in the native language of the Tennant Creek area.

The aim of the Foundation is to bring talented youngsters from the remote region to the big smoke of Melbourne to further develop their proficiency in their chosen sport, trade or artistic pursuit through scholarships at elite local schools including Christian Brothers College and St Michael’s Grammar.

Porter said Plummer’s inclusion into the program came at the request of his mother after the success his elder brother had in the program.

“Kane’s older brother, Aiden, has been in the Kajji Foundation and had been really successful,” Porter said.

(Aiden) was a really good news story for us… he came down here, not so much necessarily because he was talented at football, but he need a break from Tennant Creek.

“He came down here and started learning a little bit more about football. He ended up played state level football and winning the under 18s premiership for the school boys competition in NT Thunder.

“His mum was so happy about it so she wanted the younger boy, Kane, to come along.”

Now Plummer and Firebrace are preparing for this year’s Doug Nicholls Indigenous Round and are looking forward to representing their people and celebrating their culture together out on the Peanut Farm.

Firebrace said it was great that the Indigenous Round concept has now been embraced at a local level, giving community footballers the same opportunity to showcase their indigenous heritage as the AFL stars.

“It’s really intriguing how it’s gone from like a national scale, to not only a regional scale but also a local level and it’s really good that they recognise us,” he said.

“I really enjoy playing indigenous round because it proves the diversity of the game of AFL.

“It’s an opportunity to express my culture, not only off field, but also on field… I’m really looking forward to it.”

The Boonwurrung Foundation will facilitate a Welcome to Country and a tradition smoking ceremony before the St Kilda City v Mordialloc Division 1 Senior match this Saturday.