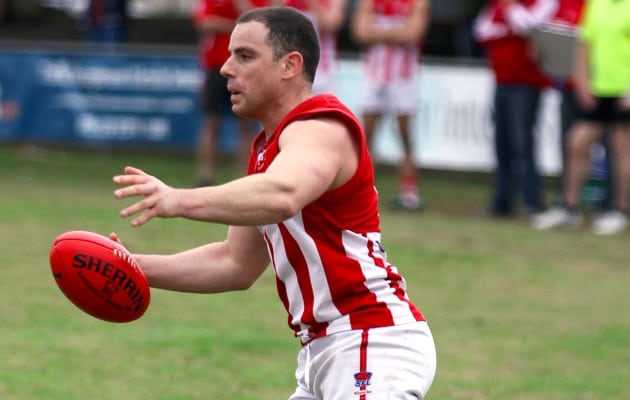 Round 15 has come and gone with St Pauls edging closer to securing the minor premiership, and the race for 2nd spot only just beginning.

East Brighton kept their winning streak alive with a 99 point demolition of East Malvern at Hurlingham Park. The Vampires kicked 16 goals and had 29 scoring shots to 4 after quarter time to complete the victory and move within percentage of second placed Dingley. The Vampire midfield and half forward brigade dominated play and led the team in scoring. Half forward Dan Reid was best on ground with 7 goals for the Vamps.

St Pauls completed a come from behind win against Dingley to just about secure the minor premiership for 2013. The Doggies trailed by 17 points going into the final quarter but kicked 3.7 and held Dingley scoreless for the quarter to record an 8 point victory. St Pauls midfielders Jarryd Allan and Jay Bruno led the way for the Doggies and were among the best.

An 8-goal second quarter helped Clayton keep their finals hopes alive as they defeated Heatherton at Ross Street Reserve. The Clays were challenged early by the Tonners but prevailed in what turned out to be a comfortable win. The win puts Clayton in 6th spot, a game and percentage behind Cheltenham in 5th. Paul Tsoucalas led the way with 4 goals for Clayton.

Cheltenham held onto 5th spot on the ladder with a win against Highett in Round 15, despite giving up 7 goals in the final quarter of play. The game seemed done and dusted at 3 quarter time before the Dogs played with a renewed sense of spirit kicking 7 goals to 1 in the 4th quarter. Despite the effort, the Dogs fell to the Rosellas by 22 points. Chris Graham had 5 for Cheltenham while Tom Brown kicked 6 for Highett.

Well, Skye’s finals dream lives on, with a stirring victory at home against the ladder leaders in Oakleigh District. Murrumbeena managed to get some valuable percentage against the Caulfield Bears, and Bentleigh moves back onto the top of the ladder this week.  So much for my effort in predicting that the 5 was set. All Skye has to do is win the last 3 games and they play finals; it's as simple as that. This week is their chance. If they can beat Murrumbeena at Murrumbeena, they WILL be in the 5 as they should beat Moorabbin at home in Round 17, and if they can beat Bentleigh away in the last Round, they’re in the Finals! That being said, if they get beaten this week, game over! Let’s hope for the sake of interest and intrigue that Skye didn’t play their Grand Final last week, and have more in the tank to give the Final 5 a real shake!

Hampton, Moorabbin and Caulfield are now all safe from relegation, leaving South Yarra to return to Division 3 next season. Three wins and weak percentage off 9th spot and their last 3 games against Springvale Districts, Hampton and Mordialloc spells gloom and doom for the Lions. But they are capable of recruiting well and they have rebounded from worse situations before (i.e. going into recession and resurrecting themselves to win the Division 3 flag). I look forward to them becoming competitive again.

Black Rock has all but dashed Sandown’s finals hopes after pulling off a gritty nine-point win at Edinburgh Reserve. In the upset of the round, the Jets booted five goals in the third quarter to give themselves what proved to be a decisive advantage. Steven Baranski and Brad Meehan were the standouts for Black Rock.

With the Cobras’ loss, Ashwood looks set to claim the final spot in the five after knocking off fellow finals aspirant Lyndale at Essex Heights Reserve. It looked like a case of how far ahead the Pumas could get early on as the visitors piled on five unanswered goals in the opening stanza. But the Magpies clicked into gear after the first change and clawed their way back into it before sealing a 21-point win with a six-goal-to-one final term. Josh Stanton was again one of Ashwood’s best.

At Mayfield Reserve, Dandenong pipped Mount Waverley by just four points. The Redlegs looked the goods holding the home side at bay for most of the afternoon. But the Mountain Lions mounted a huge challenge in the last quarter and very nearly pinched a remarkable win; however, with solid performances from Chris Tosin and David McKean, Dandenong held on and got home by less than a kick. Sean Rickard was Mount Waverley’s best.

The Doveton juggernaut rolled on, this week thumping Carrum Patterson Lakes by 10 goals at Roy Dore Reserve. The ruthless Eagles led from start to finish, restricting the Lions to just one goal for the first three quarters. Matthew O’Callaghan was a prolific ball-winner in Doveton’s midfield.

The last game saw Hallam register just its second win for the year over the hapless Endeavour Hills at Hallam Reserve. The game was largely decided by the first change, with the Hawks piling on 6.8 to 0.0 in a devastating display. The Falcons fought back in the second term, but were powerless to stop the Hawks running out winners by 50 points with Sean Gaitely best afield.

Dingley erased memories of the previous week’s loss to Carrum Patterson Lakes with a come-from-behind win over St Pauls at McKinnon Reserve. After a good start by the Doggies, the Dingos clawed their way back into it before four unanswered goals in the final term saw them home. Kane Davidson, John Mentiplay and Vincent Arena booted three goals each for Dingley.

At the Toolbox, Hampton scored a big win over an undermanned Murrumbeena outfit. Although Beena were in the hunt at the long break, they ran out of puff in the second half and the home side capitalised on the back of a best afield performance from Tom Coulson.

Down at Roy Dore Reserve, Carrum Patterson Lakes were outclassed by Bentleigh. Although the Demons had a match winning advantage by halftime, CPL fought hard and got better as the game wore on. Two goals from Jack Gadakis helped him secure best on ground honours for the winners.

The final game saw Skye easily account for Chelsea Heights down at Beazley Reserve. Although the Heighters fought hard in the opening stanza, the Bombers had their measure after that and ran out comfortable winners. Dylan De Prazer starred for Skye while teammate Ryan McConville finished with six goals.