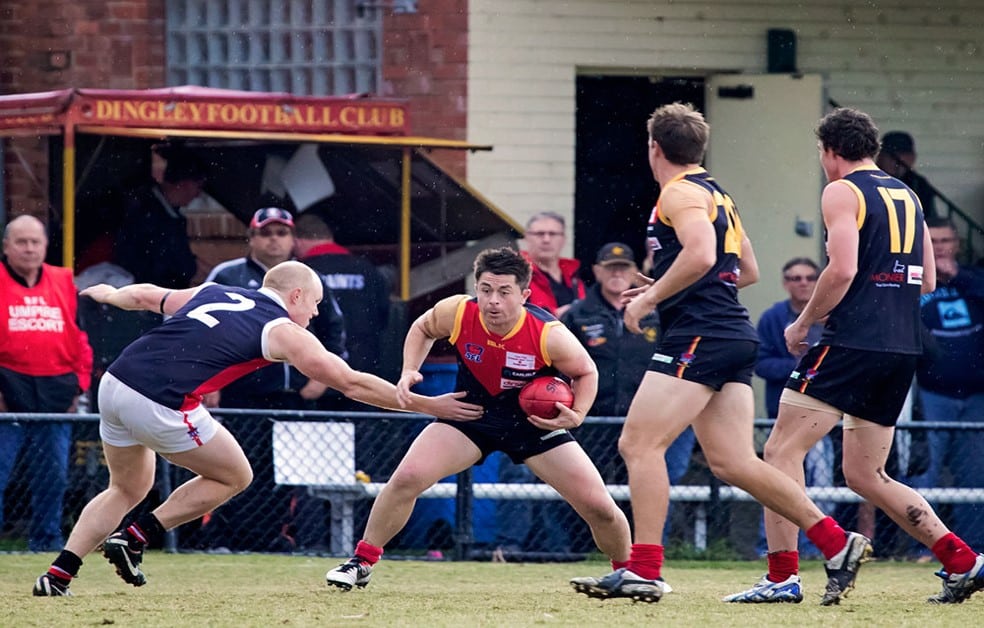 After a bumper weekend of Round One action, Round Two features five ripping games back on the traditional Saturday arvo timeslot.

Chelsea Heights V East Malvern – Beazley Reserve
While I expected the Panthers to improve this season, I was surprised by the way they systematically dismantled a quality team in St Pauls. Plenty to like about this East Malvern side, but I’d need to see a couple more wins like those before I consider them a genuine flag chance. Similarly, I’m not going to write off the Heighters’ season based on one wretched game. However, there is a still a bit of a gap between these two sides and the Panthers should get the points.

Bentleigh V East Brighton – Bentleigh Reserve
No doubt an opportunity went begging for Bentleigh last Saturday as they were never out of the contest, however, they can make a big statement here with a strong performance against the competition’s benchmark. Although at times they appeared slightly underdone, the Vampires played better footy last week than the 44-point loss suggested and I reckon they will win comfortably here.

Cheltenham V Mordialloc – Jack Barker Oval
A massive first-up victory to the Division One new-comers showed that they are up to the standard, but a much bigger challenge in Cheltenham awaits this week. The Rosellas’ tall timber were impressive against City – Chris Graham and Pat Nicholls nailed three goals each – and if they bring the same endeavour on Saturday they will stretch the Bloods’ defence and help their side kick a winning score.

St Pauls V Clayton – McKinnon Reserve
The performances of their new recruits were encouraging enough to suggest I may have got it wrong about Clayton last week. It was a very gritty win from them and there could be a few more of those this year. However it’s been a while since St Paul’s copped a hammering like the one East Malvern dished out and I’m tipping them to bounce back with a win at home this week.

Dingley V St Kilda City – Souter Oval
The Dingoes showed they can cover the loss of reigning Ellis Medallist Luke Walmsley as the fast-paced, run-and-gun style of play that got them through to last year’s premiership decider was again perfectly executed. Dingley are always hard to beat at home and will easily account for St Kilda City.

Round two gets underway with some quality match ups.

Skye vs Heatherton (Carrum Downs Recreation Reserve)
Both sides will be looking to bounce back after disappointing round one losses. The Bombers were strong in the second half against Oakleigh so look for them to bring that form into this encounter. Heatherton struggled after quarter time against Caulfield and need to put in more consistent effort. Skye to register their first win of the season in this one.

Keysborough vs Murrumbeena (Keysborough Reserve)
Keysborough got their SFNL career off to a good start with a convincing win against Doveton in round one. Murrumbeena were great defensively in their match against Hampton but poor kicking in front of goal may have cost them a victory. Both sides will be keen to get a win in this matchup but the newcomers may be slightly too strong for an improving Murrumbeena.

Caulfield vs Doveton Eagles (Koornang Park Reserve)
The Bears looked good in their dominant win against Heatherton away from home in round one, while Doveton faded in the last quarter in their loss to Keysborough. These two sides provided some good competitive games last season so expect the same again this weekend. Should be a close game but I can’t go past the Bears who look like they will be up there again this season.

Hampton vs Highett (Peterson Street Reserve)
Hampton had a good win against Murrumbeena in round one but they weren’t entirely convincing. Highett fought hard all day in their loss to Springvale and will be looking to bounce back. Should be a great contest but I’m going to give Hampton the benefit of the doubt and say they will win this game in a close one, but don’t be surprised if Highett pull off an upset.

Springvale Districts vs Oakleigh District (Springvale Reserve)
Both teams got off to great starts with solid round one wins. Both sides also had new recruits who showed positive signs for the season to come. Two of those recruits are James Gough and Brody Hodic who may find themselves in close proximity to each other in this hotly contested matchup between two sides looking to make the finals after missing out in 2014. But for me, I think Oakleigh might be a little too good but again, don’t be surprised if Springvale make it two in a row.

Round 2 gives South Yarra a chance to get a win on the board when it hosts Endeavour Hills, but the Lions may have to wait a little longer as the confident Falcons should continue their positive start to 2015.

Black Rock is the away team against Dandenong, but the Jets will be too strong for the Redlegs.

Ashwood continues the trend, also travelling this week, but going in as commanding favourites against the developing Hallam side. The Hawks will be determined, but the Magpies’ class will prevail.

Lyndale is another team that should record a win away from home when it takes on the Southern Dragons.

Mount Waverley is playing at home against Moorabbin and this time there is unlikely to be any joy for the away team. If the Kangaroos are going to be competitive they will need to play at their best from early in the game. Perhaps the confidence they gained in the second half of their round 1 match will give them a shot, but it is not likely to be enough against the Mountain Lions.

The match of round 2 may well be the battle between Carrum Patterson Lakes and Sandown at Roy Dore Reserve. The Cobras will be desperate to bounce back after a first-up loss and this shapes as an intriguing contest, but it is too hard to tip against the might of the Lions, especially in their own den.