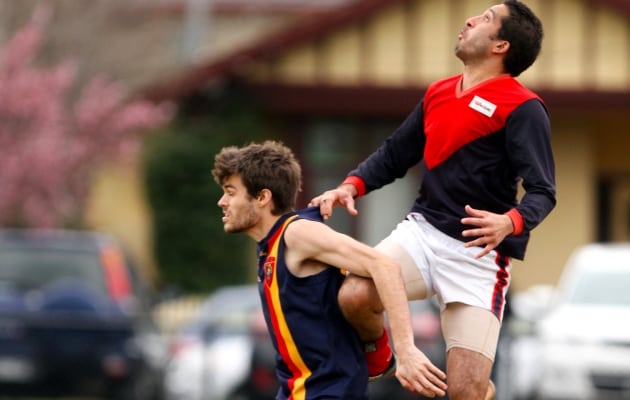 As the Home and Away season for 2013 finished up, a monumental battle for the final place in the top 5 took place.

East Malvern finished their comeback season on a high with a victory over Heatherton at Dunlop Reserve. Though the Tunners were within 9 points at half time, a 9 goal to 5 second half from East Malvern saw them come home with a bang. Club stalwarts Trent Hotton and Tom Delahunty were the best for the victors.

Chelsea Heights insured they would go into the finals on a winning streak defeating Cheltenham at Jack Barker Oval. The win was enough to knock the Rosellas out of the top 5. The Chelsea Heights midfield were just too good in the win and despite good play from Rosellas forward Chris Graham, the Heighters backline stood up when the game was on the line. Brad Gilder and Jayden Attard were best on ground.

East Brighton secured a top 2 spot on the ladder and their 12th straight victory after defeating Clayton at Meade Reserve. The loss for Clayton puts an end to their finals hopes after an encouraging start to the season. For the Vampires, the win was set up by strong play from both flanks. Tait Sabec and Nathan Stewart stood tall down back, while Mark Jamieson kicked 4 goals.

A last quarter comeback from Dingley helped them secure their first top 3 finish in Division 1 when they defeated St Kilda City at Souter Reserve. Though the Saints gave up a 26 point 3 quarter time lead, the loss hasn’t cost them a spot in the top 5 as they scraped in by percentage. For the Dingoes, Jackson Peet showed he will be one to watch during the finals with 3 goals against the Saints.

St Pauls will begin their finals campaign the best way possible after demolishing wooden spooners Highett at Turner Road Reserve. The victorious dogs kicked a league high 32 goals with Luke James kicking exactly half of them. His 16 goal haul is the most by any player in Division 1 this season. Andrew and Nick Gilbert also dominated for the Dogs as they prepare for a much deserved week off before starting their finals campaign.

Well Round 18 has been and gone and it has been a while but I managed to tip 5 winners! Bentleigh gets a well earned break, whilst Skye, Hampton, Moorabbin, Caulfield and South Yarra all had Mad Mondays this week, leaving us to ponder; which team will have their Mad Monday on 2nd September - Springvale Districts or Murrumbeena? My prediction later.

Skye put up a great effort to remain in the Top 5 and they lasted longer in the hunt than I thought they would. I believed they would have been out of contention a few weeks ago but they dug deep and kept us all guessing until the final round.

But one season finishes, another season begins...

Well that’s it folks! After 18 gruelling rounds of blood, sweat and tears, the Home and Away season has finally concluded.

The dominant Doveton has gone through the season undefeated after overpowering Mount Waverley in the top-of-the-table clash at Power Reserve. The Eagles were hot from the outset and had increased its lead to an insurmountable 41 points by the final change. But the Mountain Lions still had plenty left in the tank, booting six goals in the last quarter to trim the final deficit back to a respectable 24 points. Brett Hidgcock booted two goals in a best afield performance for Doveton, while Keaton Tribe was the standout for the visitors.

Lyndale needed a win to sneak into the top five, but unfortunately they couldn’t get the job done against Dandenong at Barry Powell Reserve. After a slow start, the Pumas clawed their way back into the contest and trailed by just nine points at the long break. But the Redlegs proved too good in the second half, running away to a convincing 29-point victory, with midfielder Matt Van Schajik booting two goals to claim best on ground honours. Brad Carroll kicked three majors in a sparkling display for the Pumas.

Carrum Patterson Lakes booked itself a double chance with a hard-fought 22-point win over Ashwood. The Lions had led for most of the day before the Magpies pinched the lead late in the third term. However the home side dug deep and kicked five of the last six goals to get over the line. Brett Wilson’s run of good form for Carrum Patterson Lakes continued while Matt McGinnes was solid for Ashwood.

Black Rock finished its season on a high, edging out Hallam in a high-scoring shootout at McDonald Reserve. Hallam took a nine point lead into half time, but the Jets came out all guns blazing in the third term, booting seven goals to two to turn the deficit into a 21-point advantage by the final change. The two sides traded goals in the final quarter with the Jets finishing 15 points to the good. Cory Durie again had the ball on a string for Black Rock, while Linden Fredericks starred for the Hawks.

The final game was a blowout and a disappointing end to a horror season for Endeavour Hills. Sandown were ruthless, opening up an unassailable lead by halftime before romping to a 132-point victory. The Cobras had a staggering 13 individual goalkickers, with Dwayne Doig’s three majors capping a sublime performance.

Clayton has finished its disappointing year in heartbreaking fashion, beaten by Hampton by just a solitary behind at Meade Reserve. The loss consigns the Clays to the wooden spoon; however, there are positives to build upon for next year, with ruckman/forward Jack Gavin playing his best game for the season which saw him awarded a Leader Shooting Star nomination. Toby Bredin was instrumental in the Hammers’ sixth win of the year.

Carrum Patterson Lakes nearly pulled off a stunning upset over the finals-bound Doggies at Roy Dore Reserve. The home side gained the ascendancy in the second term before pulling away to lead by 22 points at the final change. But St Pauls rallied, booting five unanswered goals to pinch a six-point win with Carl Herbstreit leading the resurgence. Connor Graham starred for CPL with five goals.

Over at the Den, Skye consolidated its double chance with a gritty win over Dingley. Just four points separated the two sides at three quarter time before the Bombers, led by another five-goal haul from spearhead Ryan McConville, took control of the match to run out 25-point winners.

The final game saw minor premiers Bentleigh cruise home against Chelsea Heights. The 103-point win was set up on the back of a seven-goal second term, with Liam Hogton-Hewish back to his best form.