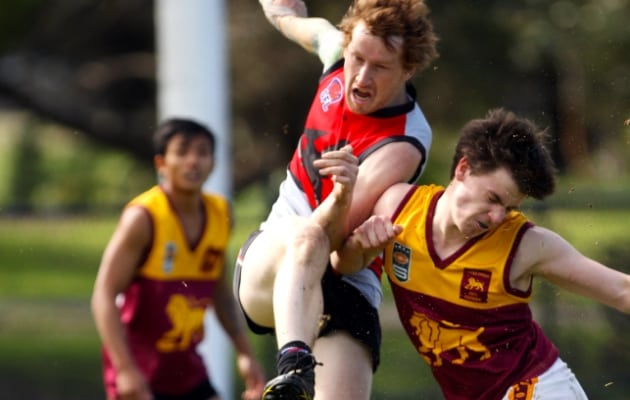 The last round of the season is upon us and with 4 of the top 5 positions filled, a fight for 5th is still taking place.

Though this doesn’t seem like an exciting game on paper, both East Malvern and Heatherton will be looking to end the season on a high so expect this to be a high scoring affair. Both clubs have staved off relegation so this could be a chance for a few younger guys to get an opportunity at senior level.

The first of 3 big clashes that will decide 5th spot on the ladder. The Rosellas have a slight edge playing at home and they will look to exploit that against a Chelsea Heights team who still have a chance at a top 3 finish. Expect this to be a close game. An upset could be on the cards.

A finals spot is an outside chance as Clayton take on the rampaging East Brighton at Meade Reserve. The Vampires are looking for their 12th straight victory and unless they rest a few key players, they should get the victory. Don’t expect Clayton to go out without a fight though.

Another really close match-up that will have an impact on the final ladder positions come September. Dingley take on St Kilda City in a game that neither team can afford to lose. A win secures Dingley’s first top 3 finish in Division 1 while a win for the Saints gets them back in the finals. Will be close.

The Dogs take on the Dogs in the final Home and Away game of 2013. With St Pauls already clinching the minor premiership, don’t be surprised if they take the opportunity to rest players for the finals. They should still be talented enough to win this game as Highett have struggled all season.

The biggest game of the season for Skye. Bentleigh won’t want to drop a game this close to finals, but they will retain the ladder leaders title even if they do get beaten here and will enjoy the week off before competing in the second semi-final. Skye don’t have that luxury. Win and they play finals, lose and it’s mothballs; it’s as simple as that. Murrumbeena and Springvale Districts will be sweating on the outcome here. I can’t help but admire the way Skye has finished off the season but I think Bentleigh will win this.

South Yarra will be glad when the final siren blows this week so they can pack up, have a break and then get stuck into rebuilding. Mordialloc will win this, no doubt about it.

Murrumbeena need to win this game and win big. If Skye wins this week, Murrumbeena may miss out on finals by percentage, as they have the worst percentage of the top 6 sides. I think Murrumbeena will win, but Hampton will do everything in their power to stay close and prevent Murrumbeena from increasing their poor percentage.

Like Murrumbeena, Springvale Districts need to win this and also need a percentage booster. Caulfield has had a long season and will have trouble staying in touch with Springvale this week. Springvale will be hoping for a Bentleigh victory over Skye, but I think if Skye does win, Springvale should finish fifth as they have an easier job than Murrumbeena in boosting their percentage.

Oakleigh have had problems with the smaller grounds this year, and Moorabbin troubled them earlier in the season at Oakleigh. Add to this the loss last week to Murrumbeena and things don’t look too good for the District. Moorabbin are capable of causing an upset here; if they do there will be lots of soul searching going on at Oakleigh, as they will be going in to the Finals in the worst form of all the finalists. I’ll give Oakleigh the benefit of the doubt and think they’ll bounce back here and defeat Moorabbin, getting back on track for a hit at the flag!

With one game remaining in the home and away season there is still much to play for. The composition of the top five is far from complete, while several teams are vying for the double chance.

The equation for the fifth-placed Ashwood is simple: beat Carrum Patterson Lakes and they make the finals. And this is no easy feat down at Roy Dore Reserve, a venue the Lions play particularly well. Conversely, a win for the home side will all but guarantee them a double chance. On the form they are in, the Lions should get over the line comfortably.

If Ashwood lose, Lyndale have a chance to secure a finals berth if they defeat Dandenong at Barry Powell Reserve. This would be a fairytale turnaround for the club that failed to win a match in 2012. But with the Redlegs in contention for a top three finish, it would take a herculean effort from the Pumas to cause an upset. With so much at stake for both sides, this will be a close one, but I think Dandenong will just sneak home.

Meanwhile at Power Reserve, Doveton clashes with Mount Waverley. This will be a huge game between the sides that have occupied the top two positions on the ladder since Round 2. A loss for the Mountain Lions will have them in danger of missing the double chance, which seemed almost unfathomable earlier in the year. But it’s hard to see any side toppling the Eagles and they should win convincingly.

The improving Black Rock is in some terrific form as they take on Hallam at McDonald Reserve. In contrast, the only side the Hawks have beaten is the winless Endeavour Hills. On that basis, the Jets will finish 2013 on a high and win easily.

The last game sees Endeavour Hills host Sandown at Barry Simon Reserve. The Cobras have lost their last three games, and with the Falcons being competitive in recent weeks they are good a chance to cause an upset. This could be another tight finish, but Sandown should get the points.

Kicking off Round 18 is the big clash between Dingley and Skye at the Den. This is a must-win for Dingley if they are to move to third and secure the double chance. The Bombers, however, need to build momentum if they want to challenge for the flag and should get the job done here.

Minor premiers Bentleigh take on Chelsea Heights at Bentleigh Reserve. After a huge couple of weeks, the Demons are now looking like short-priced favourites for the flag. The Heighters will be keen to finish their year off positively, but knocking off Bentleigh will prove too tough a task.

Down the other end of the ladder, Clayton will be keen to defeat Hampton at Meade Reserve and avoid the wooden spoon. Both sides are coming off heavy defeats, but I think the Hammers have been the better side for most of the year and should get the points.

The final game sees Carrum Patterson Lakes host St Pauls at Roy Dore Reserve. The Doggies need to continue their good form into their impending finals campaign and will be too good for CPL here.