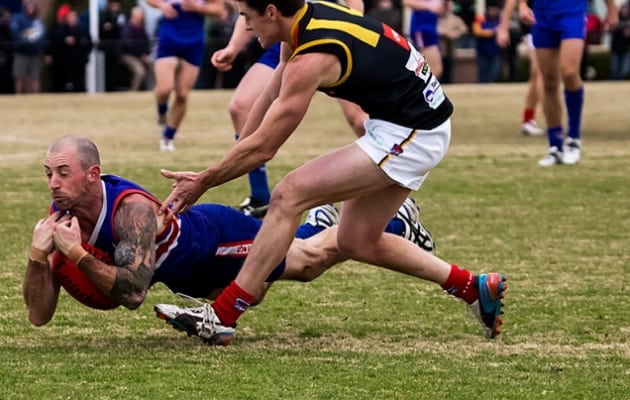 Three weeks out from the finals and a ladder changing blockbuster is the highlight of Round 16.

East Malvern take on Chelsea Heights at Dunlop Reserve in Round 16. Although it seems like a one sided affair, the Heighters need a big win in order to gain percentage, which will play a factor in deciding the final ladder positions come Round 18. Expect Chelsea Heights to come out firing.

An important game for both clubs as they try to secure the first and 5th spots on the ladder. To put it simply, a win for St Pauls and they all but secure the minor premiership. A win for Cheltenham and they keep their advantage over Clayton in the fight for 5th. Expect a hard fought game.

Though Highett have showed glimpses of how good they could be, they have struggled to put together a four quarter effort. Visiting a hungry Clayton fighting for a finals spot isn’t going to help them in that area. Expect Clayton to win and win big.

It’s all or nothing now for St Kilda City as they put everything on the line against Heatherton this Saturday. A loss and they are officially out of finals contention. A win and they still have a glimmer of hope. The Saints are used to playing in big games and it doesn’t get any bigger than this at this stage of the season.

Though there are three rounds to go, I’m predicting that the winner of this game will finish in 2nd spot on the ladder. East Brighton has been the best team for the last two months and will go in as favourites despite being behind Dingley on the ladder. But don’t count out the Dingoes as they fight for their first top three finish in Division 1. Will be an absolute ripper game.

1st plays 3rd in what should be a very interesting affair. If Mordialloc wins, they could slip into top position; if Bentleigh wins, then they should remain on top. Both teams had modest wins against teams at the other end of the ladder last week; Bentleigh missing an opportunity of belting South Yarra, whilst Mordialloc had a bit of trouble against Moorabbin. Neither senior coach will be happy with those performances and will be keen for better efforts this week.

Psychological edge is the key this week as both sides seem destined to play each other in September, and anything that can give them an edge helps; winning this week will definitely help come finals time!

I’m tipping Bentleigh this week at home in what should be an entertaining affair as both teams return to form and prepare for finals action.

Last time these two met, Hampton were victors. This week Oakleigh District gets a chance for revenge and will be hurting after losing against Skye last week. Oakleigh can’t afford any more blips on their radar as they plan for Division 1 promotion at the end of the season. Lose this and they can just about kiss their premiership hopes good-bye. In saying that, I expect the District to bounce back hard against the Hammers, and should have no problems this week.

Springvale have slipped to 5th spot on the ladder and will be keen to increase their percentage to put themselves in a higher ladder position. Perfect opportunity this week with South Yarra traveling to Newcomen Reserve. South Yarra should be keen to put in a better effort in the last three rounds to give them some belief that their stay in Division 3 may be short lived. Springvale will be keen to get into some form to carry into the finals. Springvale Districts to win easily.

In a game that has no bearing on finals or relegation, these two teams will also be keen to finish the season showing signs to their supporters that big pre-seasons and astute recruiting could see them have better seasons next year. Moorabbin seem to have the wood on the Bears in recent years and I can’t see that changing this week, especially at Moorabbin.

Last game on the fixture and most important match of the round. As I stated previously, if Skye wins they slip into the 5. If Murrumbeena win, Skye’s finals dream are all but over. Also as stated last week, Skye’s best is capable of winning this, and Murrumbeena has not had as consistent a year as they would have liked, but their best is pretty good too. With everything to win and also everything to lose, I see a hard hitting, close tussle, but I think Murrumbeena should hold sway at the end of the day. The margin is not important; 1 point works just as well as 100 in the end, and winning is everything here.

It’s now Round 16, and with just three games remaining in the home and away season the final five is almost set. Sandown and Lyndale are still mathematical chances to make it, but sitting two wins out means they cannot afford to drop another game or it’s just about curtains for season 2013.

Sandown has a tough assignment this week – the in-form Dandenong at Greaves Reserve. The Redlegs’ win over the second-placed Mount Waverley was its 10th victory of the year and they look like they will be going deep into September. It’s do-or-die for the Cobras, but unfortunately, I reckon Dandenong will be too good on the form they are in and will get the job done at home.

Lyndale, on the other hand, have it a bit easier than Sandown this week as they take on the lowly Hallam at Barry Powell Reserve. Granted, the Hawks looked good as they dismantled Endeavour Hills last week, but overall it has been a very disappointing year for them. Lyndale’s percentage will do it no favours as it tries to sneak into the five and they will need a big win to try to boost it. The Pumas are the better side, so I should suspect that they will get home without too many worries.

Thankfully for Lyndale and Sandown, Ashwood plays the undefeated Doveton at Power Reserve. The undefeated Eagles look a class above the rest in Division 3 and should win this pretty easily. The aim for Ashwood here is to keep the final margin respectable so they can maintain the percentage buffer they currently hold over Lyndale.

The next game sees Black Rock play host to Carrum Patterson Lakes at McDonald Reserve. The Jets, although never in finals contention, are finishing off the season in tremendous style. They are in great form and have claimed a couple of big scalps in the last few weeks. But the Lions are shaping as a flag contender and they should get the points here.

Finally at Barry Simon Reserve, Endeavour Hills takes on Mount Waverley. The Falcons have had the year from hell, and although the Mountain Lions have been in ordinary form of late, they will win this by plenty.

This week sees Bentleigh taking on St Pauls at Bentleigh Reserve. St Pauls were disappointing at home last week, while Bentleigh have been tremendous all season, losing just the once. They are firming for the flag every week and should win this quite convincingly.

Down at Meade Reserve, Clayton hosts Carrum Patterson Lakes. CPL has been much improved in the last couple of weeks, but fresh off the bye I’m tipping the Clays will win their second game of the year.

Fresh off a big win, Hampton travels to the Den to face the Dingoes. Dingley have been a bit inconsistent this season, while the Hammers have been much improved over the last few weeks. I reckon this will be a close one, but the Dingoes will get home just.

The final game sees Murrumbeena and Chelsea Heights clash at Murrumbeena Park. Beena have struggled for numbers in recent weeks, but they still have a fair bit of talent in their side. In contrast, the Heighters have been struggling for form of late and although they need a win here to keep their finals hopes alive, I think Murrumbeena will take the spoils.