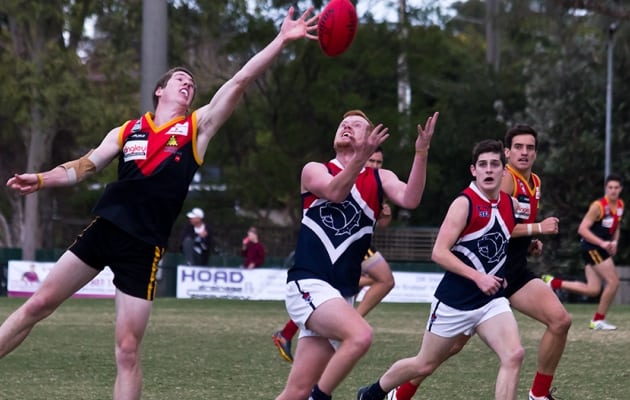 Round 13 is a huge round in terms of ladder positions and we could see a new team enter the top 3.

East Malvern host the Clays who are itching for a win to get themselves back into finals contention. Last time these two teams played it took a big final quarter for Clayton to get the 4 points. To use a common AFL cliché, this is an 8 point game for the Clays. Could be an upset though.

Another must-win game for the Saints as they could see themselves back in the top 5 if results fall their way. They should get a percentage boosting win against Highett, who have shown glimpses throughout the season but have been unable to put together a 4 quarter performance.

The Vampire train keeps rolling along as they face Heatherton at Ross Street Reserve in Round 13. A win here could see them sneak into the top 3 if results fall their way. But don’t count out Heatherton - this time last year the Tonners shocked the SFL by knocking off the Vamps by 16 points. That said, I don’t expect lightning to strike twice.

Neither team has been playing their best football the last month but look for that to change when 3rd hosts 1st in a must-win clash for both sides. A loss for either team and they could see themselves move down the ladder. Gonna be a ripper game and a close one!

The Rosellas have gotten back to their winning ways the last couple of weeks but unfortunately for them they run into a Dingley side who are in just as good form. A must-win clash for both sides in terms of their finals aspirations. Going to be another battle for the ages.

This week's match of the day in Division 2. First and second on the ladder with Mordialloc boasting a huge percentage, the winner of this game gets to hold top spot outright, one game ahead of the other. Oakleigh has dropped a couple of certainties so far and could have been a couple of games clear on top. That being said, we are into the final part of the season and Oakleigh will be trying to ensure that doesn’t happen again. This game however is no certainty for either side. Mordialloc hasn’t done too much wrong this season and I think they will have all the answers this week (at least) and should win in a thriller.

Bentleigh should kill off Hampton’s finals aspirations this week. Bentleigh, like Oakleigh District, have dropped a couple of certainties this season, and will be keen to eliminate these brain fades for the rest of the year. A big win here should see them on their way. Hampton will have a go but I don’t think they can win this week.

South Yarra’s season is not one they want to remember and this week they come across Murrumbeena, shock losers last week and in desperate need of a percentage boosting win. This could be ugly. Murrumbeena need this too much and I’m sure they’ll be primed to near perfection this week.

Two years ago, Caulfield caused the upset of the season, winning their only game for the season against one of the flag fancies at the time, Skye. Skye are not flag fancies this time however, but are desperate for finals action. A loss here would just about kill that dream and I think they will be too good for the Bears this week. I expect Caulfield to put in a spirited effort though, but I can’t see them winning this week.

I thought last week's game killed off Moorabbin's finals dream for this year. If I was wrong then, this week will definitely kill that dream because Springvale Districts, especially at home, look like they mean business, especially after last week's victory over Murrumbeena away. I expect Moorabbin to put up a decent fight as they have all year, and may even give Springy a fright at some stage, but Springvale will win.

Round 13 is shaping to be a tipsters nightmare, with a few evenly matched teams set to face off in a couple of riveting contests.

The first of these potentially close games is between Ashwood and Dandenong at Essex Heights Reserve. The Magpies, level on points with Sandown and Lyndale, are locked in a three-way fight for the last spot in the five. In the context of their season, every win is crucial, and with so much on the line, an upset here is a distinct possibility. However, the Redlegs have been terrific so far this season, and although I expect them to win, I reckon this game could go down to the wire.

Sandown currently holds that all-important fifth spot after last week’s win, but come up against the might of Doveton at Power Reserve. The Eagles have been so impressive this season I like their chances of finishing the home and away season undefeated. The Cobras will make a very good contest of this match, but Doveton will be too strong at home.

Lyndale’s season has had its ups and downs, but it has been a vast improvement on their 2012 campaign. They travel down to McDonald Reserve to play Black Rock, who are coming off back-to-back wins for the first time this year. Although they have struggled at times this year, they have started to play some good footy and although they can’t make the finals, they can help determine which other sides can. The Pumas will probably be starting this game as firm favourites, but I’m tipping the Jets to pull off an upset on home soil.

Carrum Patterson Lakes would still be ruing the one that got away against Dandenong. As a result, I reckon they will come out firing at Roy Dore Reserve this week and give the winless Endeavour Hills a bit of a touch up.

The final game sees Hallam take on Mount Waverley at Hallam Reserve. The Mountain Lions were very good last round and seem to be getting back into form at the right time. Unfortunately for the Hawks, I think this could be another heavy defeat for them.

In this week’s matches St Pauls travels down to Beazley Reserve to play Chelsea Heights. This is a very important match in the context of the season, as a win here will just about seal St Pauls’ place in the finals, while a victory for the Heighters will keep their finals hopes alive. I think St Pauls have what it takes to win this one.

Over at the Den, Dingley hosts Bentleigh. This is shaping to be a very good contest between two very good sides. Although the Dingoes play Souter Oval exceptionally well, the ladder leaders are in too good form for me not to tip them.

Skye takes on Carrum Patterson Lakes at the Hangar. The Bombers looked in excellent touch last week and I reckon they will get the job done here.

The final game sees Murrumbeena clash with Clayton at Murrumbeena Park. The Clays have shown gradual improvement throughout the year, but Beena are a terrific side and will go deep into the finals. Beena should get the points at home.