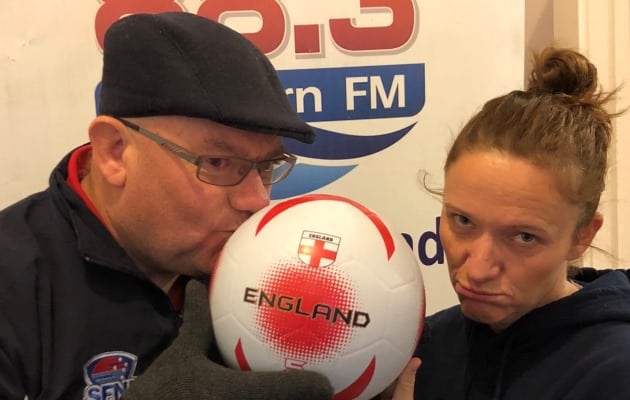 Tweet
Those that are regular listeners to the Sunday morning netball show, Nothing But Net on 88.3 Southern FM, will know that the show can descend into chaos that the embattled host Mel Aitken has her hands full in controlling.

This was no more in evidence when the recent Commonwealth Games happened on the Gold Coast, but during this time the madness around her got to Mel rather more than she now would wish.

Mel engaged in a bet with panellist Hugh Maclean over the outcome of the netball competition. She was so confident that Australia would prevail that, should this occur, Hugh would have to sing Advance Australia Fair at the netball, in full Australian uniform complete with green and gold wig. The studio guest on the day that the wager was struck, Hampton Park’s Maddie Hanlon, added the proviso that a spray tan should also be involved.

It was a silly bet to make. I mean, did she seriously believe that the might of England would be bowed by a bunch of colonial upstarts? Of course, this did not happen, as the English Roses strode to a brilliant victory, having toyed with the Diamonds throughout that glorious Sunday afternoon.

As the loser of this bet, Mel is tasked with donning the Union Jack and the Cross of St George, and singing God Save the Queen prior to the day’s netball, and she follows through on that task this Saturday.

The song shall be sung at 11:45am on Saturday June 23, at the Dingley Netball Centre at Rowan Road, Dingley. Hugh has made sure that Mel knows the words and will supervise so that the glorious anthem is sung with the passion and gusto that it should be afforded. SFNL Media Officer Will Hunter will be there to film the occasion for all to see on the League’s social media channels.

Needless to say, we’re hoping for a huge crowd for this momentous occasion, so if you are not otherwise occupied at 11:45am on Saturday morning, come down and watch due respect being paid. And stay and watch our finest ladies show their wares. The netball action begins at midday.