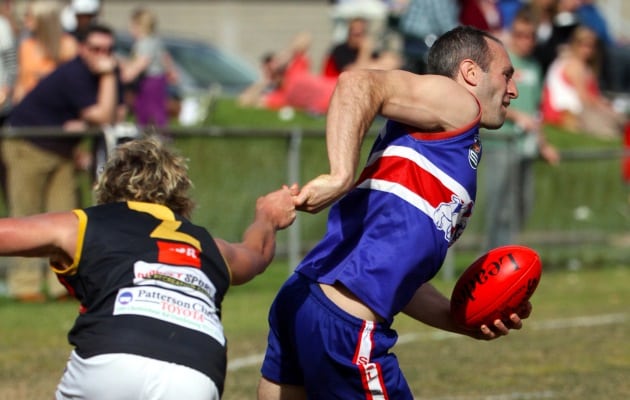 The Preliminary Final has come and gone and we discovered just who would be taking on East Brighton in the 2013 Division 1 Grand Final.

St Pauls took on Dingley in a fight for a spot in the Grand Final. These two teams have dominated this season and both deserved a Grand Final berth. But there could only be one. For much of the first half St Pauls dominated play. Their midfield players such as Liam Wilson and Adam McIntyre (2 goals) were getting plenty of touches early and a big win looked on the cards after the Dogs raced to a 16 point lead at quarter time, extending that lead to 30 points by half time.

Then came half time.

Dingoes coach Shane Morwood must have given a hell of a spray at the half time break and the Dingoes responded. Their pressure in the first 10 minutes of the premiership quarter was outstanding and it lead to them kicking 6 unanswered goals. Half forward Thomas Dureau and midfielder Luke Bartholomew were critical as the Dingoes held the Dogs to 1 point and took an 8 point lead heading into the final quarter.

With star forward Luke James well held in this contest and midfielder Trent McIntyre red carded, the Dogs needed someone to stand up if they were to win the game. Enter Callum Cathcart and Kieran Knox. With their season on the line at 3 quarter time, the two promising forwards were inspirational as St Pauls started putting pressure back onto Dingley. It was too much for the young Dingoes, who after a long season, became victims of fatigue as the Dogs kicked 9 final quarter goals to win by 43 points.

What a ripper Preliminary Final fought out by 2 worthy opponents. Unfortunately, only one team can go on to the Grand Final and that team is Mordialloc. Four times these teams have met this year, each team winning 2 and losing 2, with Mordialloc winning the one that counted the most by 1 lousy point! Oakleigh District can hold their heads high - they gave their all, but it wasn’t to be.

It has been an interesting year in Division 2 in 2013.  I have done a reflection on ladder positions throughout the season of the Top 6 Teams.

Oakleigh District spent 3 weeks on top, 11 weeks 2nd, 1 week 3rd, 1 week 4th, and 1 week 5th. Their average ladder position was 2, and ladder ranking (based on adding their positions, lowest number being most successful) was 41. 18 weeks in the Top 5.

Carrum Patterson Lakes has created history by winning through to a maiden Grand Final appearance in its debut SFL season.

And they did so in style, defeating Dandenong by 17 points in a hard-fought Preliminary Final at Jack Barker Oval.

The early part of the first term was all one way traffic with Dandenong dominating in the middle and slamming home the first three goals of the match. The Lions struggled to get the ball forward in the first 15 minutes, and although they managed to score twice in five minutes to get back into the contest, a late goal to skipper Ryan Forsyth had the Redlegs 13 points ahead at the first change.

Things went from bad to worse for the Lions in the second term with the influential Mark Fitcher coming off with a shoulder injury inside the first five minutes. Goals proved hard to come by as the game got increasingly physical, but the Lions finished the term with a couple of late majors to get within a goal at the long break.

The clouds rolled in and the temperature began to drop at the start of the second half, but the contest was just hotting up. The two sides traded goals in an enthralling, albeit low-scoring tussle, but the third term ended in a stalemate.

Dandenong’s superior fitness had allowed it to finish games strongly this season, and with CPL short on the bench, the Redlegs were confident of wrestling back control in the last quarter. But Carrum Patterson Lakes were hungrier and harder at the footy and gained the early ascendancy with Luke Walter’s goal at the seven-minute mark giving them the lead for the first time in the match. Dandenong began panicking under pressure and suffered from poor disposal and decision-making and the Lions capitalised on their opponents’ mistakes. They kept the Redlegs scoreless for the term as they ran away to a comfortable victory.

Matthew Doggett was again a prolific ball-winner for Dandenong and Forsyth was also influential. Warren Kairns stood tall in defence for the Redlegs while Chris Hatfield provided plenty of drive out of the backline.

However, Carrum Patterson Lakes’ playmakers were harder at the contest, particularly in the second half when the game was in the balance. Greg Townsend, Stu Cormack and Brett Wilson were all solid contributors while captain Daniel Graves led from the front with a sublime performance. But it was a dominant best afield display from Andrew Lucas that proved the difference. He took several strong marks and continually pumped the ball forward to turn the match in the Lions favour and get his side over the line.

With that result we are now left with just two teams fighting it out for premiership glory.

After four quarters of enthralling football, Murrumbeena pipped Skye by the barest of margins in a thrilling Preliminary Final.

The two sides went goal for goal in a low-scoring contest for the first quarter and a half. Beena had plenty of opportunities to gain the upper hand in the second term, but couldn’t convert them on the scoreboard. Skye, on the otherhand, seized their chance with two late goals to take a nine-point lead into the sheds.

But cometh the hour cometh the man and Murrumbeena forward Daniel Entwistle stepped up to the plate. He booted the only three goals of the third quarter and the first of the final term to give his side a two-goal lead. Skye then responded with two quick majors to level the scores at the 13-minute mark.  But it was the two most influential players on the ground, Entwistle and Jackson Meredith, with consecutive goals to give Murrumbeena back a 13-point advantage as the clock ticked into time on.

It seemed all over for the Bombers, but in the most frantic few minutes of football for the season, Jordan Thomas and Jamie Solly-Prestage scored in quick succession to give their side a sniff. Skye pressed forward again, but the siren beat them as Murrumbeena recorded a heart-stopping one-point victory and a deserved Grand Final berth.