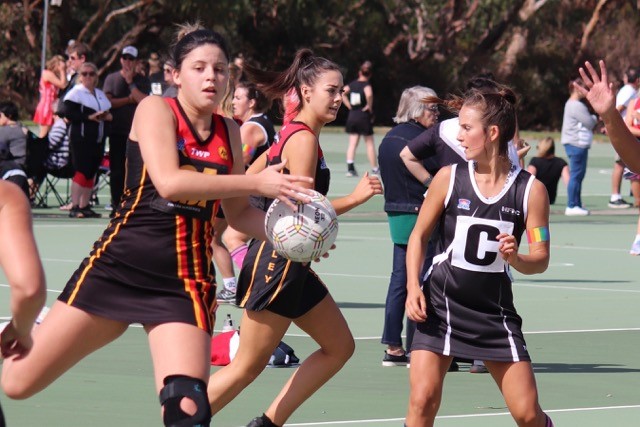 
Give me a home amongst the sand flies.  At least that’s what greeted the participants as they took to the court to open the 2019 season.  But despite the cloud of flying pests there was enough netball played to show that there will be few easy games in division one this year.

Last year’s grand finalists played off to start the season and immediately showed that the off season had not dulled their sparkle.  From the opening pass both sides looked slick in their combinations and sure in their handling, but it took a little time for the shooting to follow suit.  Once the first shot dropped through Mordialloc’s Emily Morris and Sophie O’Shea quickly levelled, the game was truly on.

Mordialloc wing defence Jess de Garis was in everything early, and gave her shooters enough supply to establish an 11-7 quarter time lead, and while O’Shea started the second term on fire to diminish the gap the Mordialloc shooters quickly countered.  The makeshift Caulfield defence of Kaitlyn Black and Rachael Doughty did a fine job to restrict Mordialloc’s opportunities, but the two sides largely went goal-for-goal through the middle of the match to keep the margin at four at both half and three-quarter time.

Mordialloc’s Lucy McKeown and Nicole Delany struck early to increase their advantage, and whilst Caulfield worked hard to breach the gap they were unable to prevent a solid 37-31 Mordialloc win.  Although vanquished, Caulfield were missing five of last year’s grand final and showed enough to suggest that they will be a huge threat once again in 2019.

For Dingley early it looked like nothing had changed from any other season since the SFNL began.  Their defensive pressure was immense, their ball movement despite many new faces looked sharp and precise, and the combinations between mid-court and attack conveyed danger.

Heatherton’s new, young side conversely took a little longer to gel.  Courtney Osborne was at the fulcrum of all that was good about the Tunners’ build-up play but with shooter Ella Quinlan making an immediate impression, Dingley took a 14-8 lead to the first change.  The second quarter saw more of the same, with the experienced Laura Piper replacing Ella Quinlan and giving Heatherton no relief as the lead was extended to eight at the main break.

Heatherton began to more than hold their own in the third term, although consistently finding a brick wall in the impressive Emily Kay in the Dingley defence, but they made a real charge toward the end of the quarter and at 31-26 they fancied their chances going into the final stanza.  Dingley though were too experienced and they held firm to complete a 43-36 victory.

Heatherton lost no admirers first up.  Lauren Wenn was impressive in the back half, and Charlotte Howard and Lauren Spinks showed enough to suggest that they will be a constant threat in the circle.  They will improve as their cohesion grows over the season.

With both sides making their division one debut, albeit with Oakleigh having a plethora of top level experience, the District line-up went into this game as firm favourites.  Nobody told Cheltenham this however, as they gave arguably the most impressive display in leading the game for the best part of three quarters.

Immediately there was plenty of space in mid-court, and this suited Cheltenham as they passed the ball well and made their Oakleigh opponents chase them.  This was largely the same Cheltenham outfit that won division two last year, and their cohesion showed as they strode to a 10-6 quarter time lead.  The Oaks started to get their game together in the second term, with the Mifsud sisters starting to take effect and Bella Riddell unerring under the ring, but with Nieve Harrison clever and Annabelle Gorman dangerous for the Rosellas they retained a 20-19 advantage at the main break.

Cheltenham continued to run hard and make intelligent angles but the experience and potency of the Oakleigh side started to show leading up to three quarter time, and they took a two goal lead turning for home.  Cheltenham, however weren’t done yet, and regained parity with five minutes to play, but Bella Riddell’s efficiency gained Oakleigh a run of three goals, an advantage that Cheltenham were unable to breach as Oakleigh scored a hard-fought 43-40 victory to open proceedings for 2019.