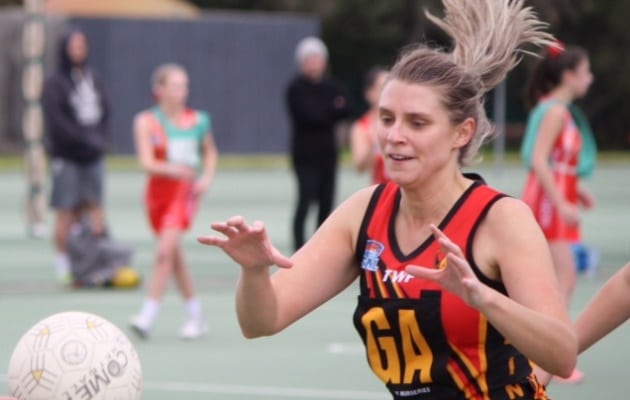 This is a re-run of the Grand Final from last season, and Keysborough will be keen to avenge their defeat on 2015’s last day. Dingley have won all three meetings this year but this will count for little this time. Keysborough have stars at both ends of the court with shooters Abby Mackie, Laura Agius and Bec MacInnes when needed being deadly and Sam Downie being in splendid form in defence. The key for Dingley may be in how Amber McHenry and Brittany Goldsmith nullify Keysborough’s scoring threat. There won’t be any fancy margin here but I’m tipping Dingley to keep the dream of four flags in a row going for at least one more week,

Two sides play in this final whose best can trouble any side but whose worst will not win them a final. They have played twice this season for one win each. This may end up as a shootout between St Pauls’ Grace Healey under one goal and Mordialloc’s Bec Britton beneath the other, so the side that gives their shooters the more plentiful and cleaner opportunities will probably end up victorious. I’m tipping Eliza Barnes and Meg Geschke to have big games here and give St Pauls another shot at Heatherton in the big dance.

Neither side in this clash had an easy semi final, if such a thing exists. Dingley came off second best in a very physical tussle with Heatherton, while St Kilda played in a close contest with Black Rock in which every contest was meaningful until the last minute. City will know that they can beat Dingley having done so early in the season, and Dingley are coming off three straight defeats. The Saints are strong all over the court, but something tells me that the defensive skill of Maddy Taylor and Eleanor Douglas, and the combativeness of the likes of Mel Ades in the mid-court will restrict St Kilda City to a losing score here.

Local bragging rights as well as a Grand Final place are at stake in the closest competition of the SFNL. The more experienced Black side achieved a narrow victory in the only meeting between the two sides this year. Can the tenacious and creative Stephanie Peacock lead the White midfield to feed enough good ball to shooters Chelsey McAndrew and Alicia Quinn? I’m tipping the experienced Yvonne McMillan, Shelleigh Papatsikas and Jaime Regnier to hold sway and give Heatherton Black a shot at South Yarra next week.

Heatherton will know that their Second Semi Final against Black Rock was there for the taking. Will they be able to put aside this disappointment against a young and fearless Bentleigh unit? Interestingly enough these two sides have not met this season owing to Bentleigh’s Round 6 forfeit, so each side will be an unknown quantity to the other. Bentleigh, led by impressive shooters Mia Lopez and Jade Hildyard have looked good in recent weeks, but I’m prepared to give Heatherton the benefit of the doubt in this one.

South Yarra finished the regular season two games clear of Caulfield and crushed the Bears by 57-21 in their only meeting in Round 7. Against that, South Yarra come off a defeat by Lyndhurst whilst Caulfield couldn’t have been more impressive in ending Lyndale’s premiership hopes. Hannah Smith could hold the key to this one, supplying the bullets for the impressive South Yarra shooting division to fire. I think the Lions may be just a little too good here.

A casual look at the points table would point to Mount Waverley taking a deserved favouritism into this contest, but sometimes appearances can be deceptive. Mount Waverley have the experience of being here before on their side, and the knowledge of the likes of Madeleine Boros and Emma Kerr, coupled with the shooting threat of Lauren Martin could be a key to their chances. The Oaks are in their first season in the SFNL, and have come rattling home in the latter part of the season. I think if there’s going to be an upset this weekend it could be here, with Oakleigh continuing their roll.

Cheltenham suffered just their third defeat of the competition in the semi-final last week, and have beaten Keysborough convincingly in both meetings this season. That said, this is a final and anything can happen. Keysborough’s best chance here is to control the mid-court and limit the supply to Cheltenham’s crack shooters Beth Miller and Brooke Davis. To do this they will need to out-work a very fit Cheltenham outfit. This may be a bridge too far for the Borough.

Dingley One v Mordialloc One

On paper this looks like an open and shut case for Dingley. If Mordialloc can start the match well though they may be able to play upon the nerves caused by expectation of the Dingley unit. Dingley looks to have winners all over the court, and to win this one Mordialloc will be relying on the likes of Roisin Tuke to finish the majority of their opportunities. I don’t think they will have enough shots in the locker to prevent an all-Dingley Grand Final.