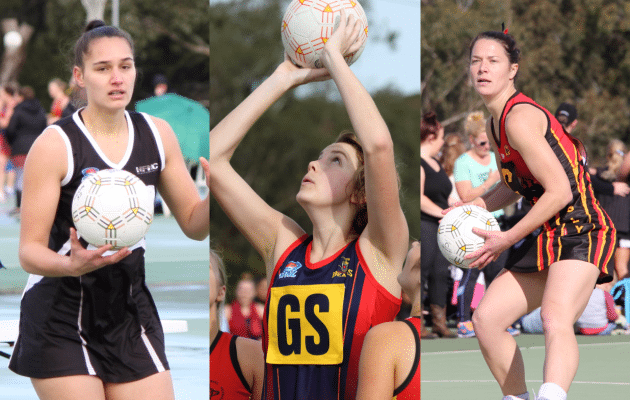 2017’s SFNL netball season was one in which two new teams came to Division 1, and each showcased players who brought new skills and fresh excitement to the competition. Heatherton White and St Pauls added new dimensions and welcome intrigue to a 2016 which, the quality of the play on offer notwithstanding, was not long on unpredictability.

The new sides were competitive from the jump, with Heatherton White starting the season in a blaze which saw it lead all comers after round three, whilst St Pauls grew into their season to the point that it was a match for the best sides by season’s end. And indeed, their best players were as good as any on show during the year. Who was the best of the best? I feel that the league best and fairest may come from the following batch of players:

2017 was a great year for the shooters, with many finishers of the highest quality plying their trade in the south. And of all on offer, few had the presence of Natalie Billings. She allied her height and strength with great agility and a natural determination and will-to-win, to form a partnership with Rahni Samason that contributed towards Black’s competition-high 799 goals in the regular season. But there was more to Natalie’s season than just numbers. There are few better players on the big occasion than Natalie, and there are also few goalers more consistent. It would be no surprise to see Natalie Billings near the top of the leader board right into the late rounds of the season.

Makayla Bulte gave glimpses of the talent that she possesses in 2016, and 2017 saw her take huge steps forward to become one of the competition’s elite mid-court generals. The Mighty Mak learned what it took to take games of division one netball by the scruff of the neck and control them to give her team victory, and this contributed greatly towards Caulfield emerging as a potential powerhouse for future seasons. The other impressive part of her development this season was the ability to stay in matches and impose herself on the contest even after a slow start, meaning that Makayla Bulte posed a constant threat for her opponents game in, game out.

Grace by name, grace by nature, the St Pauls spearhead was one of the most watchable players for netball enthusiasts in division one this year. In the early season when St Pauls were finding their feet in the top division, the positional intelligence and accurate shooting of Grace Healey kept St Pauls in contests even when they may have been struggling around the court. Later on when her team had adjusted to the speed of the top flight, these same attributes won St Pauls matches that some watchers thought they couldn’t. Add to this a mental toughness that saw her shrug off injuries that would have ended the day of lesser players, and you finish with a stellar season for St Pauls interleague goal attack.

The leader and the talisman at the Bear Cave, Sophie O’Shea benefitted from the improvement shown by the young talent around her, and continued to star herself as one of the finest of the brilliant batch of southern shooters. Sophie’s greatest strength is the ability to use the goal circle and place herself in the best position to finish the work done by the mid-courters and keep Caulfield’s score ticking over. This ability not only netted her 256 goals during the regular season, but was also instrumental in assisting regular partner-in-crime Georgia Heenan to 188, and magnifying the threat of whoever may have been around her. This plus Sophie’s ever-present leadership qualities equalled a player who will be in the thick of the voting.

One of the leading young netballers in the SFNL, Bella Riddell has the natural ball sense that can’t be taught, and pairs this with a deadly shooting accuracy that has few equals in the top division. She emerged as one of the leaders of this youthful side, and formed a shooting combination with Mia McMillan that formed such an even, potent threat that they couldn’t be separated with 217 goals each during the season. The beauty of Bella Riddell’s game is the fact that she doesn’t need a plethora of possession to really hurt her opposition on the scoreboard, and the danger that she posed as either a shooter or a provider within the goal circle was a major factor in the standing earned by Heatherton White in 2017.

Rahni Samason has been here before as one of the co-winners of this title in 2016, and her year in 2017 has lost little in comparison. Her 351 goals during the regular season was matched by no shooter, and her combination with Natalie Billings was a vital component of the championship winning Heatherton Black side. There is no fuss about Rahni Samason. She just fronts up every week and gets the job done; rarely, if ever, playing a bad game. Will the combination of VNL commitments and the cavalcade of star players around her also polling votes cost Rahni the chance of going back-to-back? Only time will tell, but no-one could begrudge the competition’s premier markswoman another best and fairest medal.

If the SFNL netball competition is a garden of flowering plants, then Alicia Wise is the league’s hardy perennial. She dons the tunic season after season, and each October we talk about her as a potential best and fairest medal winner. Even though she missed over a month of netball due to overseas travel, the reigning medallist was dominant enough in the games that she did play that she is yet again worthy of consideration in 2017. Whether in defence or mid-court, Alicia continually drove the Dingley side forward, and marshalled her troops expertly to the point where the Dingoes won 13 of 15 regular season matches, only dropping points to the eventual premiers Heatherton Black. It would be a brave tipster that would write her chances off for this year’s medal. Or next year’s for that matter...

So who takes the medal home? There are arguments for and against these and many other players within the SFNL, and it’s sure to be a close vote. But if forced to make a prediction, I’ll stick my neck out and tip Bella Riddell. Whoever finishes the count on top of the leader board, they will be a worthy winner.