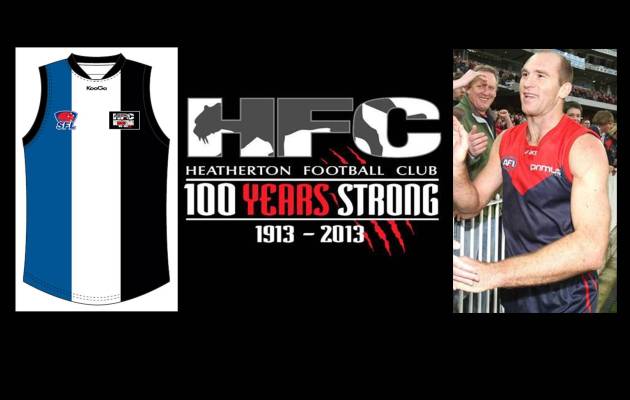 Neitz pulls on the boots one last time

THE ton is up for the Tunners.


The centrepiece of Heatherton Football Club's 100th year comes this Saturday when it hosts Highett at the Ross St ground.

The centenary match will also serve as a fundraiser for former player Rick Crowe, who became a quadriplegic at the start of the year.

"And I wasn't all that impressive,'' he said with a chuckle.

"I'm hoping for a better return this time around.''

He said he had stayed reasonably fit "but I think I'm going to have my work cut out next weekend.''

Neitz said it was important to support Crowe, with whom he went to primary and high school and played junior football at Parkmore.

Crowe was injured in a jumping-castle mishap early in the year.

"It was a shocking life-changing incident for him,'' Neitz said.

"Such a simple thing as jumping around in a jumping castle has had a huge affect on him."

"But he's been phenomenal in his attitude towards getting the most out of everything he's got. He's inspiring the way he's approaching his challenges.''

Heatherton coach Clint Einsiedel said that while it was excellent to have Neitz and Georgiou in the line-up, the club had to ensure the match "doesn't become a circus''.

He pointed out only one game separated Heatherton and Highett in a fight to avoid relegation.

"It's a huge game for the footy club's future," Enseidel said.

"It's the celebration of 100 years but it could end up being a really bad day if we don't concentrate on what's important and that's getting the four points."

"So we don't want to have too much of a focus on the two fellas coming in."

"We'll work out their best roles and go about getting the job done."

"Then we can have a good celebration.''

Heatherton was formed in 1913 and has been affiliated with a string of competitions, including Federal, Berwick District, Caulfield Oakleigh, CYMS, VAFA, Eastern Suburban Churches and Southern (since 1992).

It was known as the the Freighters (officially Mentone Freighters) in 1951-52.

As a result of Moorabbin joining the VFA in 1950, the Bloodhounds' Under 18 team merged with Heatherton.

Later, the club was known as Mentone CYMS when it competed in the CYMS and YCW competitions.

Donations for Rick Crowe can be made at the gate, and there will be a luncheon, guest speakers and an auction of sporting and other goods.