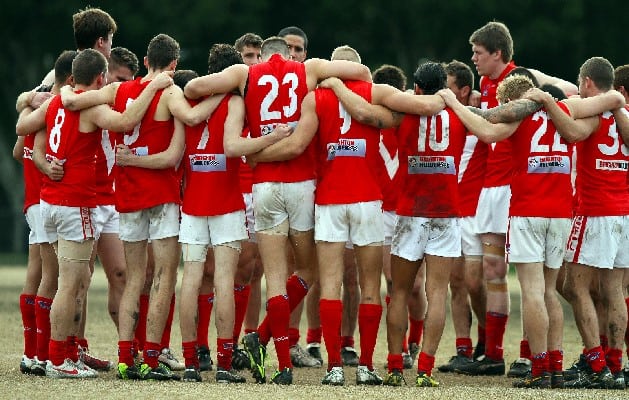 Match of the Round Broadcast / Weekly Awards

With Dingley and East Brighton both undefeated after Round 6, this week's "Bendigo Bank Cup" at Hurlingham Park is set to be the clash of the round for Division 1 in the SFL. Bendigo Bank in Elwood proudly sponsor both East Brighton and Dingley Football Clubs as well as many other community sporting bodies.
Bendigo Bank is committed to supporting local communities. Directors Gary Scott and Alistair Chisholm will be in attendance to present the winning team with the Bendigo Bank Cup as well as a cheque for $1000. Dingley Football Club took the honours in the first showdown and the Vampires will be out to seek revenge this week.

Federal Football League Reunion 2014. A day for all past players, officials and supporters of all clubs who participated in the FFL (1909-1981). Meet up with past team mates and opponents and possibly reconnect with long lost friends from the days of the strongest Metropolitan Football League in Melbourne.

Wiz, Beanie and the Bug will be talking all things Southern Football League on The Sunday Footy Show, this week the show will be like from Jack Barker Oval. The Sunday Footy Show is proudly supported by Ivan's Pies, and by simply tuning in for the latest news and views, you could win some delicious prizes courtesy of Ivan’s Pies.

This week’s guests will be Andrew Butterfield – Coach of Cheltenham, along with Bentleigh senior coach Brad Canavan.

The latest photos can be viewed in the Photo Gallery.

Tribunal Results are available under the 'Club Admin' tab above.