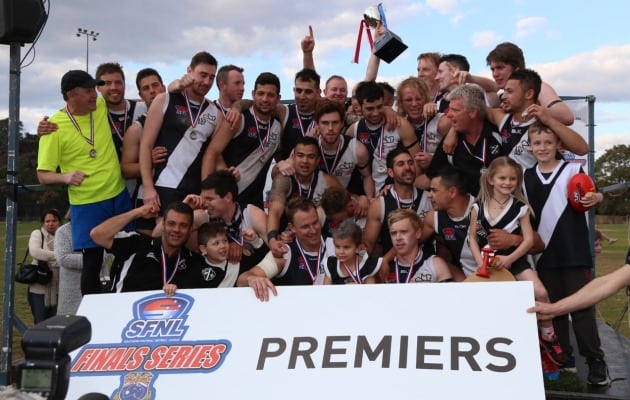 Oakleigh District has turned the tables on its premiership woes, defeating Murrumbeena 16.10 (106) to 6.8 (44) in the Southern Football Netball League Division 2 Grand Final and secure a spot in Division 1 in 2016.

Unlucky 13 turned lucky for the Oaks who got four goals from star forward Dave Velardo and three from Justin Hill while Andrew Howison capped off an impressive season with the Meneilly Medal for best on ground to go alongside a premiership medallion.

It was an impressive victory for Oakleigh and it capped off what was one of the best seasons in the club’s recent history with arguably the best team the club has fielded in years. With the pressure firmly on the players, they rose to the challenge in superb fashion and showed that they could be a team to watch in Division 1.

For the Beena, the loss was a disappointing end to the season but the club can hold their heads high after defying the odds and proving that heart, determination and hard work still has a place in the game.

Captain Mitch Walder was Murrumbeena’s best and never gave up in a day where Oakleigh seemed to have all the firepower while Anthony Ekberg-Weiss bagged three goals and was the Beena’s most dangerous forward.

Oakleigh got off to a blistering start with six goals in the first quarter and blew Murrumbeena out of the blocks, holding it to just one major as the Oaks opened up a 29-point lead at the first break.

Despite giving it their all, the Beena struggled to have an impact on the scoreboard in the second quarter as Oakleigh continued to drive the ball inside 50. Murrumbeena’s defensive game limited Oakleigh’s ability to score at will but it still managed three majors to lead by 47 points at the half time.

Murrumbeena finally got its second goal of the match in the third term and piled on another two goals as the forwards took the opportunities presented to them.

Oakleigh had all the answers and added another four goals to its tally to take an unassailable 51-point advantage into the final change.

Despite inaccurate kicking, the Oaks put on a display of raw offensive firepower in the last quarter and showed just how potent they can be, kicking 3.7 to seal the 62-point victory.

Murrumbeena kicked another two goals in the term but was simply overpowered by the best side in the competition.

In the end, Shayne Sheedy and the Oakleigh players deserved the victory and a spot in Division 1 after a fantastic season. If players such as Dave Velardo, Luke Casey, Marty Gurry and Brody Hodic stick around for another round of preseason training, the belief is there that they can make an impact in the top flight.

For Murrumbeena, although it wasn’t to be on the day, the season was a huge success and considering most punters had them fighting to stay in Division 2, the Beena showed they have a bright future and with players such as Ekberg-Weiss, Dean Spanos, Alex Moloney and Dylan Elkman leading the way.

The Beena have an inspirational captain in Mitch Walder and a strong coaching staff led by Stevie Wright, Murrumbeena will be a force to be reckoned with in 2016.

Click HERE for the radio team's commentary of the big game.

Andy Howison was dominant through the midfield all day.

Matt Nicholas gets a kick away. Oaks forward Dave Velardo snaps one of his four goals. The moment of euphoria as the Oak's premiership drought is finally broken. Photos courtesy of Photogenix. Photos from this match and other games during the 2015 SFNL SAS Security Finals series are available to purchase at www.photogenixsports.com.au.