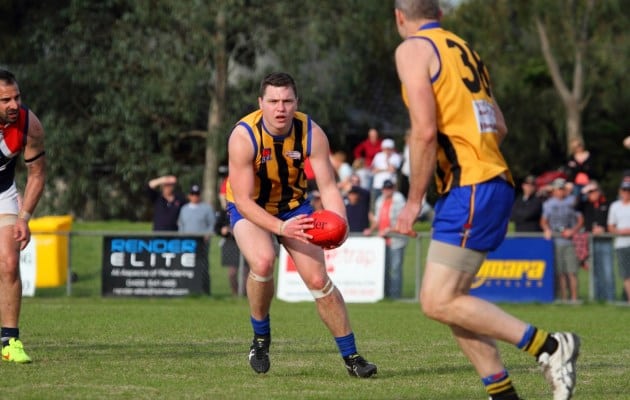 Division 1 – Round 6 Preview
With Good Will Hunter

The top four sides are all sitting pretty with a 4-1 record and they are beginning to put a bit of gap on the rest of the competition. This it will make for some interesting matches in Round 6.

East Malvern V Mordialloc – Dunlop Reserve
This will be the clash of the round between second and third on the ladder. There is much at stake here as the loser could potentially drop as low as sixth depending on other results. Mordialloc have proved to be a real surprise packet in Division One so far, pulling off a couple of terrific wins against the odds in a dream start to the year. But with every win the Panthers look more like premiership contenders and I think they will be hard to beat at home.

St Pauls V Cheltenham – McKinnon Reserve
Cheltenham showed tremendous resilience to bounce back with a win after Dingley pantsed them the previous week. That said they didn’t exactly set the world on fire against Bentleigh. The Dogs seem to have dropped off from the pace-setters this season, but are still talented enough to see September action. A loss here may make it difficult for them to claw their way back into finals contention, so with that on their minds I’ll back them to win a close one at the Kennel.

Clayton V St Kilda City – Meade Reserve
I reckon St Kilda City are playing much better footy than their 1-4 record suggests, given their losses have all been relatively close ones. The Clays’ defence, meanwhile, has been an area for concern as they’ve conceded the second most points in the comp, despite winning two matches. It’s difficult to see the Clays getting up in this one, especially after last week’s massacre.

Bentleigh V Dingley – Bentleigh Reserve
Both these teams play an exciting brand of football, so this could be a cracking game to watch. The Demons play Bentleigh Reserve really well, and their kids are always willing to have a dip, so I’d expect a commendable performance from them. However, on form it’s hard to go past the top-of-the-table Dingoes.

East Brighton V Chelsea Heights – Hurlingham Reserve
Not sure if this will be much of a contest. East Brighton were back to their devastating best last week while their opponents sit bottom of the table without a win. This could get ugly for the Heighters.

Division 2 – Round 6 Preview
With Jason Barbin

Several teams look to make their way up the ladder in round six as the top five begins to take shape.

Skye vs Caulfield (Carrum Downs Reserve)
Both teams are coming off disappointing losses and after strong seasons in 2014, will be determined to prove that it wasn’t a once off. Oddly enough, after boasting one of the premier division two backlines in 2014, Skye now boast the highest scoring forward line so far this season. Caulfield have given Skye some tough matches recently and will look to do the same again. But the Bombers and their newly found offensive power should be able to get the job done.
Skye by 22 points

Oakleigh District vs Doveton Eagles (Princess Highway Reserve)
In the past, I would label this as a potential ‘danger’ game for Oakleigh, based purely on their amazing ability to lose the games they should never lose. But there is something different about this Oakleigh team this season. It could be the fact that they have a key forward that is capable of kicking bags of goals. David Velardo has 20 goals in his last two encounters. It could be 30 by the start of next week.
Oakleigh by 48 points

Heatherton vs Hampton (Ross Street Reserve)
For a few weeks, Heatherton had shown some serious flashes of potential. That all came crashing down when they were held goalless by Oakleigh in the first quarter of their game. Hampton, who were embarrassed by Oakleigh even more, bounced back in style by defeating Caulfield. Heatherton clearly have some potential in their side and if they can relive that potential they might be able to steal this one.
Hampton by 24 points

Springvale Districts vs Keysborough (Springvale Reserve)
Springvale were simply awful in their game against Murrumbeena and their opportunity to bounce back couldn’t be against a tougher opponent. Keysborough have been outstanding so far this season and have adjusted well to the Southern style of play. Tyson King has been reliable up forward while James Gough needs to hit some form if Springvale are going to fight to get into the finals.
Keysborough by 37 points

Highett vs Murrumbeena (Turner Road Reserve)
Despite these two teams sitting in the middle of the ladder, they are two of the inform teams in division two and this clash has game of the round written all over it. Highett have been good in winning three straight but they come up against a Murrumbeena side dripping with confidence after their biggest winning margin since 2013. This will be an exciting game that could go either way.
Highett by 5 points

Division 3 – Round 6 Preview
With Andrew Paloczi

Looking to round 6, there is an exciting match in store when Carrum Patterson Lakes hosts Moorabbin. The Lions will be looking to prove that their round 5 loss was just a short-term glitch, but Moorabbin will be full of confidence, and may just manage another win here.

The bright start to Endeavour Hills' season is fading fast, with the team suffering three losses in a row. Although the Falcons are at home, they will struggle to beat Lyndale.

Sandown was valiant in round 5, pushing one of the top sides. The Cobras should go into this week's home game confident of making Black Rock work for the points, but the Jets will have a little too much polish.

It will be interesting to see if South Yarra can build on its shock round 5 win when it ventures to Ashwood’s ground. The Magpies may be a little too strong at home, but it is far from a certainty.

Dandenong is the away team in an evening battle against Hallam, and this promises to be an enthralling game. The Hawks are due for a win and this is a real chance, although Dandenong will be confident after a victory and will not be easy to topple.

It is hard to put a positive spin on the challenge facing the Southern Dragons when they venture to Mount Waverley’s home ground. With the Lions coming off a loss, they will be keen to inflict maximum damage, and a margin over 100 points is likely.