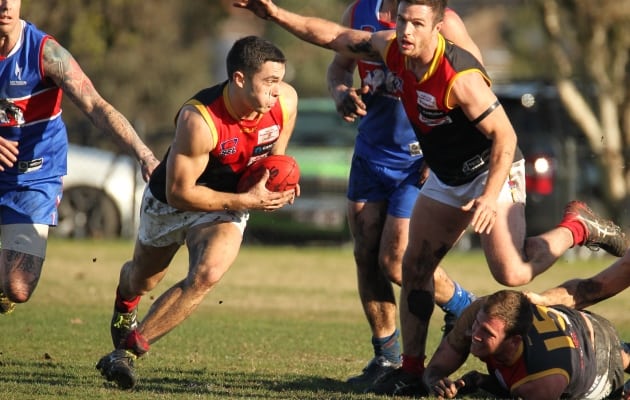 It was a huge afternoon at Meade Reserve on Saturday as Clayton celebrated the extraordinary 350th game of club stalwart Corey Pearce.

But although Pearce’s reserves side couldn’t salute in his milestone match, going down by less than a kick, the Clays’ seniors, no doubt inspired by the exuberant crowd that included a copious number of former Clayton luminaries, rose to the occasion to record a stunning upset over the fancied East Malvern.

Meade was a slow and heavy track owing to the deluge that Melbourne copped during the week, but Clayton mastered the conditions to run out 7.16 (58) to 6.13 (49) winners.

The tackling pressure from the black and whites was absolute ferocious, particularly after the long break, which perhaps caught the Panthers unawares as they were unable to get their normal game going.

The two sides were neck and neck for much of the low-scoring second half before Daniel Kirby’s goal at the 14-minute mark of the last quarter edged the Clays ahead. The home side then held the Panthers at bay in the final minutes to record a stirring victory and keep their finals dreams alive.

Clayton ruckman Trent Papworth was simply colossal, both in the air and around the ground, while Chris Morrison and Dean Scanlon continued their good form at his feet.

Papworth’s opposite number in Matt Terech was one of the standouts for East Malvern alongside raging bull Nathan Robinson.

Over at Bentleigh Reserve, the Demons proved too good for Cheltenham, claiming a 13.7 (85) to 6.8 (44) victory and second spot on the Division 1 ladder.

The young Rosellas entered the clash on the back of an unexpected three-game winning streak, and started in a positive fashion. They kept the hosts on their toes early, with just one major splitting the combatants at the main break.

However, Bentleigh stamped their authority on the contest with five goals in the third term to distance themselves from the plucky Chelt side.

Bentleigh’s Pat Nicholls finished with a bag of five goals against his old mob, while young Saf Balic and the experienced Scott Lawry were also exceptional.

Renny Trainor and Jack Barclay were among the visitors’ best. Around the corner at McKinnon Reserve, Dingley ruthlessly crushed a disappointing St Pauls outfit 19.8 (122) to 2.13 (25)

The Dingoes were simply unstoppable around the ground, with Kane Davidson and Josh Ferguson particularly prolific through the midfield. They kept the Doggies goalless in the first half, by which stage they led by an insurmountable 61 points.

Calhan McQueen also dazzled up forward with six goals for the winners in a welcome return to form. Meanwhile Oakleigh District has ended a run of three consecutive losses with a comfortable 15.11 (101) to 8.7 (55) triumph over St Kilda City at Princes Highway Reserve.

The Saints were industrious early, and their opening term efforts were rewarded with a 10-point quarter time lead.

However, a blistering five-goal-to-nil second term gave the Oaks the ascendancy, and from there they overwhelmed the Saints with another five goals in the last quarter sealing the four points.

Jake Mullen returned from suspension with his best performance yet for the Districts, kicking two goals in a scintillating best-afield display. Dave Velardo and Brody Hodic also combined for seven majors. The Oakleigh District Senior team was pretty in pink over the weekend to support the Breast Cancer Network Australia.[/caption] Daniel Saldanha (left) and Dan Kiellerup were all smiles after their 150th games on Saturday.[/caption]

And it wasn’t the celebration East Brighton were hoping for as Mark ‘Jewie’ Jamieson overtook Ross McCulloch as the club’s games record holder, mercilessly thrashed by Mordialloc to the tune of 169 points at Ben Kavanagh Reserve.

Bloods spearhead James Morris had a day out with 10 sausage rolls, while Matty Ravenall booted eight to snare best afield honours ahead of Beau Turner and Simon Fragiacomo.

The man of the moment Jamieson was serviceable, but Ryan Cosgrave was voted the Vampires’ best.

After some surprising results in Round 12, the bottom half of the top five is far from set in stone while the battle for second spot rages on.

This was a great win for the Burra and although their finals hopes are slim, they are alive after upsetting a disappointing and inaccurate Dogs outfit. Bryce Sutton and Dylan Carlsson were in superb form for Keysborough while Daniel Morland and Cameron Dalton kicked two goals each. Despite going into half time without a goal, Highett only trailed by a point but a four-goal third term from Keysborough gave it the advantage and the Burra held on for their, albeit ugly, fifth win of the season.

Nick Gilbert was back to his best as Caulfield overcame a gallant Springvale Districts side by 39 points. Gilbert kicked four majors while Brandon Turner and Tom Stait impressed with their performances in a grinding affair. The Bears led by 13 points at the half but didn’t really dominate proceedings with the Districts managing to hand around. But Caulfield persisted and pulled away enough in the last quarter with two goals to run away with the win.

It wasn’t the perfect game but the Jets played themselves into a little bit of form, despite going down to Chelsea Heights by 47 points. Jessie Odell was stunning in his efforts across the ground while Lachlan Dobson put together one of his best performances of the season, banging home seven goals. The Heighters only led by 13 points at quarter time but strung together four goals in the second and third terms to stretch the lead out to 52 points. Despite the unassailable lead, Black Rock kept fighting and kicked four goals in the final term to cut the winning margin to 41 points.

Jason Butty was another player back to his best, booting four goals in the Colts’ 43-point win against Skye. Brad Sutcliffe was also impressive, named best on ground in a match which saw Port Melbourne trail by three points at the main break. Skye booted five goals in the second quarter to take the lead but Port Melbourne flicked the switch in the third term, booting six goals to once to take a 31-point advantage into the final break. The final term was hotly contested but five goals from the Colts was enough to secure the win.

Murrumbeena has avenged a Round 2 loss to Heatherton, defeating the Tonners by four points in an exciting contest. After trailing at each interval the Beena overcame a 13-point three quarter time deficit, holding Heatherton to one goal while booting three themselves in the final term to secure the win. David Murphy, Harley Turkington and Declan Turkington were all outstanding for Murrumbeena, booting two goals each.

CPL was kept goalless in the third stanza with the Mountain Lions’ advantage blowing out to 87 points as the ladder leaders slammed on five goals for the term.

The final siren came as a mercy for CPL as it went down by 118 points, after completing a goalless second half.

James Gough was the newsworthy spearhead, this time managing 13 majors for the Mountain Lions.

Gough has now kicked 67 goals for the season, putting him 12 goals clear of teammate Luke Galle on the division’s goal kicking table.

Astoundingly, he has kicked a total of 39 goals in his last three games.

Endeavour Hills started positively, with Daniel Morrison goaling a minute into its contest with Ashwood.

However, the Magpies replied seconds later through Mitch Saunders, before racing to a 26-point lead in time on.

A late goal got the Falcons’ deficit back to 20 points at the first break. This gave them encouragement and they attacked in the early minutes of the second term.

Endeavour Hills made significant inroads late in the term to sit just four points behind Ashwood at the long break.

The Magpies dominated the third term with three goals to none and eventually skipped away to a 44-point win. Dale Carroll was again prominent, with four goals, whilst the SFNL radio team named his teammate Saunders as the player of the day.

The loss of Mitch Whatman due to a knee injury early in the match was costly for the Falcons and the side relied too heavily on Morrison for its goals. He managed four majors, but the rest of the side added just another five. After a more competitive showing last week, it was back to familiar territory for Sandown as Doveton spanked it by 119 points.

Jordan Waite was a rare positive for the Cobras and kicked half of the side’s six goals.

For the winner it was Adam Read who showed the way, this time booting 11 goals in a best on ground performance.

After coming up short in a home game last week the Lions were switched on, leading at every break and triumphing by 20 points.

Kieron Finlayson was the winner's best and Shaheen Merchant was the Lions' chief goal kicker with three.

Moorabbin was in command throughout to defeat Dandenong by 37 points. It was the Kangaroos’ first win since April.

Jack Williams was the star performer with six goals for the victor.

Hallam returned to form and bounced back into the top five with a 73-point win over Lyndhurst.

Lightning had won its previous couple of games, but was outscored in every quarter by the Hawks.

Round 11 brought a handful of upsets and of the five fixtures there were four games with a margin of less than five goals. Ultimately, it was one of the closest rounds of the season and paves the way for the final seven games as we head into finals.

Cheltenham were the round’s big winners as they comfortably defeated East Brighton-Bentleigh by 74 points. The Vampires were unable to keep in touch as Cheltenham broke the game open during second and third quarters.

They outscored the Vampires by seven goals during this period to lead by 50 points going into the final change. Moreover, the performance was underpinned by an even spread of goal kickers with Lewis Trainor and Tom Davis both kicking three apiece to keep the side within touch of the top four.

With Hallam enduring their first bye round of the season, other finals teams were hoping to make their move. As one of the contending sides, Oakleigh were keen to make their mark against St Kilda City. It was a consistent and spirited effort from Oakleigh resulting in a 26-point win. St Kilda remains in the top four and will continue to work toward finals football while Oakleigh are beginning to solidify themselves as genuine premiership contenders.

St Pauls faced Dingley for the second time this season and the game was completely different to their opening contest. The Bulldogs were never able to gain full control of the game as Dingley levelled the scores just before three-quarter-time. However, the Dingoes were unable to convert their chances and despite Lewis-Smith’s five-goal haul, the Bulldogs proved too strong thanks to Cooke’s six majors. Both individuals ensured one of the best games of the season but the loss is an unfortunate setback for Dingley.

Meanwhile, Hampton were keen to take advantage of a home fixture with Endeavour Hills but were pushed until the final siren. The final margin was 18 points but the performance of the Falcons will give them hope for the coming weeks as they look to close the win-loss gap on the top six. For Hampton, they now have games in hand and sit happily on top of the ladder.

Finally, Carrum Patterson Lakes registered their first win of the season against rivals Highett. In an entertaining game, the Lions prevailed by 10 points. Both sides were able to score at regular intervals after the opening term with Alex Wilson and Hayden Hudgell combining for nine vital goals. The season continues to provide interesting results and there are plenty of finals spots still there for the taking. The Oakleigh District Under 19s turned out in pink no Saturday to support the BCNA.[/caption]