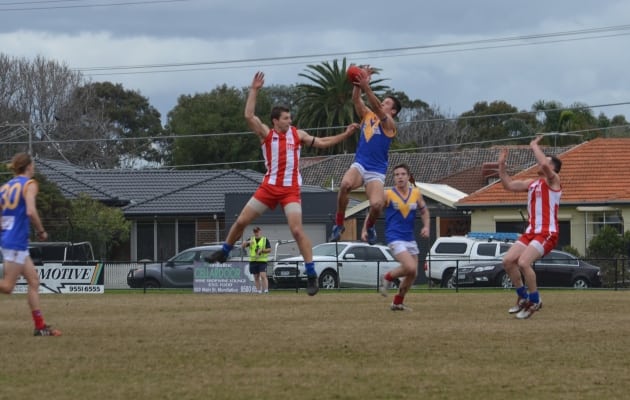 One of life’s old truisms is that when the going gets tough, the tough get going.

And so it was with Dingley, who overcame multiple setbacks to record a gritty 10.6 (66) to 8.6 (54) victory over Mordialloc at Ben Kavanagh Reserve.

The Dingoes burst out of the blocks, booting the first five goals of the match to scoot to a 32-point lead two minutes into the second term.

But just when it looked like turning into a replay of the 2015 Grand Final, Mordialloc began to get a bit of a run on. They nailed two quick goals before young Dingo Rob Rusan was stretched from the field and hospitalised after a sickening head knock.

Play resumed after a lengthy delay, and the Bloods capitalised on their opponent’s lethargy, adding four more goals to close out the half five points ahead.

Things went from bad to worse for the Dingoes after the yellow-carded Ryan Stewart was given his marching orders in the third term, but they nevertheless dug deep to register the only two goals of the term despite losing two rotations.

Mordi reclaimed the lead with consecutive goals midway through the final quarter, but Dingley finished with three of their own to claim a brave victory and the beyondblue Cup.

Dingley skipper Tony Lavars was simply outstanding in his 250th game, finding plenty of space and a heap of possessions, which he used with superb efficiency. Trav La Rocca and Jack Ades were also influential.

James Morris’ four second-term goals got Mordialloc back in the game, while Josh Jewell did a sparkling job on dangerous Dingo Cal McQueen. Dingley skipper Tony Lavars is chaired off the ground by teammates after playing a starring role in his 250th game.[/caption] A scintillating opening term that yielded five unanswered goals laid the foundation for the impressive Rosellas, who run out comfortable winners 7.8 (50) to 3.8 (26) despite being held goalless in the second and third terms.

Youngster Jackson Kilner was most impressive for Cheltenham, booting three goals in a fine display, while Mitch Daniels and Luke Brookman were also prominent.

Luke Casey and Brent Crawley stood out on a dirty day for the Oaks.

Bentleigh once again claimed bragging rights in the local derby after a 9.10 (64) to 4.7 (31) triumph over rivals St Pauls at McKinnon Reserve.

The Demons were never headed, holding the Dogs at arm’s length in a hard-fought and low-scoring encounter.

Youngster Jayce Morgan had a breakout performance for the visitors in just his third senior game, while Sam McGarry was similarly industrious.

Justin Hall was also a tower of strength in the Bentleigh backline, which conceded just four goals for the day.

Reigning Ellis Medallist Liam Wilson played his best game for the year, but it was defender Trent McIntyre that was named St Pauls best.

The Clays were in control from start to finish, with 12 first half goals ultimately proving the difference.

Andy Ray was again a prolific ball-winner, and impacted the scoreboard with three goals in a clear best afield performance. Chris Morrison was also in the thick of it, while the Scanlon boys, Nick and Dean, shared five majors.

Aaron Purvis marked his return to the St Kilda City side with a brilliant individual effort that included five goals.

The scoreboard in the final game was again difficult reading for East Brighton die-hards, with East Malvern keeping the Vampires goalless in the 14.17 (101) to 0.2 (2) rout in tough conditions at the Zoo.

First-year Panther Jack Crameri booted half a dozen goals to claim best afield honours, while Lachie Downling and Matt Terech were also conspicuous for the winners.

The Vampires, much more competitive around the contests than the previous week, were well served by Tom Jessup and Barry Hope.

A new team sits on second on the ladder after what was otherwise a very uneventful weekend of football in Division 2.

This game never really looked in doubt as Hampton rocketed away with an enthralling five-goal opening quarter. The game finished with the Hammers taking home an 80-point victory with Justin Isaacs and Tom Burley combining for 11 goals and Damien Armansin continuing his good form of late with another best on ground performance. Hampton only led by 30 points at half time but blasted away in the second half, kicking 10 goals to three for a victory that keeps them very much in finals contention.

A stunning win for the Heighters has moved them into second spot on the ladder in a match that, for three quarters, lived up to the hype. Lachlan Dobson bagged four goals while Jarryd Uren put together his best performance of the year in the 29-point win. Chelsea Heights had the better start of the two sides and transformed an eight-point quarter time lead into 19 points at half time. Caulfield narrowed the margin to 12 points at the final change but the Heights finished strong with four goals to one to secure the win.

A sensational four-goal best on ground performance from Brett Dawson has lifted the Bombers to a 40-point win against Keysborough, ending their losing streak and ending the Burra’s finals hopes in the process. The game was hotly contested with Skye leading by seven points at the first change but a five goal to one second quarter set up the victory. The second half was nothing to write home about with the Bombers wasting several opportunities in front of goal but they did enough for their seventh win.

Another incredible attacking effort from the Colts keeps their unbeaten streak alive with the victors finishing with 10 individual goal kickers, with three players finishing with four majors. Lewis Mildenhall was best on ground in the match, leading from the front as Port Melbourne pulled away to a 50-point lead at half time off the back of a seven goal to one second quarter. The Beena were much more competitive in the second half, kicking eight goals, but the Colts were simply too good kicking 10 goals in reply to walk away with win number 11.

The losing streak is over. Springvale has won for the first time in two months with what turned out to be a comfortable victory against Heatherton. Sam Blackburn bagged two goals in a strong best on ground performance while Justin Lim and Matthew Thompson also finished with two majors. Springvale won the early battle to lead by seven points at half time in a low scoring game, but burst away in the second half piling on seven goals to two to finish 34-point winners.

In a strange round, not one home senior team in the division won.

Daniel Morrison played a big part in helping Endeavour Hills to a one-point half time advantage against Mount Waverley. He had four goals by that stage.

The Mountain Lions were in front at the last change, but by less than a goal. They extended their unbeaten run with five majors to none in the final term, to run out 30-point winners.

Michael Keem was best for Mount Waverley, whilst James Gough kicked six goals to move to 54 for the season, one behind his teammate Luke Galle.

Having lost by over 300 points last week, it was hard to imagine Sandown mounting a challenge against Ashwood.

It proved a commendable effort from the Cobras against a side that should play in the finals. Sandown clung to a four-point lead with a term to go.

That lead was achieved with a seven goal to two opening term. The Cobras failed to score a major in the second quarter and added just one in the third.

Although Ashwood went on to claim a 24-point victory, and the Cobras couldn’t score in the fourth quarter, it was nonetheless a valiant effort.

Abachez Matthias was the winner’s best, with Dale Carroll continuing his good form with three goals for the Magpies.

Seven last quarter goals from Doveton shook off Hallam, which had led by five points at three quarter time.

Adam Read again helped fill the void left by the injured Peter Dye. He kicked four goals and was the Eagles’ best player in a 35-point win.

Hallam fell out of the five for the first time this season.

Dylan Cott has played every game of the season for Carrum Patterson Lakes, without previously being mentioned in the side’s best players.

He had not booted a goal either, but made Dandenong pay as his four majors helped earn him recognition as CPL’s best player.

The Lions were in control throughout the day, leading at every break and recording an eight-goal victory.

Another noteworthy performer for CPL was Justin Olaman who managed five majors.

Moorabbin showed fight in the first half to go to the main break just nine points behind Lyndale.

The Pumas’ superiority then came to the fore as they dominated the second half, setting up a 54-point win.

The match was close all day and was characterised by tackling pressure, with numerous ball ups and throw ins.

In the tense final minutes of the game Lyndhurst led by one straight kick.

Matthew Shannon took a mark with 21 minutes elapsed and it mattered little that his kick resulted in a behind.

With the ball in Lyndhurst’s forward line and the advantage stretched to seven points, the job was beyond South Yarra.

That was the final score of the match, sending the Lightning players into rapturous celebrations, and Shannon was named their best.

Round 10 commenced with two premiership contenders kicking mammoth scores to have comfortable wins. Despite inaccuracy of 46.37 (313) between the teams, St Pauls and St Kilda City cruised to 137 and 119-point victories over East Brighton-Bentleigh and Carrum Patterson Lakes respectively. Impressively, both sides share their goal kickers quite evenly with no major standouts on their way to both sit inside the top four.

Similarly to the Lions and Vampires, Highett have had an indifferent start to the 2016 campaign as they were defeated by 48 points against Hallam. The margin was 25 points heading into the final change but any small hope the Hawks had was initially dashed as Mitchell Jeffery ended with three majors for the winning side. HIghett are still chasing that elusive victory and get their chance next week when they face a weakened Carrum Patterson Lakes outfit. For Hallam, they have positioned themselves well prior to the bye and will be looking to continue this form for a genuine tilt at the premiership.

Elsewhere, Endeavour Hills won a significant battle with Dingley as they outclassed the Dingoes with 24-10 scoring shots in their 34-point win. The Falcons managed 16 behinds to keep the margin within 19 points at the final break but broke away during the final term. The ever-consistent Hayden Favero bagged another three goals for his side and now has 21 for the season. Favero has been an integral aspect of the Falcons’ ability to stay within reaching distance of finals positions.

Cheltenham were considered an even chance of winning Saturday’s fixture with Oakleigh District. However, Oakleigh sent a warning to their biggest rivals. As the top five begins to take shape it is vital for players to up their game at this stage of the season. And for Oakleigh, they managed to do so on their way to a 37-point victory.