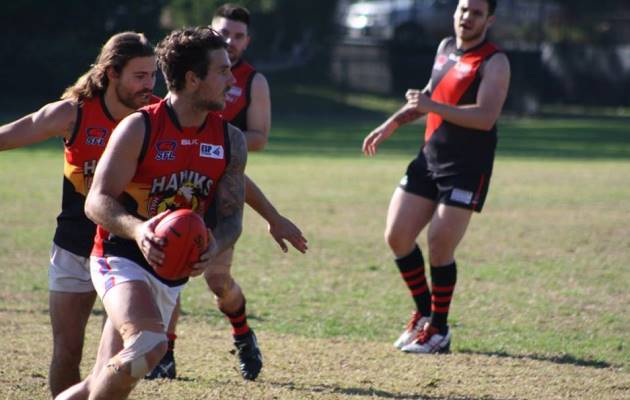 Listen to the podcast of Sunday's The 5th Quarter, featuring South Yarra coach Darren 'Daisy' Stegehuis as the special in-studio guest, in the player above.

Springvale Districts was the big winner in Round 9 Division 2 action, causing the biggest upset of the year, while top three hopefuls Caulfield and Keysborough took advantage.

The upset of the season so far, the Districts have played spoils on Skye’s good form, defeating the Bombers by five points, dropping them from second on the ladder to fourth.

It was the first win for new Springvale coach Kris Thompson, who replaced Danny Rout who stepped down due to work commitments.

It has been a whirlwind week for Thompson, who broke his leg during the Round 8 clash against Hampton, but got out of hospital in time to coach against Skye.

It was a crucial win for the Districts, who now jump a game clear of bottom placed Heatherton, overtaking Highett on percentage in the process.

Stephen Hawkins and Brett Dawson each kicked three for Skye.

Keysborough moved into the top three following a big win against East Brighton, the result of a strong four-quarter performance.

Tim Werner was the star up forward for the Burra, booting five goals including three during a stunning 11-goal to one first half while Ryan Goodes was also impressive.

Keysborough was still relentless in the second half despite the big advantage, booting six goals to four to claim a 71-point win.

Murrumbeena remained in touch with the top five after an excellent 31-point win against Mount Waverly despite giving up nine goals in the final term.

Murrumbeena was the better team through three quarters, converting a 32-point half time lead to 60 at the final change.

The Beena led by 80 points in the final term before the Lions, led by Joe Rickard, booted nine unanswered goals with Rickard kicking six of them.

Rickard was the Lions leading goal kicker with six while Jackson Smith was named their best.

The Bears needed three quarters to click into top gear before nailing the Hammers by 57 points, and jumping into second spot on the ladder.

Led by four players with two goals each, Caulfield overcame a poor first quarter, which saw it register just one behind, to lead by two points at the main break.

The Bears were impressive in the third term, keeping the Hammers scoreless while booting three goals themselves before powering home in the final term with seven goals to two.

Dan Guiry was named Hampton’s best in the loss.

The Heighters remain undefeated on top of the Division 2 ladder following an overpowering second half performance against Highett.

The ladder leaders trailed by five points at the half time break, but roared into action in the second half, slamming home 13 goals to just two to register a 68-point win.

Phil Smith was influential inside 50 with five goals while Phil Matheson and Joel Williams were impressive with their efforts.

After trailing by three points at quarter time, the Dogs came back with four goals to two in the second term to carry a five-point lead into the main break.

The boys from Beazley Reserve clicked into gear after the break however, booting six goals in the third and seven goals in the last to secure the win.

South Yarra led at every change against Endeavour Hills.

The Yarra’s 19-point quarter time advantage was the most between the teams at any break.

Zac Maher was South Yarra’s best in a 17-point win and kicked a couple of goals.

Enayte Samadi booted five majors for the winner, whilst his skipper Corrie Wilson was best afield.

Lyndhurst’s David Ford was best on ground in Lightning’s 114-point thumping of Sandown.

There were plenty of contributors to Lightning’s goal tally with Jarryd McGrath leading the way with three.

It was a gripping finish at MacDonald Reserve with Hallam finishing strongly despite being a player short.

Peet had to be removed from the field.

Earlier skirmishes between the sides prompted an umpire’s warning players needed to calm down or someone would be sent off.

Hallam’s Shane Thomas was a central figure in the day’s drama.

His bright blue hair attracted the attention of opponents and spectators alike.

His crunching tackle 26 minutes into the final term caused the ball to spill to ground.

Thomas seized the footy, running, bouncing and nailing the goal that put the Hawks’ win beyond doubt in the club’s 100th senior game.

The Kangaroos won by 46 points.

Their coach David Velt had the services of son Nick Stanlan-Velt who has been playing in New South Wales.

He contributed four goals and was named the winner’s best.