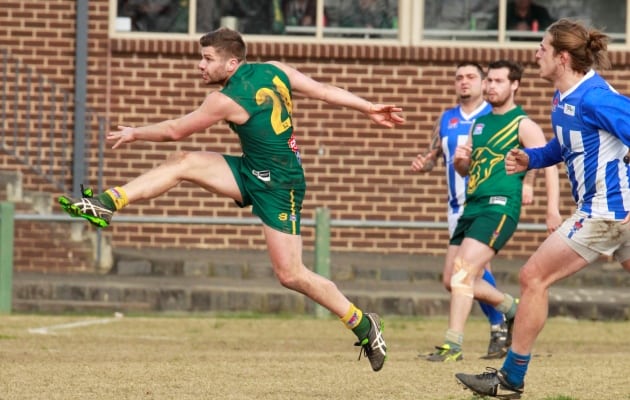 The Division 1 season’s penultimate round produced largely lop-sided results as the top teams staked their claim for finals berths.

But of the weekend’s blow-outs, none raised more eyebrows than Oakleigh District’s 15.10 (100) to 3.8 (26) thrashing of Mordialloc at Ben Kavanagh Reserve.

The game was expected to be a hotly-contested clash between two evenly-matched teams, however, from the outset the third-placed Bloods were simply never in the contest.

The Oaks came to play from the opening bounce and a five-goal opening stanza had them well ahead at the first change. By halftime the home side had yet to register a major and the four points were all but destined for Oakleigh.

The Districts proved too good for the Bloods in all facet, with winners on every line including Ryan Pearson, Simon Black and Under 19 star Liam McCabe.

Live-wire Khaled Kandakji provided the spark up forward with five goals, which helped his side extend its lead at every change.

Simon Fragiacomo, Rowan Andrews Luke Barnhoorn were again among the standouts for the disappointing Mordialloc.

The Bloods’ heavy defeat now puts its place in the finals in jeopardy, while Oakleigh District now has a golden opportunity to snare the double chance.

Meanwhile, Dingley atoned for its recent fortnight of disappointment by belting East Malvern 21.12 (138) to 6.9 (45) at Dunlop Reserve.

After losses to Oakleigh and Bentleigh in consecutive weeks, the Dingoes were back to their merciless best, and in the process wrapped up the 2016 minor premiership.

The Dingoes had eclipsed their previous week’s score by the six-minute mark of the second term with their eighth goal of the match, by which stage they were 36-point leaders.

With Chris Morgan, Marcus Freeman and debutant Josh Ellis all finding plenty of it, the Dingoes regained their ruthless edge, slamming home the final six goals of the match to signal a welcome return to form ahead of September.

Pleasingly for the winners, spearhead Calhan McQueen made his return from injury and was one of six players to slot three goals.

The Panthers were again well led by Jimmy Dowling and Nick Barry.

In the closest game of the round, Clayton overcame a spirited St Pauls outfit in a low-scoring, scrappy contest at McKinnon Reserve, 7.12 (54) to 5.6 (36).

Little separated the two sides for most of the afternoon, despite St Pauls failing to register a goal in two of the four quarters. However, the experience of the Clays in the latter stages ultimately helped them secure the four points and keep them right in the mix for a finals berth.

In the end Lee Boyle proved the difference with three goals for the winners, while Andy Ray, Matt Wilson and Daniel Kirby also stood out.

Although the result has been an all too familiar story for the Vampires this season, they were, to their credit, competitive in the early stages of the game. They had booted five goals to half time and trailed the second-placed Demons by just 32 points.

But Bentleigh put their foot down in the second half on the back of some stellar work from Kayne O’Brien and Kade Heaphy-Wemyss, piling on 10 goals to two in a dominant display.

Paddy Nicholls and Saam McGarry slotted nine majors between them while the usual suspects in Mark Jamieson and Barry Hope led the Vampires’ resistance.

The Rosellas cut loose after a tight opening term, booting five goals to one in the second quarter to race to a 37-point half time lead.

And it was one-way traffic from that point on. Cheltenham led the Saints on a merry dance, restricting them to just one goal in the second half as they motored away to a near triple-digit demolition.

Matt Zacharin did the damage up forward for the winners, booting four goals, while Anthony Milesi and Daniel Vaughn were also prolific around the ground.

The penultimate round of Division 2 action provided the Southern Football Netball League with plenty to think about going into the last round of the home and away season this week.

The Heighters were just too good for the Bombers on Saturday, kicking eight goals in both halves to run out with a comfortable 72-point win. As he has been whenever he has stepped out onto the field this season, Phil Smith was the difference up forward with five goals while Lachlan Dobson (four goals) and Phil Matheson (three goals) were also dangerous when Chelsea Heights went into attack. Joel Williams was named as best on ground while Jordan Peryman and Matt Johansson were also impressive. Chelsea Heights broke away early in the match with five goals in the third quarter, adding another three in the second to lead by 37 points at half time. Skye didn’t have an answer for Chelsea Heights’ intensity towards the ball and while the Bombers were able to register four goals in the second half, the Heighters bagged another eight to finish easy winners.

Caulfield moves back into three spot on the ladder after an important victory against Highett and will be nearly assured a top-three finish come finals time. Josh Wood was named best on ground for his impressive efforts while Nick Gilbert was back to his best just in time for finals, finishing with two goals. The Bears started strongly with four goals in the opening term to lead by 10 points at the first break before Highett closed the gap to seven points by half time. The Dogs went to work in the premiership quarter, kicking three goals while keeping Caulfield goalless to take a 14-point buffer into the three quarter time break. Caulfield found its best form in the last quarter however, bagging five goals to one to finished 12-point winners.

The Tonners secured their fifth win of the season with a comprehensive victory against the Rockers in a match that was rarely in doubt. Matt Jamieson and Matt Van Schajik each bagged three goals with Van Schajik judged best on ground for his efforts around the contest. Heatherton took advantage of a six-goal second term to build 44-point lead at half time and while the second half was a little lacklustre in terms of scoring, with the Tonners kicking four goals to two, the lead continued to stretch until falling on the winning margin of 63 points.

Hampton had to fight for its eighth win of the season but held on despite plenty of pressure from Keysborough in what turned out to be one of the matches of the round. Justin Isaac, Rhys Pierce and Lachlan Batt each finished with two goals for the Hammers while Jye Sujaini was named best on ground. Hampton trailed at quarter time by two points before lifting in the second term, bagging four majors to Keysborough’s two to hold a 14-point lead at the main break. The Burra hit back in the third quarter with another three goals while restricting the Hammers to just one goal before Hampton stormed home with two majors in the final term to seal an 11-point triumph.

In the upset of the round, Springvale Districts put a minor dent in Murrumbeena’s finals hopes with a confident 20-point victory at home. Five players each bagged five majors for the Districts while Tristan Potts and Ben Stacey were impressive in their efforts throughout the contest. Springvale rarely looked troubled throughout the match, opening up a 27-point lead going into half time, which was slightly reduced to 25 points at the final change. Murrumbeena was able to register the only major of the fourth quarter but it wasn’t enough to get it across the line.

Hallam ensured it will participate in the finals series, dashing Endeavour Hills’ hopes of doing so.

Manny Peresso’s class was again on display as Hallam's best in the 28-point win over the Falcons.

Shane Thomas was the winner's most productive goal scorer with four.

Four goals from Dale Carroll and a strong performance from Jake Chapman that saw him named Ashwood’s best, helped lock in the double chance for the Magpies.

The side entertained its home fans with a four-goal win over Lyndale.

Dandenong made a decisive break on Sandown in the third term of a low-scoring contest.

The Redlegs took a lead of 15 points into their final quarter of the season and prevailed by a goal.

Anthony Salomon was the winner's best and Dale Jose and David Barrie each kicked a couple of its goals.

Mountain Lion James Gough reached the milestone of 100 goals for the season, ensuring this won't create a distraction for his teammates during the finals. James Gough put through goal number 100 for the year.[/caption] Luke Galle is first to congratulate Gough after he gets his ton.[/caption]

With dashing youngster Ricky Johnson its best player, Doveton prepared for finals with a fifty point win over Lyndhurst.

South Yarra’s inaccurate goal kicking was a non-issue against Carrum Patterson Lakes, with CPL able to manage only one goal all day.

The Yarras’ winning margin was 45 points.

Kieron Finlayson was the winner's best and Jordan Cellini its only multiple goal scorer with two.

The penultimate round of the regular season saw two significant results. In addition, sides cemented their finals standing while the bottom teams will be looking forward to the final game of the year.

Firstly, St Kilda kept their minor premiership chances alive with a miraculous win over Cheltenham in one of the best games of the round. Trailing by 22 points at the main break, the Saints slowed Cheltenham’s scoring and had almost eradicated the margin entirely by the final change.

In a tense and finals-like battle, the Saints completed the comeback by five points – 76-71. Josiah Laakulu’s four-goal haul was pivotal in his side’s second half display while Jackson Kilner and Tom Davis booted three goals apiece for Cheltenham.

The other major result of the round came between Hallam and Endeavour Hills. The Falcons needed to win to keep their slim chances alive and managed to do so by nine points. The result has had a massive impact on the Hawks as the 40-31 loss means they are now likely to miss finals.

Essentially, both sides will be heavily reliant on results to go their way. Cheltenham needs to beat the Vampires. If they don’t, they may be susceptible to losing their place as Hallam face Hampton and Endeavour Hills play Dingley. Ultimately, it is very unlikely Cheltenham will lose their spot, but stranger things have happened!

Elsewhere, St Pauls claimed a comfortable win in what was a tricky fixture. Despite a percentage that can compete with the top sides of the competition, St Pauls sat in a precarious position prior to this game. The Bulldogs won by 68 points in a strong showing that puts them in a good place for when they play Oakleigh in the last game of the season. With the top three settled, St Pauls are expected to finish in fourth position ahead of Cheltenham on the ladder.

East Brighton-Bentleigh didn’t let inaccurate kicking halt their charge to a 63-point win over Highett. Despite managing 11 goals and 18 behinds, the Vampires provided a strong team performance to move clear of Carrum in ninth place on the ladder. The effort is staggering considering their troubles prior to the season. For Highett, they’ll be looking forward to 2017 as they have the bye in Round 18.

Finally, Hampton’s incredible performance against Carrum cannot be ignored. The Lions only managed to score one behind for the game while Hampton had 57 scoring shots on their way to a whopping 241-point win. The result almost guarantees top position and a week off in the opening week of finals.