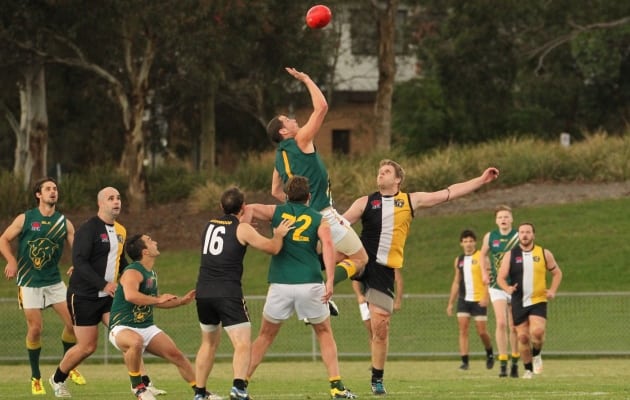 Clayton’s remarkable mid-year resurgence has continued, upsetting the fancied Bentleigh by 18 points at Bentleigh Reserve, 9.12 (66) to 7.6 (48).

In doing so, the Clays leapfrogged St Pauls to occupy a spot in the top five for the first time since Round 1.

It was a hard-fought battle for most of the afternoon, with neither side able to gain a decisive advantage in the early stages. The scores were level at the half, with the home side’s accuracy in front of the sticks keeping them in the contest.

But the Clays lifted after the main break, with a five-goal third term giving them the upper hand. Their ferocious tackling pressure has been a feature of their game in the last few weeks and was again a decisive factor on Saturday.

Gabby Irons and Aaron Mills were sensational for Clayton, but skipper Jayden Gilmour was the clear standout after his blanket job on Bentleigh star Pat Nicholls, who managed just one goal for the afternoon.

Robbie Palazzolo was at his industrious best up forward, slotting three goals for the winners.

The Demons were well served by Kayne O’Brien and Tom Backman, while Matty Troutbeck finished with two goals.

Meanwhile East Brighton played their best game for the year, running Cheltenham all the way at Widdop Crescent before falling 18 points short, 12.10 (82) to 10.4 (64).

The winless Vampires were in the hunt all afternoon, and with just nine points separating the combatants at the final change, an upset was on the cards.

However, the youthful and inexperienced East Brighton outfit were hurt by crucial errors at critical junctures of the game, and lacked the required polish at the end to secure the victory.

The Rosellas capitalised on the Vampires’ errors, booting four final-term majors to notch their fifth win of the season, with Tom Nelson, Jack Worrell and Jake Davis (three goals) all influential in the result.

Oakleigh District have kept themselves in finals contention with a narrow 7.12 (54) to 7.4 (46) victory over top three contender East Malvern at Princes Highway Reserve.

The Districts got the jump over the injury-ravaged Panthers early, and by half time had extended their lead to five goals.

With Andrew Johnson, Nathan Robinson and Nick Barry all prominent, they nearly pinched a tremendous come-from-behind-victory, but Oakleigh held off the fast-finishing Panthers in a tense final term.

The Districts’ big-name stars in Andy Howison, Paul Fermanis and Brody Hodic were crucial in their triumph.

The match was far from pretty, with neither side seeming to hit top gear.

But the Bloods were the better side from quarter time onwards, capitalising on St Pauls turnovers to break the game open and record a hard-earned victory.

Liam Wilson and Jay Ting stood out for the disappointing Dogs.

The final game saw Dingley keep St Kilda City goalless after quarter time as they recorded a comprehensive 15.17 (107) to 1.4 (10) win at Souter Oval.

This was a contest the Saints never looked like winning as the Dingoes dominated in all facets of the game.

Jimmy Ball and Jackson Peet were the standouts for the winners while Cal McQueen was the chief destroyer up forward with his third consecutive six-goal haul.

The surprises seemed to never end in an action packed Round 15 of Division 2 with several upsets arising in sometimes sloppy conditions.

Skye are back inside the top four after a resounding victory against Caulfield, at the home of the Bears no less.

Tim Barr starred for the Bombers while Michael Kelly and Aaron Harper each bagged two majors in a match that saw Skye produce a remarkable defensive effort against one of the competitions best scoring sides.

The Bombers were held scoreless in the opening term but the Bears piled on two goals, but the rest of the game went in the opposite direction as Skye held Caulfield to just one goal the remainder of the match, while booting 10 itself to run out 44-point winners. Listen back to the SFNL Radio team’s call of the Caulfield V Skye game in the player below.

The Beena moved into fifth spot on the ladder following a comfortable win against the Rockers, a result of a blistering start to the match.

Murrumbeena jumped out to a 21-point half time lead with the likes of Harley Turkington and Mitch Walder (two goals each) looking dangerous inside 50 while Cory Hargrave and Jarrod Walker were prominent in their roles on the ground.

Black Rock improved in the second half but Murrumbeena never relinquished control on the match, booting another five second half goals to register the win.

Another day, another Port Melbourne win and again the Colts did it with ease, defeating the Dogs by 57 points.

Jason Butty, Matthew Dumbleton and Brad Sutcliffe each bagged three goals while Blake Twomey was best on ground in another stirring performance for the Colts.

A tight first quarter was followed by a six-goal effort from Port Melbourne leading into half time.

The third term was another even affair before the Colts steamrolled to victory in the final stanza, registering another four goals to claim the win.

Clearly the upset of the round see Chelsea Heights go down to a deserving Hampton side who remain in the finals race.

Todd Burley was the difference maker up forward with a bag of three goals while Damian Armansin continued his stunning form of late with yet another best on ground performance.

In a scrappy contest, the Hammers kept the Heighters scoreless in the second quarter to lead by 13 points at half time.

The second half was equally as tightly contested, however, the game was prematurely ended in the fourth quarter after an unfortunate injury to a Chelsea Heights player resulted in a lengthy delay in play. Hampton were in front by 10 points at the time the match was stopped.

The Tonners can book their tickets for Division 2 next season after working their way to victory against Keysborough by 22 points.

Heatherton enjoyed a solid four-goal first quarter to obtain the advantage but the game was a bit lacklustre from there on in difficult conditions with both sides only able to put through two goals each after quarter time.

Jesse Stone was best on ground for the Tonners while Matt Van Schajik and Michael Bruce each nailed two majors.

When Mitch Saunders kicked the game’s first goal it was the beginning and the end of the good news for Ashwood.

In the 200th game of Mount Waverley co-captain, Jarrod Wilkin, the Mountain Lions kicked the next 14 goals.

The promise of an intriguing contest between the top-of-the-ladder Mount Waverley and third-placed Ashwood quickly vanished, and the Mountain Lions charged home by 107 points.

James Gough booted six of the Mountain Lions’ goals and Jackson Smith was best on ground.

Endeavour Hills charged out of the blocks, booting the first four goals of the contest against Lyndhurst. By quarter time the Falcons led by 32 points.

Lightning pulled the deficit back to 19 points at the major break, but that was the only term it had the better of, as the Falcons again took charge in the second half to double their opponent’s score in a 41-point win.

Jayson Bruce was the best player for the Falcons and his teammates Ben Graham and Daniel Morrison booted three majors each.

Showing real character, underdog Sandown took it up to Lyndale, trailing the Pumas by just three points at half time.

The Cobras were unable to sustain this competitiveness in the second half as Lyndale completed a seven-goal win.

Trevor Kumetaitis was in the action for the Pumas with six goals and was named the winner's best, whilst Dale Tormey managed five majors.

Dandenong kicked a lonely goal for the day, succumbing to South Yarra by 44 points.

It kept the Lions’ finals hopes alive, but does little to suggest they will be a major threat to the top teams.

The reliable Jordan Cellini was South Yarra's best player and kicked a couple of goals as did fellow Lion, Cory Brady.

After a terrific start to the season, Hallam has fallen away in recent weeks, but was untroubled in dispatching Moorabbin.

The Hawks prevailed by 91 points, with the resultant percentage increase sufficient to propel them back into the top five.

Hallam's Matt Neve was best on ground with six goals.

The gap between the sides near the top of the ladder and those on the lower rungs was starkly illustrated as Doveton restricted Carrum Patterson Lakes to one goal for the match.

Even in the absence of Peter Dye, Doveton has plenty of firepower and appears the most likely side to challenge Mount Waverley in the finals.

Round 13 was another opportunity for teams to make their charge toward a finals campaign. Oakleigh District had the bye, St Kilda City were upset and many others continued their emergence as contenders. It is becoming clear which sides are in contention.

Separation is occurring on the ladder and ultimately we can confirm seventh-placed Endeavour Hills are the last team in the running for a finals place.

At the lower end of the table, Highett and Carrum Patterson Lakes continue their battle to move away from the wooden spoon. Highett, while having the more competitive week of the two, still remain on the bottom following their 76-point defeat to East Brighton-Bentleigh.

For Carrum, they were outclassed by Hallam 139-2. The Lions, despite winning their opening game over Highett, were unable to register a goal and the result was ultimately more significant for the Hawks. They now sit in fourth place and have a genuine chance at winning the premiership.

Because of these results, it leaves East Brighton-Bentleigh, Carrum Patterson Lakes and Highett with two, one and zero wins respectively. Similarly, Dingley's unfortunate defeat leaves them stranded in eighth on the ladder with three wins. They are a further three wins behind Endeavour Hills and finals chances appear to be gone. Their opponents, St Kilda City, have solidified their position in the finals race.

Endeavour Hills were the big movers of the round and are positioning themselves for a finals tilt after a comfortable 46-point victory over St Pauls. There were no major goal kicking hauls but Sam Walters’ three-goal effort proved to be important to the result.

Finally, Hampton’s victory over Cheltenham was a very tight contest which the Hammers were able to win by 11 points. There were only eight goals total for the contest and Hampton’s five-goal second half was timely.

The results have confirmed a seven-horse race for finals positions as we head into the pointy end of the year.