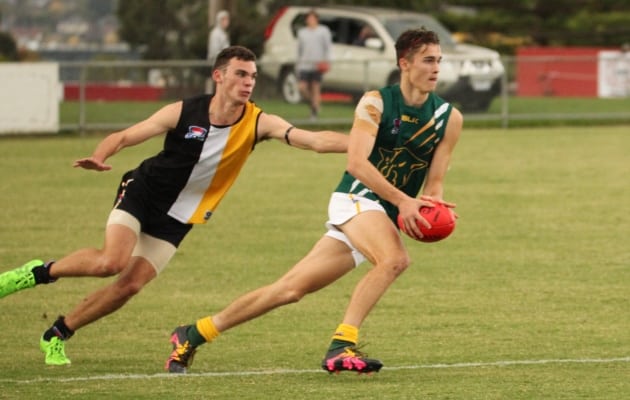 A spirited opening term sent a scare through the Bentleigh camp on Saturday, but it wasn’t enough to secure Cheltenham the four points at Jack Barker Oval.

The Rosellas were switched on from the outset, booting five of the first seven goals of the game on the back of some fluid ball movement through the midfield to race to a 19-point lead as time-on approached in the first term. However, it took until the 14-minute mark of the third quarter for them to register their next major as Bentleigh wrestled back control of the game after the long break on their way to a 13.14 (92) to 10.10 (70) victory.

All eyes were on former Cheltenham forward Pat Nicholls in his first outing against his old side, and although there was little love lost between he and the Rosellas fans, Nicholls silenced them with four telling goals.

But it was Andrew Walsh’s best-afield performance in the ruck helped sway the game in favour of the Demons, and allowed his teammates to dominate possession through the midfield. Jackson Meredith and Scotty Lawry found plenty of it, while young Saf Balic was also conspicuous.

Sandringham-listed spearhead Josh Fox was a constant threat in the Cheltenham forward line with his aerial exploits. He booted four goals for the day, including two in the first term, while Jackson Barclay and Jarryd Bloink were also among the Rosellas’ best.

Meanwhile it wasn’t the happy ending East Brighton were hoping for in Mark ‘Jewie’ Jamieson’s 250th game, resoundingly beaten by Mordialloc to the tune of 98 points at Ben Kavanagh Reserve.

The Vampires matched it with the Bloods in a scrappy opening stanza, but the home side gained the ascendancy in the second and never looked back.

Justin Summons and Nick Lawrence were prominent in their side’s 15.20 (110) to 2.6 (18) triumph, while James Morris was the chief destroyer in attack with six sausage rolls for the winners.

The mercurial Jamieson didn’t disappoint in his milestone game, being named his team’s best player, though veterans Andrew Jansen and Barry Hope also stood out for the rebuilding Vampires.

Oakleigh District continued its positive start to life as a Division 1 outfit, running out 11.7 (73) to 6.9 (45) winners over St Kilda City at the Peanut Farm.

An entertaining albeit low-scoring battle for the first three quarters, the Oaks managed to break the shackles and run away with the game on the back of a five-goal-to-two final term.

Key defenders Brody Hodic and Pat Carroll were pillars of strength down back, while Ryan Pearson and Rob Edwards did the heavy lifting in the District’s engine room.

The final game of the weekend saw East Malvern retain the Sir John Monash Cup in their traditional ANZAC Day clash with Clayton at Dunlop Reserve on Monday.

With less than a kick separating the two sides at each of the first two breaks, the Panthers then managed to pull away in the third to record their second win of the year, 12.16 (88) to 6.10 (46).

Robinson, Ed Sim and Andrew Johnson were instrumental in the victory, particularly in the second half.

Andy Ray was again terrific off half back for the vanquished Clays with support also coming from Xavier Deayton and Darcy Kingsbury.

Southern Football Netball League action for Round 3 is done and dusted and the ladder is beginning to take shape with a clear favourite on top.

In a battle between two winless teams, Springy got its first victory of the season in a hard fought clash with the Jets at McDonald Reserve. Billy Green was impressive in a best on ground performance for Springvale Districts while Lachlan Morrey bagged a game-high three goals for the Demons in a game which saw Springy pull away in the second half. With the game all square at half time, the Districts kicked four goals to two in the second half to record the 13-point win.

The Colts juggernaut keeps rolling on as they claimed a commanding 114-point win over the Burra in a thoroughly one-sided affair. Jackson Brown bagged four goals in a best on ground effort while Mitch Clark, Brad Sutcliffe and Robb Jewell combined for 10 goals in the win. A 12-goal first half from Port Melbourne set up the win as its midfield dominated the stoppages all afternoon and although key forward Jason Butty was quiet (two goals), the Colts impressive forward line continued to be dangerous.

The Bombers had to work hard to defeat the Tonners on Saturday, coming from 29 points down at quarter time to record the 21-point victory. Skye had nine different goal kickers in the win while Jordan Thomas played his best game of the season on the wing racking up plenty of possessions. Heatherton started like a house on fire with five first quarter goals but could only manage four the rest of the way as Skye stepped up its pressure in the second half. Matt Van Schajik continued his impressive form in front of goals for the Tonners with five majors.

The Hammers got an important victory over the Dogs in a contest that showed you can dominate general play as much as you want but if you can’t kick straight you won’t win a game of football. Todd Crane was best afield for Hampton who had seven different goal kickers on the day and although Highett may have been the better team at different times throughout the match, Hampton showed a lot of poise under pressure and will gain a lot of confidence from this victory.

The Bears continue to their undefeated run with a comfortable 59-point win over a struggling Murrumbeena side. Nick Gilbert and best on ground Jason Twirdy combined for eight of Caulfield’s 16 goals in a game which saw a nine-goal-to-two second half secure the win. Caulfield started the game strongly but Murrumbeena was still in the hunt, only 20 points down at half time. The Bears kicked on in the second half with Gilbert and Twirdy dangerous up forward record its third straight win.

Loyal Ashwood clubman, Michael Langford celebrated his 300th game for the club as his side played Mount Waverley.

After an early goal to James Gough, Ashwood held Mount Waverley scoreless for the rest of the first term.

By quarter time the Magpies led by 15 points.

However, there was to be no upset at Essex Heights Reserve, as the Mountain Lions took control in the next couple of terms.

Ashwood battled hard, outscoring Mount Waverley by a behind in the last stanza, but the Mountain Lions won by 40 points.

Gough stepped up with six majors in this game, and his Mountain Lions’ teammate Luke Galle chipped in with three. Photos from the Ashwood V Mount Waverley game can be purchased HERE.

The Lions prevailed by 25 points.

For the Redlegs, a competitive showing restored much-needed pride after they suffered a flogging in the previous round.

Tom Rogers helped make it a couple of wins in a row for South Yarra and was selected as its best player. Cory Brady was the winner’s top goal kicker with three. Photos from the South Yarra v Dandenong game can be purchased HERE.

Trevor Kumetaitis was best on the field with a nine-goal haul, helping Lyndale to an easy win over Sandown.

The Cobras were already four goals down at the first break.

Lyndale continued building its lead and finished with an 81-point victory.

Doveton Eagles continued the humiliation of Carrum Patterson Lakes, with a 115-point belting.

Nathan Strom and Shane Peake booted three majors each as Endeavour Hills put Lyndhurst in its place with a 62-point win.

Were it not for inaccurate kicking, Endeavour Hills would have enjoyed a much bigger win.

Moorabbin’s Jack Williams continued to impress in front of the sticks, adding seven goals against Hallam.

Surprisingly, this was in a losing cause as Hawk, Phillip Ward booted five and teammate Shane Thomas managed four.

Such is the improvement from Hallam this season, even these performances were deemed insufficient to be named the Hawks’ best. That honour fell to Matt Neve.

With one fixture from Round 2 having already been played between St Pauls and Dingley, eight clubs went into battle for week three of action.

Carrum Patterson Lakes’ sudden return to the competition pitted them against the high-flying Hawks at the Roy Dore Reserve. The Lions were always faced with an uphill battle as Hallam ran out 155-point winners. On a positive note, Carrum managed to kick three goals from three different players during the second half with Alex Wilson managing to kick one of the majors to be one of the side’s best players on the day. For the Hawks, it was a team effort as they had 11 goal kickers for 27 goals with Elijuh Mustapha and Dylan Grayson the standouts kicking six and four goals respectively.

Elsewhere, St Kilda City led from start to finish against Oakleigh District in what was the closest match of the round. The Saints didn’t have it all their own way, but managed to steadily increase their lead with a five-goal-to-nil third quarter. The 44-point margin was reflective of a team performance as Paul Pekaj starred for the second week in a row booting four goals, with strong support from Smith, Dang, O’Donnell and Plummer as each bagged 2 majors. Moreover, Oakleigh were gallant, however it is clear that the absence of Oliver Gabelich and Xavier Pauli – whom pushed for senior selection after stellar Under 19s form during 2015 – hasn’t impacted the premiership credentials of the Saints.

Meanwhile, Cheltenham and Hampton had big wins over East-Brighton-Bentleigh and Highett respectively. Both sides were expected to secure the four points over their respective opposition however the margins were impressive. Cheltenham led by 12 points at the main break which was ultimately a total of 12 behinds separating the sides (3.14.32). Their wayward kicking didn’t prove costly as the final winning margin ended at 81 points. Interestingly, East Brighton-Bentleigh are two games into their merger and despite the heavy losses – there is plenty to look forward to throughout the season. The Hammers also remained undefeated after defeating Highett by 114 points. Hampton were never in danger despite a willing Highett outfit and it was Josh Vitiritti who rose above all to be named best afield following his four-goal performance.