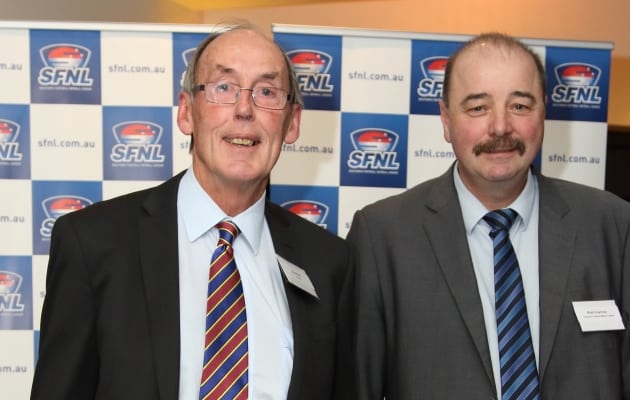 Tweet
Long-serving South Yarra President Bruce Hill has been celebrated for his incredible contribution to community sport when he was announced as a recipient of the prestigious Medal of the Order of Australia yesterday.

The Order of Australia honours, awarded bi-annually by the Governor-General on the Australia Day and Queen's Birthday public holidays, aim to recognise Australian citizens and other persons for achievement or meritorious service.

Hill received his award for his distinguished service to Australian rules football, with his involvement in the game spanning a remarkable five decades as a player, coach and administrator.

And while Hill is overwhelmed with this latest feather in his cap from a personal perspective, he said the award is also fantastic for the legions of volunteers with the SFNL and indeed community sport around the country, who often don't receive the appreciation they deserve for their service to the clubs and the sport.

"You feel proud and you sort of think, 'well, you know, it's good (recognition) for all the hours you've put in'," he said.

"It's good for other administrators in the Southern Footy League and people that I have sort of known that have been secretaries and presidents over the years, they don't get recognised for things like this.

"And it's good recognition for grassroots footy, rather that the top dogs getting all the awards all the time. It's good in that respect."

Hill found out about his award several weeks ago, but kept the news a secret from all except his wife and daughter, both of whom were understandably very proud.

The Medal of the Order of Australia is the latest in a long line of accolades for the legendary community football servant, which also includes induction into the SFNL Hall of Fame, an SFNL Volunteer of the Year award, and Life Membership of the South East Suburban Football League and South Yarra and East Malvern football clubs. However, when asked about his latest honour, Hill was in no doubt where it ranked.

"It'll be top. Definitely above everything else because it's more recognition over the whole community I suppose, or throughout Australia. I think it would be well above anything else I've done," he said.

"It's a bit similar to the Hall of Fame, but the Hall of Fame sort of was in a competition, where I feel this one is more an overall achievement for Aussie rules or local sport in general, more than just the leagues I've been involved in."

Hill will be presented with his medal during a special ceremony at Government House later in the year. Awards and recognition include: