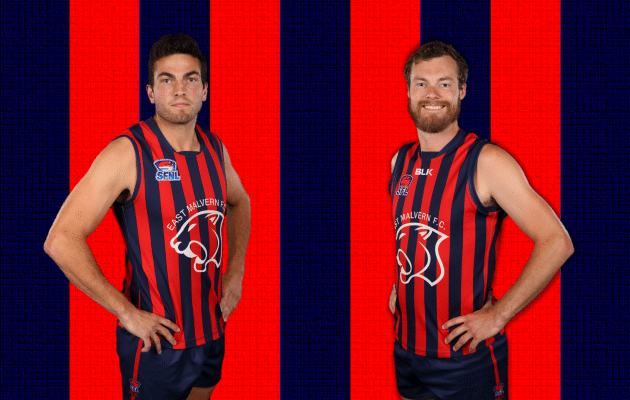 Tweet
The preseason transfer period always generates a fair amount of discussion. The names that appear on the list of League ins and outs helps shape the public’s perceptions of premiership and relegation favouritism.

East Malvern has been one club that has dominated the transfer discussion in 2017, thanks largely to an impressive list of new recruits that will call Dunlop Reserve home this season.

Ex-Hawthorn ruckman Simon Taylor, EFL great Ryan Mullett, Vermont premiership stars Nathan Henley and Dean Millhouse, Drouin B&F winner Luke Duffy and SFNL Interleague big man Brad Neurath will all wear the navy and red stripes in this year, leading many to believe that the Panthers may have one hand on the premiership cup already.

A premature call perhaps – flags aren’t won in April after all – but there is no doubt East Malvern are out to challenge for the incumbent Dingley’s title.

But coach Ben Lockwood was more circumspect when asked about his team’s chances of securing that elusive Division 1 premiership.

“You always go in confident, but I suppose (we’re also) apprehensive. We’ve got to improve a fair bit from last year,” Lockwood said.

“We’ve recruited fairly well, the guys are definitely fitter, we had a pretty good preseason thus far. But we need a little bit of luck with injuries as well.

“We struggled the second half of last year with a few injuries, but if we can get anywhere near our best on the park most weeks, we’re going to be around the mark, which is good.”

The Panthers were in a similar situation this time last year, with several new players including Nathan Robinson and Lachy and Jimmy Dowling tipped to take the team into late September. However, that didn’t eventuate, as injuries took their toll on the side, who were eventually bundled out in the Semi Final by Bentleigh.

Their inability to adequately cover their losses was laid bare, and subsequently depth was as a key factor in their recruiting. This was a part of Lockwood’s long-term plan to develop the club as a whole, and not just chase senior glory.

“(Our) depth will be good. When I took the job 12 months ago at East Malvern it was a club build, not a senior (team) build,” Lockwood said.

“The seconds there for a long time struggled with numbers and depth, but I think this year we’ve probably got 35 blokes that are legitimate senior players.

“So, you know, the act’s going to be making sure they all stay interested, the ones probably don’t get a game early, then have to earn their spot. But if we can keep our list healthy, I suspect both sides will be definitely finals-bound.

Gun midfielder Robinson has himself sensed improvement on the track throughout the preseason, both in numbers and intensity, with the bitter taste of last seasons’ final exit spurring the players on to achieve greater things in 2017.

“I think we battled a bit last year with the depth and stuff, so we didn’t have as many numbers at training, but now with the new recruits I think there is a good vibe around training,” Robinson said.

“Everyone is hungry because last year probably didn’t finish how we would have liked or where we expected. Everyone is pretty hungry to go that next step.

“I think from day 1, when we started preseason, it’s all been about getting fitter, which we needed, and just improving the skills and it’s been ten-fold better than what it was last year.”

With a strong list, a great coach and a burning desire to improve, it would surprise very few if the Panthers were to hoist the premiership cup on that last Sunday in September.