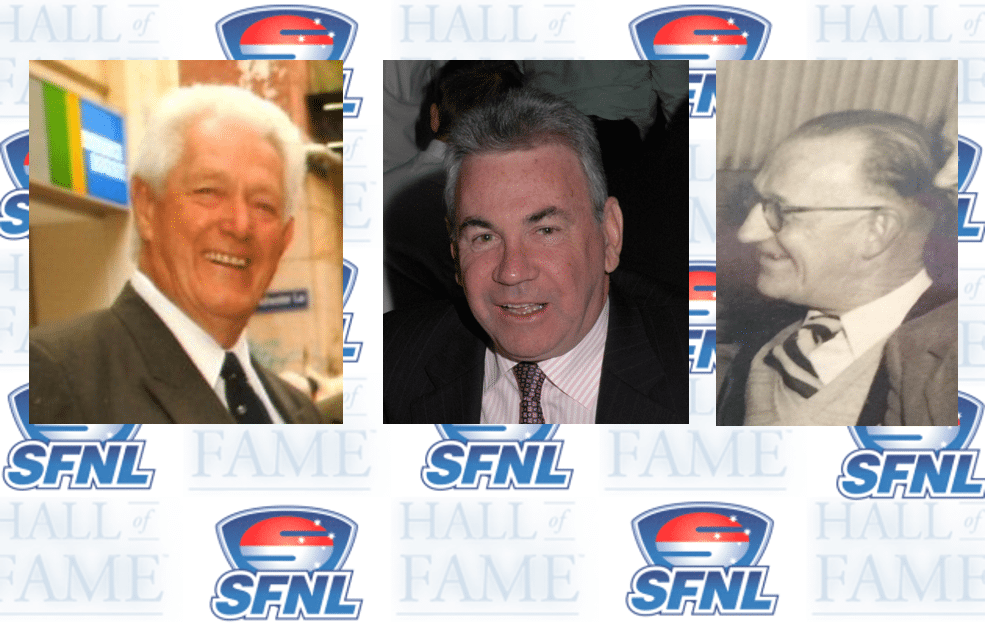 The Southern Football Netball League Hall of Fame will celebrate over 100 years of rich history and acknowledge those who have made significant contributions to the SFNL or the forerunners to the SFNL, being the Federal Football League, Eastern Suburbs Churches Football Association or the South East Suburban Football League

For more information, please click on the event flyer  HERE

Football meant more to Darrell than a game; it was a massive part of his life. Nothing was ever too much trouble when it came to helping the team. Molloy considered his time with the various clubs and leagues as a privilege over everything else.

Darrell shifted into coaching straight after finishing his playing career. He never wanted to miss a beat. He led his Black Rock FC under 18/s to the premiership in 1956. Black Rock were down by seven goals heading into the forth. Mentone had begun baking the cake to celebrate, too soon as it would be, Molloy’s kids came back to snatch victory and the cup.

Molloy is a Life member at Black Rock although he is most known for his dedication and development of the Federal League. He was secretary from 1960-79 then president in 1980. Darrell was honored that he was able to help develop the league. He loved to be in charge and always strived for things to be done the right way.

Molloy was demanding, devoted and fearless. In the committee meetings he would carry a thick briefcase, filled with a dozen pieces of paper. He laid them on the desk as the commander at the head of the table. The catch? He never actually had anything written down and the briefcase was empty. But that didn’t matter; Darrell Molloy was a leader.

A few leadership tricks aside, Molloy was incredibly genuine and sympathetic. His youngest brother, Ivan went blind at age 15. Darrell would often take Ivan behind the goals at local federal league games and commentate the play by play. Not for the praise or admiration, because he loved his family and always wanted the best for them.

Molloy devoted time to supporting the Superules Leagues; he loved to promote the competition for the older players. Compassionate for their cause just as was tough in everything else he supported. Molloy’s decades of efforts in the administration of the Federal League are now being acknowledged. His induction into the Hall of Fame is a tribute to a lifetime of relentless service. Garry Cranny has been involved with the local football community his entire life. Caulfield, Glenhuntly and St. Kevin’s Ormond to name a few. His career from playing into coaching is storied enough but Cranny is most proud to of his administrating.

Cranny is being inducted into the Hall of Fame based on his devotion to local football. With this, he carries a strong passion for the football community in Melbourne’s southeast.

As soon as he left the sidelines for the boardroom, Cranny’s impact was evident.
He oversaw the St Kevin’s - Gardenvale merger forming Caulfield FC in 1993, acting as president until ’99. He’s a life member of the club he helped build, encapsulating the kind of person Garry Cranny is and the character the Hall of Fame is hoping to reveal.

Cranny’s ties to the local football scene go back 40 years. Playing in the Federal League as young as 11. Described as a tough competition with incredible talent it produced many league footballers, disproportionate to the size of the area.

Cranny remembers traveling to Federal games in the back of a furniture truck, where the boys would sit on bench seats with the back door half open. Some things may have changed - but community football is still about mateship. The reason Garry is still involved today.

A short break overseas, a time Cranny describes as his life after footy, didn’t last long. The SFNL was in trouble and needed help. Reluctant at first, Garry raised his hand and in 2006 joined the league’s board.

“Footy had been my life in this area. I wanted to play my part in keeping the Southern Footy League alive,” said Cranny. Now, nearly 10 years later, Garry has seen the resurrection of the league.

“Thanks to a succession of good board people, great presidents, we’ve managed to thrive again.”

With 33 clubs and nearly $1.5million in turnover, the league has never been stronger. “Our business is people … creating an environment where they can prosper, becoming a family,” says Cranny. “The clubs add value to their community, that’s what they’re there for… that’s most important.”

Cranny believes the league gives its players and all involved a sense of belonging. “The power of footy clubs is in the support that they can give people in difficult times,” explained Cranny. “We face so many issues in the community and local footy clubs provide a place where people feel wanted, and encouraged.” Wally Beckwith loved his sport, a key drive for this Australian sportsman. Consistently involved with football and athletics, Wally was a keen runner, umpire and joined every committee that would have him.

A well respected, people person, Wally made the list for one Fitzroy FC game in 1918. After a career ending ankle injury, the debutant never lost his team’s spirit. Decades later he could still be found pre-game in the Fitzroy rooms, often with his young son John.

There isn’t an individual with more dedication to the league and sport community than Wally Beckwith.

His passion for athletic running spanned three decades. The 17-year-old Wally ran for 30 years in the Victorian Athletic League, sprinting up until 1930. Wally won a host of handicapped races. His best result, a third place finish at the Stawell Gift in 1915.

A life member of the Stawell Athletic Club, Wally was no stranger to athletic events in the area. He and the gents’ would often take several days, sometimes three, to drive the to the states west. Wally said that it was because of the ‘bad roads’ that made the drive so long, and definitely wasn’t the various nightspots that delayed them.

Wally always wanted to be involved. The nature of prowess didn’t matter – Wally was going to succeed at everything possible. When football wasn’t an option he turned to umpiring. His quick feet and running ability made him perfect for the boundary, officiating in the VFL in the winter while running professionally in summer up until 1930.

Turning his attention to his son, Wally followed John to Black Rock FC in 1946. Part of the Federal League, Wally became so involved with John’s blossoming football career; he joined the clubs committee sparking his true legacy.

From the committee to the President of the Federal League in which many said Wally pioneered. He was a true people person, passionate about others and incredibly skilled at record keeping were the cornerstones of his success. His induction to the Hall of Fame is a true testament to his character and work ethic towards the league he loved so dearly.