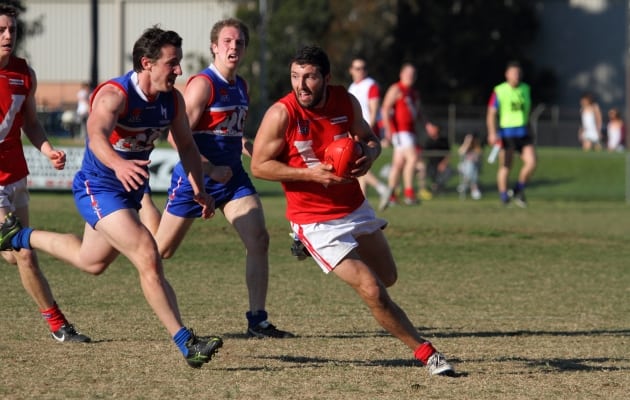 View this week’s issue of the SFNL Record HERE.

Traditional rivals St Pauls and East Brighton will meet again this week with both teams find searching for their first wins of 2016.

The largely youthful and inexperienced Vampires have been comprehensively outclassed in both its outings this season, with its seasoned veterans among its biggest contributors. There is no doubt we will see improvement in their youngsters as the year progresses, but the immediate future looks bleak.

The Dogs have been hit with injuries to key play makers in recent weeks, but will be well-served by their lay weekend and will account for the Vampires in this one.

The Bloods bounced back from their Round 1 disappointment with a clinical display against the Vampires last week in a welcome return to form.

But it will be a massive jump in class this week as they host premiership contenders East Malvern in the Division 1 game of the round.

The Panthers have been going from strength to strength with their prized recruits living up to the hype so far this season. As a result, Ben Lockwood’s boys have emerged as one of the teams to beat in 2016.

Mordialloc are always tough to beat on their home deck and will make a tremendous contest of this. However, East Malvern are looking ominous and should claim the points in a close one, despite the handicap of a five-day turnaround.

Bentleigh are another side heavily favoured to improve this year and have not disappointed the pundits with their unblemished start to the season.

St Kilda City, too, have shown improvement on 2015, but despite their best efforts still have a blob in their wins column.

This is not a game the Demons can afford to lose if they want to be counted among the contenders this year. I suspect they will be too strong for the Saints at home and improve their record to 3-0.

This local derby between the two sides in black and white looms as a nail-biting encounter.

The reigning Division 2 premiers have made a seamless transition to the top grade, notching victories in its first two games. However, both wins came against last year’s eighth and ninth ranked sides, and Clayton will no doubt pose a tougher challenge this week.

The Clays were outgunned by a superior opponent in East Malvern, but showed enough fight to suggest they have what it takes to challenge for a finals berth this season.

Tough to pick a winner in this one, but my gut feel says Clayton will just sneak home.

There were encouraging signs from the Rosellas last week, particularly in the first half as they took the fight right up to the fancied Demons. The Des Ryan game plan is certainly an exciting brand of footy, and if this can be maintained for a full four quarters, Cheltenham will surprise a few teams this year.

But Dingley remain the competition’s benchmark and will be refreshed after their week off last week. They are a class above the Rosellas at the minute and should win this one emphatically.

Round 4 is upon us and like always there are several games on the docket that intrigue me as one team will have the chance for its first win of the season.

The Heighters come into this game fresh off the bye while the Hammers will be full of confidence after a win over Highett last week. This game will be a test for Chelsea Heights as it will look for its first win over a 2015 Division 2 club. As for Hampton, the start to its season hasn’t been pretty but it will look a whole lot better if they can score an away win here.

Both teams are coming off strong wins in Round 3 and this lines up as one of the matches of the round. Caulfield has been in scintillating form so far this season with Nick Gilbert performing like one of the best forwards in the competition thus far. Defeating Skye at home is always a tough ask however, and the Bombers will be keen to continue building towards another finals run.

I’m not quite sure what to make of this game. On one hand Keysborough will be keen to bounce back after a disappointing loss to Port Melbourne but on the other hand Heatherton look like going in as favourites and has been the better team so far this season. Matt Van Schajik has been in sensational form this season and looms as the make or break player for the Tonners.

Sammy Hecker and the Dogs will be bitterly disappointed not to have tasted victory over Hampton after having more wasted opportunities than the Hammers had scoring shots. Port Melbourne on the other hand has been nothing less than perfect to start the season and has not looked like losing. Highett may be a test for them but I expect the Colts to win comfortably.

Barring a draw (and no doubt I have put a curse on this game by saying it), one of these teams will win their first game of the season on Saturday. After reaching the Grand Final in 2015, Murrumbeena has been the Fremantle of the competition in 2016 and will be looking to win a game before the Dockers when they run out against the Rockers. Black Rock will also be keen for its first win and although it is still winless, hasn’t been blown away in its first three matches.

Expect a desperate battle as the Mountain Lions and the Eagles look to land a blow against their toughest opponent.

Mount Waverley’s Luke Galle is leading the 2016 goal kicking list with 22, and containing him and James Gough will be a challenge for the Eagles.

On the other side of the equation, Doveton has the prolific Peter Dye who has booted 16 majors, along with Darren Ramsdale with 11.

Mount Waverley to win by a point.

Even against the inexperienced Lyndhurst it is impossible to tip CPL.

The Lions’ lack of depth has been exposed with the club being completely uncompetitive at both senior and reserve level.

Lightning probably won't win many games in its first season, but it should get the four points comfortably in this one.

Both sides will be doing their bit to support National Breast Cancer Foundation in this game. CPL players were a pink socks in both the senior and reserve matches, while the Lighting will don pink armbands. CPL will host also Ladies Luncheon to raise much needed funds for the foundation. CLICK HERE for more info on how you can get involved.

This game promises to be close, with Endeavour Hills and Lyndale already celebrating a couple of wins each.

Trevor Kumetaitis hitting form with nine goals in round 3 will boost the Pumas’ confidence.

However, Endeavour Hills may just edge out Lyndale, for the Falcons’ first home win in 2016.

Zain Machfud is a positive for Sandown, having contributed seven of his side's 16 goals this season.

The Cobras will need to spread the workload and find more avenues to goal to pose a challenge for Moorabbin.

Jordan Waite contributed three majors in his first game of the season, suggesting he can assist Machfud to accomplish this.

The Kangaroos will be too strong in this game, but Sandown needs to show some progress.

The Redlegs can take encouragement from their improved competitiveness in
Round 3.

The Magpies will be disappointed with just one win so far, but will get their season back on track with a percentage booster.

This game wasn’t a likely classic before the season.

But Hallam and South Yarra have both improved tremendously.

The Hawks are one of three unbeaten teams, whilst the Lions have won their last two games.

Both clubs are also performing strongly in the reserves, suggesting their lists have good depth.

Hallam has already won as many games as it did last season and has twice scored 100 points or more in 2016. It was unable to manage that last year.

The Hawks are hard to defend against, with Shane Thomas having kicked 11 goals, Andrew Daly eight and Phillip Ward seven.

For South Yarra, nobody has totalled more than six goals, and the side has a maximum of 80 points in the first three rounds.

It will be intriguing to see if the Lions’ strong backline can contain Hallam's multiple scoring options.

Hallam to win a thriller.